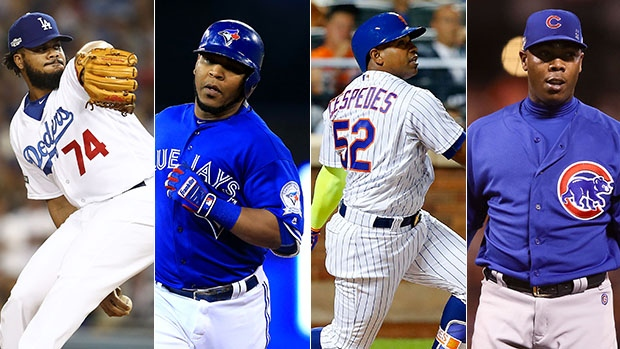 The window to accept qualifying offers has closed, meaning it is time to get into the heat of Major League Baseball’s free agency.

This means it’s time for teams to spend money like they are playing Monopoly.

Along with these outfielders, quality catchers and relievers pack the market. However, a few dominant starting pitchers are in this year’s batch as well.

A number of power hitters compensate for what the starting pitching market lacks.

In fact, the five most prolific power hitters have a combined 1,584 home runs. Two of these five, Bautista and Edwin Encarnacion, are current Blue Jays. The duo has a combined 628 home runs over 25 total seasons.

Toronto already compensated for the potential loss of these hitters by signing designated hitter Kendrys Morales. The former Kansas City Royal agreed to a three-year, $33 million contracts with the Blue Jays.

Although Morales clubbed 30 home runs in 2016, he is a one-dimensional player. His defensive skills are lackluster at best. Of the entire season, Morales only played 12 games in the field.

Altogether, Morales will earn $11 million annually for his power. This salary slates him to be the fifth highest paid designated hitter in the league. He will make $5,800,000 more than the sixth best compensated designated hitter.

The hefty precedent set by Morales’ deal sets the expensive market for power hitters this year.

The Baltimore Orioles have a group of sluggers on the block who could command even more of an investment than Morales. The 2016 league leader in home runs, Mark Trumbo, the switch-hitting catcher, Matt Wieters, and the platoon designated hitter, Pedro Alvarez, are all available this offseason. The trio combines for an average of 84 home runs per season.

Only one thing is certain this winter: Power is Plentiful.

Power isn’t only found in the hitting market. The available relievers provide the same power.

Closer Aroldis Chapman provides the most obvious case of this pop. He led the major leagues with an average fastball velocity of 100.4 MPH. Chapman also threw the 29 fastest pitches in 2016. The current Chicago Cub hurled 49 of last season’s 50 fastest pitches. His unprecedented velocity caused MLB to put a “Chapman Filter” option in the fastest pitches section of their website. Selecting this filer removes Chapman’s statistics from the data, giving a true representation of the league’s fastballs.

The 28-year-old doesn’t only sling the ball remarkably fast. He also converts. Chapman has converted 105 saves in his last 113 chances since 2014. This combination of speed and reliability is sure to cost his suitors.

The most recent reliever to have a run like Chapman in a contract year was former Baltimore Oriole Andrew Miller in 2014. Miller signed a four-year contract with the New York Yankees worth $36 million. Chapman’s fastball should earn him a deal similar to Miller’s. Chapman has drawn interest from the San Francisco Giants and Los Angeles Dodgers.

Los Angeles are in the market for a closer due to Kenley Jansen becoming a free agent. Jansen’s biggest advantage is his ability to throw strikes. The Dodger has averaged more than 13 strikeouts per nine innings in each of his seven seasons. The National League Reliever of the Year has thrown strikes on 70 percent of his pitches for the last three seasons.

What will prevent teams from jumping at Jansen is the draft pick compensation tied to him. By denying the Dodgers’ $17.2 million qualifying offer, Jansen forced whatever team he signs with to surrender their 2017 first round draft pick to Los Angeles. Teams will likely avoid signing a closer tied to draft pick compensation, as doing so would risk the club’s future for a small piece of their puzzle. Teams will probably look toward fellow closer Mark Melancon first because he did not receive a qualifying offer.

Melancon, the current National, makes his living off his knuckle-curveball. Opposing hitters own a .148 batting average against his curveballs. In 2016, batters hit ground balls on 84.2 percent of those knuckle-curves they put in play. In comparison, the league average for ground ball percentage was 44.7 percent.

Piecing this dominance together allowed Melancon to save 47 games in 2016. Only New York Mets closer Jeurys Familia earned more saves in 2016 than Melancon.

The 31-year-old earned $9,650,000 last year and he still has a few years left in his prime. Melancon’s experience and lack of draft pick compensation have him in line for a sizeable payday. Expect him to receive $10 million annually in a multi-year deal.

Teams in need of late-inning relievers are in luck this offseason.

On the other hand, starting pitchers worth investment are nearly nonexistent. The top pitchers in this year’s class all will be on the wrong side of 30 by early April.

The pitcher with arguably the most stock, Rich Hill, will be 37-years-old by opening day. His age causes questions of the durability of his 2016 success.

Other veteran pitchers available were former Met and Bartolo Colon, 43, and former Blue Jay R.A. Dickey, 42. The two pitched to ERAs of 3.43 and 4.46, respectively.

The Atlanta Braves removed Colon and Dickey from the board on consecutive days. Atlanta signed Colon to a one-year, $12.5 million contract, while Dickey agreed to a one-year, $7.5 million deal. The contract includes a club option for the 2018 season and a $500,000 buyout should Atlanta elect to opt out.

Aside from these aged starters, Ivan Nova and Andrew Cashner are serviceable pitching options. Both have unstable pasts with stints of success. These two gambles are viable candidates for small market contenders and teams rebuilding in need of an inning-eater.

The most consistent free agent pitcher was Philadelphia Philly Jeremy Hellickson. He owns a 3.90 career ERA and averages 194 innings per 162 games. However, Hellickson accepted the $17.2 million qualifying offer from the Phillies, keeping him in Philadelphia for at least one more year.

Power hitters will fly off the market this winter. However, since many declined their qualifying offers, the middle tier of hitters will likely sign quicker. The sluggers tied to draft pick compensation should start to fall off the board in late December and early January.

Teams will swiftly lock up relievers. Rumors already surround the best bullpen pitchers. The amount of talent this year will call for more multi-year signings than usual. The evolution of the typical bullpen calls for power pitchers and strike throwers. Relievers will be in high demand.

As for the starting pitching class, it lacks big-name stars. This will cause the average at best pitchers to increase their price. Clubs seeking starters will have to overpay and will be stuck with unworthy contracts.

138 days remain in baseball’s offseason, and free-agent prices are bound to soar like a Monopoly jackpot. Who will come out on top? The road to the 2017 World Series starts here.