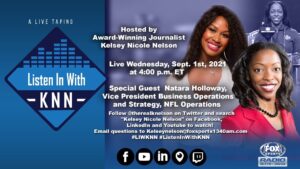 On one of the most recent editions of “Listen In With KNN” sports talk radio/podcast show presented by FOX Sports 1340AM/96.9 FM, executive host and producer Kelsey Nicole Nelson was joined by Natara Holloway, the Vice President of Business Operations and Strategy for NFL Operations.

During their conversation, Nelson and Holloway spoke a lot about the game of football and the opportunities it presents for all kinds of people, especially students who come from Historically Black Colleges and Universities (HBCUs).

“We all know in the last year there’s been a lot of corporate attention to HBCUs and I’m like ‘bring it on, welcome, we welcome it!’ but at the same time for the National Football League…we get a lot of criticism in a number of spaces regarding diversity…we’ve been doing partnerships with HBCUs for years,” said Holloway.

As part of the NFL’s initiative to better serve the Black community, the NFL Football Operations hosted its second NFL + HBCU Open House to help educate students attending these colleges and universities and to inform them of ever-growing opportunities.

Holloway joined the show right after the Open House wrapped up to reflect on the success it was. “It was almost like a two-day workshop of us [the NFL] listening primarily and trying to come up with opportunities for us to get better over the next year,” said Holloway.

The Open House’s main goal was to educate its attendees on opportunities available to them. Many outsiders focus on the amounts of money the league and other organizations donate to HBCUs.

“It wasn’t about money, it was about opportunity, access, exposure, getting the student-athletes aware of the things that could potentially lead to careers in sports and/or football…that’s what we were really focused on: job creation, job awareness, job readiness…that was number one,” said Holloway.

Nelson then asked Holloway how she got involved in supporting HBCUs in her role. “It’s one of those things where you don’t grow up in Texas without knowing about HBCUs…everybody has a connection…you didn’t have to go to a HBCU to also impact an HBCU,” said Holloway.

It’s important that we are all making an effort to support HBCUs. This is something that Holloway emphasized, “If we only relied on individuals who had gone there [HBCUs]…then you’re only talking to yourself. It is upon people who did not go to HBCUs, Black, White, or anything in between, to also impact HBCUs.”

Holloway reflected on her purpose for melding the National Football League’s Operations department and HBCUs. “I am such an advocate for showcasing the talent that African Americans and students of color bring to the table and that’s what HBCUs do,” said Holloway.

Nelson and Holloway then spoke about what the season ahead holds for the NFL’s Football Operations department. “The Open House..was the beginning of this season. We have an exciting, exciting year planned ahead of us. From the Madden Tournament to the Careers in Football Forum to HBCU Week to the Battle of the Brains, there are many touchpoints across the calendar,” said Holloway.

Lastly, the two spoke about Holloway’s extensive background working in the NFL. Prior to being the Vice President of Business Operations and Strategy at NFL Operations, Holloway worked on developing the audit and accounting department, the corporate development group, consumer products group doing marketing and retail, and strategy for youth football for the NFL. “The thread that weaved my career, my 17 and a half year career, is that I took chances and raised my hand for things that were league priorities…it was around using my skills set in audit and accounting to raise my hand to do things that were challenging,” said Holloway.

“Now for me, my legacy is not around all the notches on the belt if you will, but it really is about how do I help to develop the young people that are coming with me. I don’t say behind me, I say with me…they’re the next,” said Holloway, surrounding how she wants to continue breaking barriers and blazing the trail for the next generation in sports.

To hear more about Holloway and the NFL’s involvement with HBCUs, check out the full episode below! The Strengthening HBCUs section has many opportunities for you to get involved during the season and beyond. Don’t forget to stay tuned to the NFL Operations Facebook and Twitter!