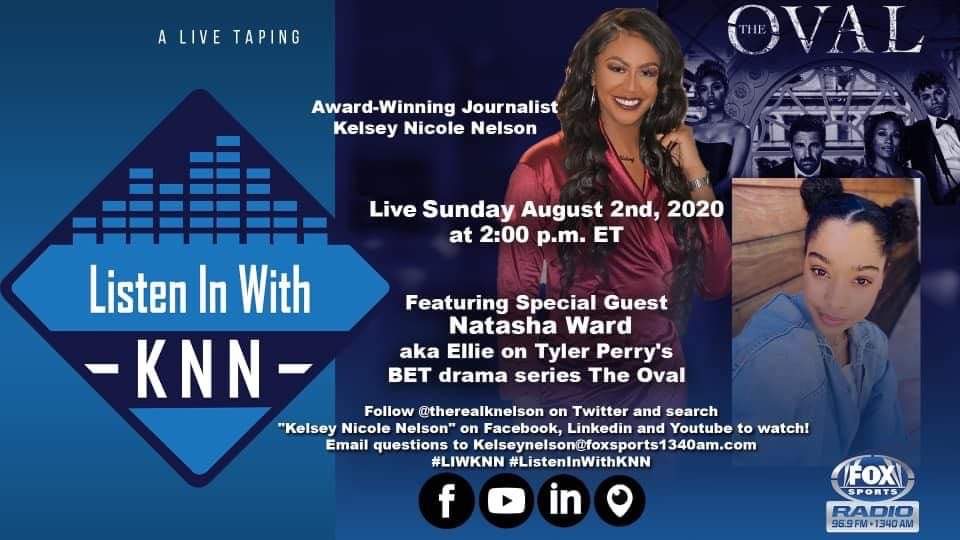 On the latest episode of Listen In With KNN on Fox Sports 1340AM, host Kelsey Nicole Nelson welcomed Natasha Ward, who is known as Ellie Lyles on Tyler Perry’s BET drama series “The Oval” to the show.

Speaking of her journey, she had no plans on becoming an actress. Ward attended UC Irvine where she ran track and majored in Political Science and Education with an emphasis on Women Studies. Her goal was to get into politics and become the next Ruth Baden Ginsburg. But that didn’t happen as she got recruited as a model a few years ago and opportunities began opening up for her.

As a result, Ward got an audition as an actress on Tyler Perry’s BET drama series “The Oval.” She did a test read with Ed Quinn who was already casted as the lead on the show. A few months later, she accepted an offer to play the role of Ellie Lyles. Her character came off as a stereotypical pretty girl but was more than the physical appearance.

“As I dug more behind that, I discovered that Ellie is in an environment where her looks are going to subject her to having to deal with things that other women wouldn’t have to deal with. It’s a story that so many young women can relate to whether or not your exterior enters the room before you do,” Ward said. “The obstacle I was going to have to overcome as an actress was my own body. It’s going to be on my terms.”

What she loved about acting was that she could read a script a million different ways. However, working with director and producer Tyler Perry was no easy task.

“He knows what he wants and is a well-oiled machine. Working with him is definitely a challenge in his pace and the way that he works. I’m grateful that as a newer actress to have been put in this situation because it’s very unorthodox,” Ward said. “To step into my career gives me a lot of confidence to know that when I go on to other productions where there’s a completely different way of doing things, I’ll be able to do anything.”

With the structure in place at “The Oval,” Ward was able to have success and at the same time get along with her cast mates.

“Everyone on the cast are such incredible people and really down to Earth. It’s so essential to work with people who you can really trust and be vulnerable with to allow yourself to step into that headspace. Getting to know each other as humans apart from actors on a show is really special and something I’m so grateful for,” she said.

As a former college track runner, Ward learned a valuable lesson which she brought in her acting career.

“What I have taken away and brought into my career the most is that mental toughness knowing in this career where you get rejected and knocked down every single day. To have that sports mentality is to really be able to always come back. Rejection is God’s protection.”