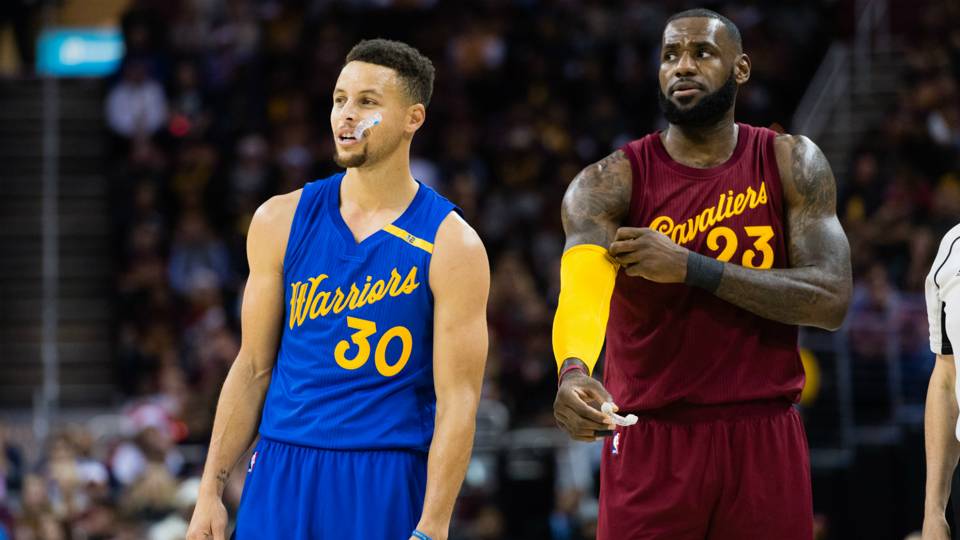 Round Three is here ladies and gentlemen. The gloves are off, the banter is laid aside. It’s time to put up or shut up.

After dominant postseasons produced by both the Cleveland Cavaliers and the Golden State Warriors, the two will tango with everything on the line. We all remember the historic series between both teams the last two NBA Finals. Now there are considerable twists that comes into play, from the ultra-talented Kevin Durant being a major player in this series in favor of the Warriors to this same Warriors trying to win a championship without their excellent head coach in Steve Kerr.

The two teams have split the regular season series 1-1 this past season but now the Larry O’Brien trophy is at stake between the two squads once again. Let’s preview Thursday night’s Game One contest in Oakland, California.

Of course, everything begins, ends, and revolves around SF LeBron James. Statistically, James may be coming off his best playoff stretch in his 14-year career. James has averaged 32.5 points per game this postseason and is fresh off a 35-point, eight rebound, and eight assist performance in the Game Five victory over Boston to help clinch the series, 4-1. James averaged 29.7 PPG against the Warriors in last year’s Finals matchup, on his way to Finals MVP. The spotlight is often on James but the Cavaliers defense is equally under the microscope after the team allowed an average of 106.6 PPG during the regular season and 103.2 during the playoffs.

There is a clear and precise difference between the Cavaliers of the regular season and the Cavaliers of the playoffs. During the regular season, Cleveland found themselves on the losing end to the Heat, Pelicans, Kings, Pistons, and Mavericks or as I like to put it, non-playoff teams. Coincidentally, 20 of the team’s 31 losses during the regular season have come away from the friendly confines of the city of Cleveland. On the other hand, the team is undefeated on the road in the postseason and now find themselves kicking off the championship round in a place where they are greatly “welcomed”.

The veteran, championship-minded San Antonio Spurs? Well that was quick.

The Warriors have approached every challenge in front of them this postseason with the mindset to steamroll and that is exactly what they have done. The best start in NBA postseason history (12-0) belongs to this versatile bunch. The team is led by the tag team of PG Stephen Curry and SF Kevin Durant, who have combined for 53.8 PPG during the playoffs, with both shooting over 50% from the field and 41% from behind the arc.

The missing piece to the puzzle is SG Klay Thompson. Why he has struggled this postseason may account to the fact that Durant in the picture along with his shot just not being reliable at this point. That will have to change during this series or the Warriors will truly be missing an essential weapon. Interim head coach Mike Brown now has the task of steering this quality vehicle of a team against a team he is quite familiar with. Brown being inserted may have resulted in the Warriors holding opponents to 41.6% shooting this postseason as defense has always been his forte as a former head coach. A developing storyline has Brown going up against a player in LeBron  (who he coached for five seasons) and a Cavaliers franchise that gave up on Brown on two different tenures.

Don’t let anyone confuse you. This is a rivalry. Maybe not one along the same lines of the leagues historic rivalries such Knicks-Celtics or Celtics-Lakers but it is a growing one nonetheless. Based on the way the regular season and postseason have played out, this has been a highly anticipated matchup for quite some time.

Much of the series will ultimately fall on the shoulders of the Cavs trio in James, Irving, and PF Kevin Love (17.2 PPG) along with the Warriors combination of Durant, Curry, Thompson, and PF Draymond Green (13.9 PPG). The Cavs definitely will be fueled by the fact that the team overcame a 3-1 deficit in last year’s Finals and when clicking on all cylinders, able to win it all again.

To counterpunch, the Warriors took Game 1 in last year’s Finals, 104-89, and also earned a Game 1 victory in the 2015 Finals at home. Speaking of clicking all-around, the Warriors have been pretty spot on this postseason and the added chip on the shoulder from losing the Finals last year is visibly clear.

For the third Finals in a row, the Warriors begin the series at home and will in all likelihood have an energized crowd, a tad bit more rest, and an anxious Kevin Durant ready to help validate his tactical move of joining the Warriors this past summer. It is an oft-ignored stat but rebounding is extra vital this series with both teams ranking in the top 12 during the regular season. Getting off to a hot start is a must for Cleveland and hot starts have been a trend for them this postseason. A back-and-forth contest compels us for four quarters until the deeper Golden State bench and the arrival of Thompson proves to be the difference.