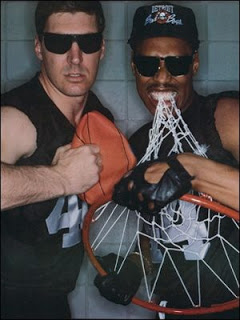 Today, I would like to take the time to explore NBA History and analyze each decade to see who was the Greatest Player of each time frame. I will break down the time period that each player was at their most dominant. Players are seen by their fans all across the world as Emperors and Kings when they dominate. It will be a “Game of Thrones” kind of approach so to speak. So please join me if you will on this journey through time. 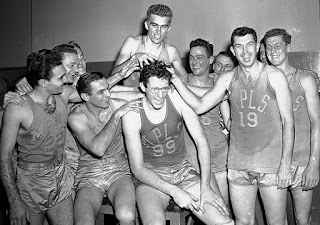 During the Genesis of the NBA Monarchy, King George of Minneapolis ruled the Basketball Kingdom with sheer force as he laid waste to his competition. Mikan was the first Emperor of Basketball as he led his Lakers of Minneapolis to 5 NBA Championships. King George may not have looked intimidating, but he struck fear into the hearts of those that would stand in his way.

As King Mikan would relinquish the throne in 1954, the Basketball Kingdom would go through a transitional phase. The likes of Bob Pettit, Bob Cousy, Dolph Schayes and others would have moments where it seemed like they would be the successor. However, 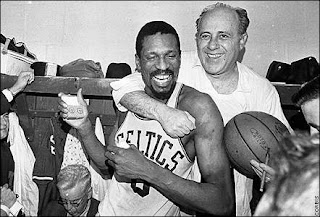 In the Summer of 1956, Emperor William the Conqueror entered the Basketball world and revolutionized Defense in a way that was never seen before or seen since as his Emerald Kingdom of Boston known as the Celtics would build a Wall of Defense around the NBA Crown for the Entire Decade of the 1960’s. The Celtic Kingdom led by Elder Council Arnold the Red, Russell would elevate a race of people that were once seen as unfit to rule the Basketball world. King William would break many barriers during his reign by winning 11 Championships with 8 straight in between. He would also make history as the first Player/Coach. Russell would also win 5 MVP Awards while conquering fellow Giant Wilt The Warrior. William is the only King/General to never fall in a 7-game do or die battle. 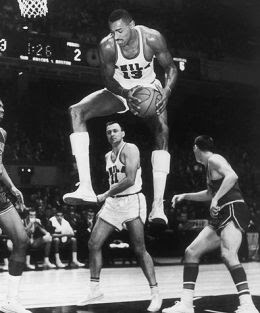 As Emperor Russell ruled the NBA with an Iron Fist, there was another Giant that had his own throne as he pillaged opponents with Brute Strength and Force. King Wilt the Warrior was unlike anything that Russell and others had ever seen. Wilt broke ground as the first dominant 7-foot Giant with monster like athleticism and power. They knew that he was coming, but could not stop him. From the moment young Wilt arrived on the landscape in 1959-60, he dominated and destroyed his adversaries by winning both the MVP and Rookie of the Year in the same season. King Wilt would continue to leave a trail of bodies in his wake when he averaged 50.4 PPG, along with an unprecedented 100 point game as his Warriors would defeat the Knicks of Yorkshire on the 2nd of March of 1962. However, King Wilt’s only weakness was that he lacked a consistent army that he could assemble to capture the Basketball Crown. For the first 7 Seasons, King Wilt was seen as the best Individual Player, but it wasn’t until 1967 where he put the Basketball Kingdom on notice by showing that he can win with the best team around him. That season, King Wilt would win the first of 3 consecutive MVP Awards as his army of 76ers carried the Spirit of ’76 to victory by winning his first NBA Championship. On his road to victory, King Wilt finally defeated his arch-nemesis Emperor William Russell as the Sixers eviscerated the Celts and their Emerald Kingdom.

By this time, the NBA Kingdom was going through another transitional period. Emperor William Russell relinquished his throne after winning his final war against the Lakers of Los Angeles led by King Wilt and Jerry of the West. In between this time, there would come another Giant that would reign across the Basketball World, Alcindor the Wise (later known as Kareem). Young Lew would dominate in his first season as he would win Rookie of the Year, nearly shades of King Wilt a decade earlier. However, neither of them could claim the throne as King. Wilt battled injuries and Alcindor faced inexperience. At this time, the Yorkshires of New York would claim supremacy as Willis the Unbreakable would defeat the Los Angeles Lakers in seven games. The Celts would also be taken over by Sir John Havlicek. 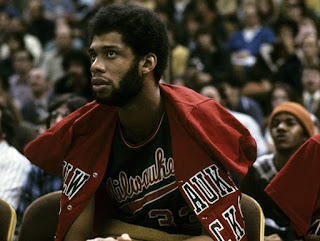 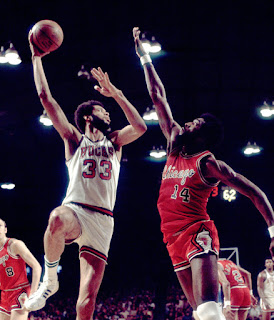 In an Era of a new Basketball Renaissance, the Basketball Universe witnessed a new exploration as players would explore more colorful worlds. Meanwhile, in the NBA Kingdom, the stoic discipline of Alcindor the wise would win out. In 1970-71, Alcindor would gain a new ally in legendary soldier Oscar the Great as he would lead the Bucks of the Native Milwaukee to an NBA Championship while winning Finals MVP. That season, he would also win his first Scoring Crown and first of a remarkable 6 MVP Awards. Shortly afterward, Alcindor would change his name to Kareem after converting to the Muslim Religion. Even with a new name, Kareem was still the same Captain that would overthrow opponents one Sky Hook at a time. During his reign of dominance in Milwaukee, Kareem would win another Scoring Title along with two more MVP Crowns. Soon, things would begin to crumble in the Land of Milwaukee. Oscar the Great would retire, and Kareem the Wise would soon need to migrate for cultural reasons. As things in Milwaukee would decline, Kareem the Wise would move to the Western Town of Los Angeles where he would continue his dominance despite a struggling army around him. 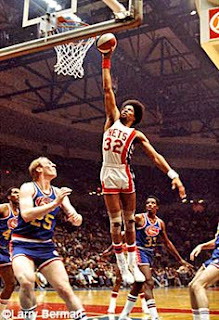 As Kareem the Wise dominated with Discipline, there was a completely different world in the Basketball Universe that was discovered. This world was filled with many colors, mainly Red, White, and Blue. This animated world was ruled by Julius the Doctor, King of the far away colorful land of the ABA. Julius ruled this world with his royal Scepter and his Red, White and Blue robe. This was a land of creativity, freedom, and expression as Julius became an innovator within the Basketball Universe. Even as Kareem struggled Julius The Doctor prospered in the Land of the ABA, as he led the Nets of Yorkshire to two ABA Crowns. King Julius would then take his talents to the Holy Land of Basketball known as Philadelphia as he would join the Sixers of 76. However, Julius the Doctor would show signs of vulnerability as his army would fall to the likes of the Blazers of Portland.

After a long and prosperous reign, Kareem the Wise while not yet ready to relinquish power was under too great of an attack to hold the keys to the Kingdom on his own. Meanwhile, two young princes would come across the horizon to take the Basketball Universe by storm with their arrival in 1979. One prince was Earvin the Magician and the other was Larry the Legendary. Young Prince Earvin would travel from the land of Spartans to join Great King Kareem with the Lakers in the City of Angels to rejuvenate a once proud Kingdom. Larry the Legendary traveled from the farmlands to join the Celts of the Emerald Kingdom of Boston to continue his rivalry with Earvin, the one they called “Magic”. There was also a Man-child of promise named Moses deep in the heart of Texas that would dominate the Basketball Landscape before joining the Basketball Holy Land of Philadelphia (known as the City of Brotherly Love). Moses would help Julius The Doctor lead the Sixers of Philadelphia to the Promise Land of Hoopdom. 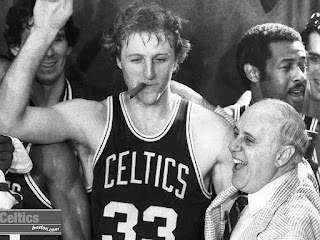 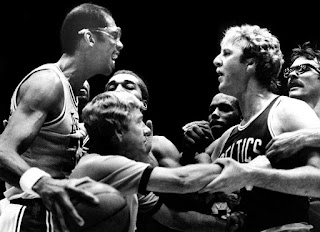 Upon his arrival in 1979-80, Larry the Legendary would make his presence known in the Emerald Kingdom as he took the dormant Celts from an abysmal 29 wins to 61 wins, earning Rookie of the Year Honors. The young Warrior would give an encore the next season as he would lead the Celts of Boston to another NBA Championship in 1981 as they would defeat the Rockets of Houston led by Moses the Man-Child. In 1984, Larry the Legendary would cement himself as the Supreme Ruler of the Basketball Kingdom by winning his first of three straight MVP Awards. He would close that campaign by conquering arch nemesis Earvin the Magician and the Lakers of Los Angeles. The Celts of Boston would rule the East with a variety of long and short-range attacks as Larry’s star continued to grow brighter. No matter the challenger, the Mighty Ruler of the Emerald Kingdom would lead his troops to victory. His greatest soldiers were Sir Kevin and Robert The Chief. 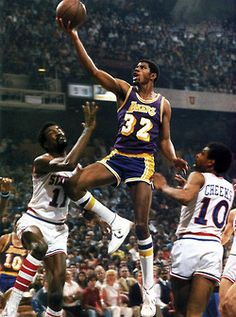 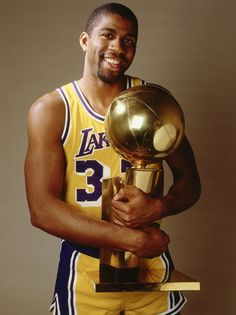 As Larry Legend ruled the East, Prince Earvin the Magician ruled the Western World with the Lakers of Los Angeles with Kareem the Wise King. Young Earvin used a variety of attacks and tricks that would captivate the fans and terrify the opponents. As Kareem fell to injury in the 1980 Finals, Prince Earvin would lead the troops to victory over Julius the Doctor and the 76ers. In the 1982 rematch, the Lakers of Los Angeles would cement their place on the Western Throne as Earvin the Magician would conquer the 76ers of Philadelphia once again in the Finals. The Sixers would gain their revenge with the addition of Moses the Man Child in 1983. Prince Earvin was truly a Wizard with the Basketball, with his genius and creativity on the Hardwood. His battles with Larry the Legendary were Epic as they dethroned the Emerald Kingdom of the Celts twice, in 1985 and finally in 1987. After vanquishing Larry the Legend once and for all, Earvin the Magician was the Undisputed King of Hoopdom. Hiding behind the charismatic smile was a competitive fire that would destroy you if you gave him the chance. When the sun set on the Golden Decade of the 80’s, the Lakers were the Great Western Dynasty and the Celts were the Emerald Kingdom once again. During this reign, other young future princes would arrive onto the Basketball Kingdom in 1984. One of them was a Prince from Nigeria with a Dream, and another would shake up the World of Hoopdom with his gift of Flight. 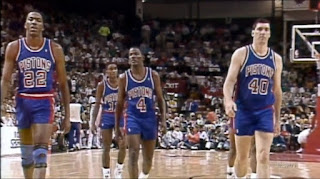 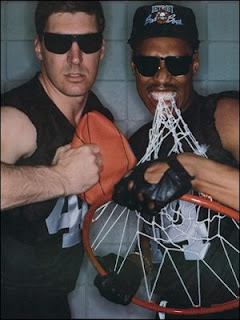 With the Sun setting on the reign of the great Princes of the East and West, an Army of Barbaric Invaders would arrive from deep in the Mid-Western Land called the Motor City. This army was more cruel and ruthless than anyone that has come before or since. A vicious, bloodthirsty group with savage names like Zeke, Lamb, Spider, Worm, Microwave and Joe (not all names were evil). These Motor City Barbarians would destroy the Emerald Kingdom of Boston while destroying the Lakers Great Western Dynasty en route to planting their Red, White and Blue flag on top of the Basketball Mountain. The Motor City Barbarians would rule the throne at they would hold up the inevitable on coming Air Assault from a futuristic Jedi like Warrior that no one could have ever seen come. Make sure to look out for Part II of our journey through history. 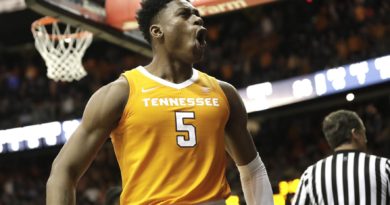 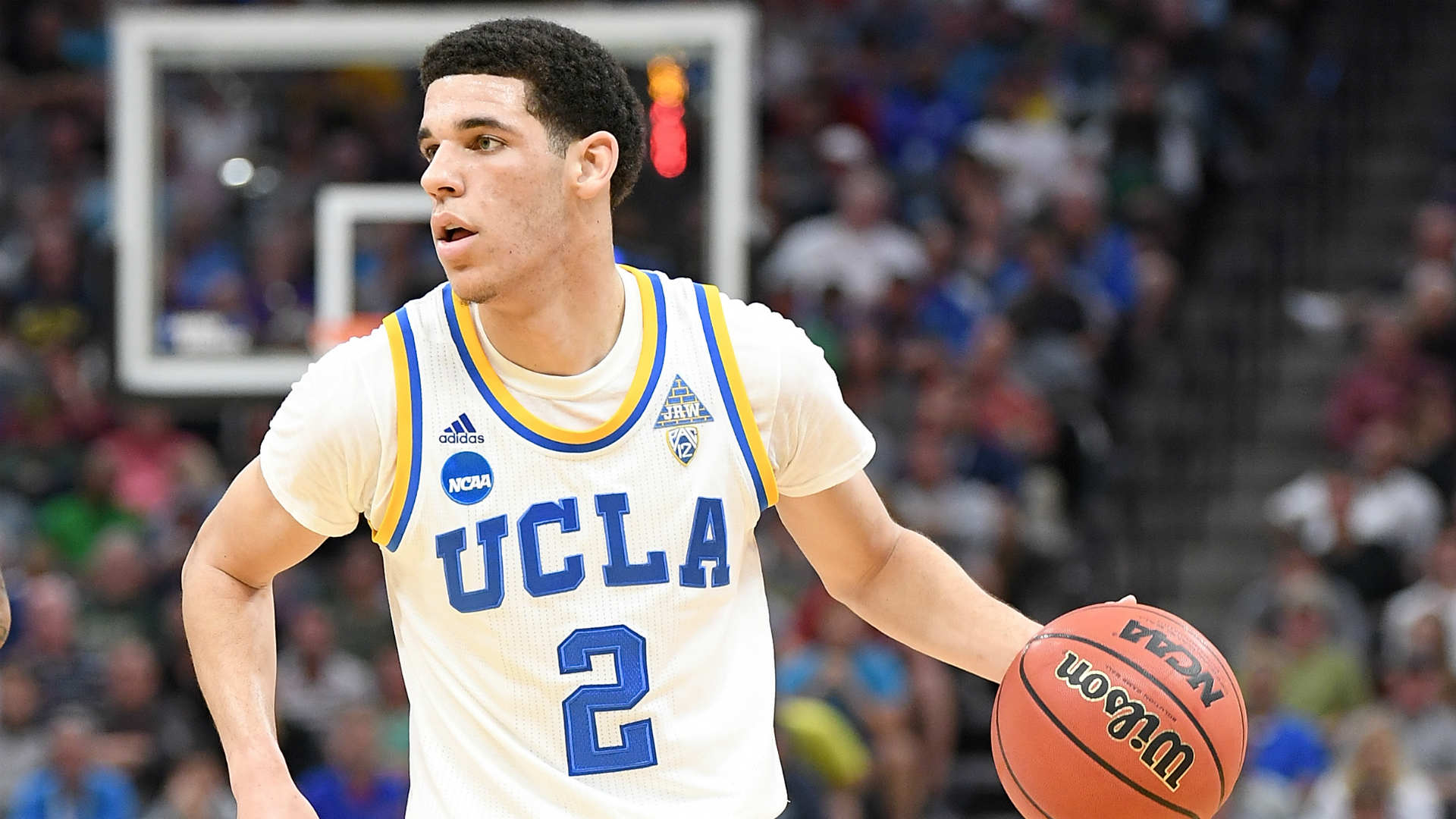 LaVar Ball, similar to President Trump, is good for Journalism 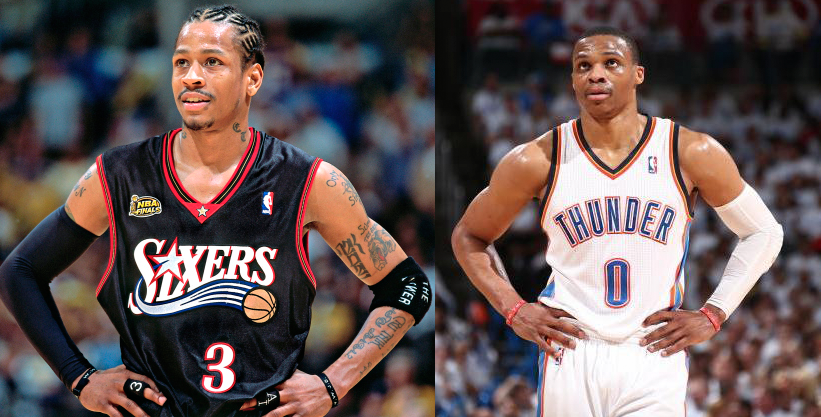 Iverson and Westbrook: Looking In The Mirror