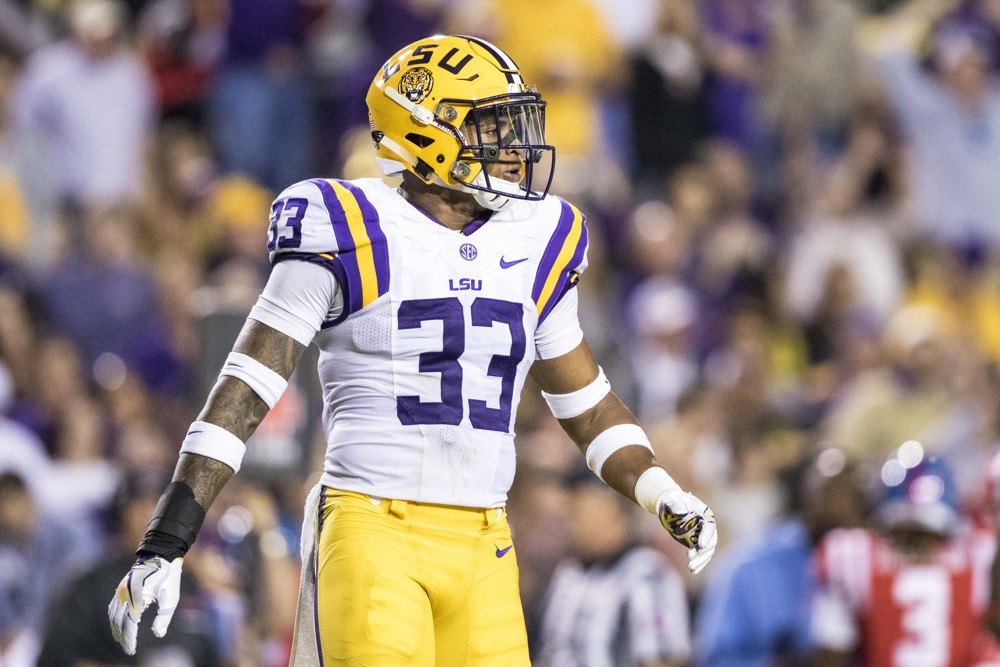 The 2016 Defensive Rookie of the Year was slightly unexpected. While Los Angeles Chargers defensive end Joey Bosa did string together a productive season, it was hard to envision that with the former Buckeye sitting out of training camp due to a contract dispute. Once that hurdle was cleared, Bosa made his mark on the league.

Which defensive players from this year’s draft put together a potential Defensive Rookie of the Year campaign? These considerations are based on the talent the prospects have along with the state of affairs that they are placed in with their respective teams. Let’s look at the possible candidates.

LB Jarrad Davis, Detroit Lions – As the 21st overall pick in the draft, Davis is expected to deliver some production in the middle of the Lions defense. He has not even taken the field as a Lion yet but Davis is arguably the most talented linebacker on the roster now. Athleticism and impressive instincts are the name of the game when it comes to describing his overall game. Davis is expected to be a day one contributor and has under-the-radar potential as DROY.

S Budda Baker, Arizona Cardinals – It is interesting that the Cardinals made this selection early in the second round, especially with a similar talent (FS Tyrann Mathieu) already entrenched within the defensive scheme. The instinctive Baker has some of the best ball skills in the entire draft and will be hard to keep off the field. Baker is a playmaker and if he can produce considerably in this skilled defense, he will deserve a nod.

DL Malik McDowell, Seattle Seahawks – McDowell had a pre-draft ceiling as a mid-first rounder but found himself as an early second round pick. His aggressiveness will get him playing time in Seattle and his versatility will earn him plenty of opportunities. McDowell was one of the most talented interior disruptors in the draft and his ability could make him one of the team’s best defenders by season’s end.

DE Takkarist McKinley, Atlanta Falcons – His passionate speech after getting drafted by the Falcons late in the first round showed how intense McKinley is. The Falcons needed another pass rusher to team with Vic Beasley Jr. in Atlanta and terrorize opposing quarterbacks. McKinley needs a little more development but his insane short area quickness and contagious motor will be a handful for opposing offensive linemen.

Defensive Rookie of the Year Candidates

LB Rueben Foster, San Francisco 49ers – Pre-draft dilemmas led to a free fall for the talented Foster, who many considered the best pure inside linebacker in the entire draft and a top 10 overall talent. Foster was selected 31st overall and the 49ers walked away with a day one, game one starter at inside linebacker. In the 49ers scheme, Foster will have an opportunity to free flow and be a vacuum at linebacker. Don’t be surprised if Foster is knocking on the door of triple-digit tackles this season.

DE Myles Garrett, Cleveland Browns – The first overall pick has more than enough talent to take the league by storm in year one. Garrett will be the cornerstone pass rusher for the Browns and a pillar on the that side of the ball that the Browns have not seen in quite a while. Garrett is the best player from this draft regardless of position and face tremendous pressure as the face of the Browns. That does not mean the shoulders of the 6’5 273-lb freak athlete are not large enough to carry that burden.

S Malik Hooker, Indianapolis Colts – The Colts never expected to have a ballhawking free safety like Hooker to be available when the Colts were on the clock at 15th overall. So the Colts could not pass up taking a player such as Hooker, who sparked flashbacks of NFL legend Ed Reed. Hooker nursed a shoulder injury that led to his fall in the first round but make no mistake, Hooker has the talent to lead the league in interceptions. A big defensive play waiting to happen.

S Jamal Adams, New York Jets – If Hooker was considered the best safety in the draft, Adams was not far behind. Adams is versatile and capable of playing strong and free safety, along with a little slot cornerback. In New York, Adams will be the team’s strong safety and is a clear upgrade at the position. His ability to fly upfield and always have a hand in tackles makes him a prime candidate for a big year in 2017.

DL Jonathan Allen, Washington Redskins – Allen was another prospect on this list that saw a first round tumble. For Washington’s sake, Allen’s consistency as a disruptor was too good to pass up. At this point, he is probably the best defensive lineman on the team and is an easy candidate for a 10-sack season. Allen’s Combine was not the greatest in the world but throw on the tape and Allen is a top-8 overall player.