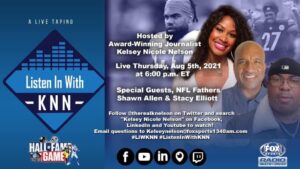 On one of the latest episodes of “Listen In With KNN” sports talk podcast/radio show presented by FOX Sports Radio 1340AM/96.9 FM, host Kelsey Nicole Nelson was joined by National Football League (NFL) fathers Stacy Elliott and Shawn Allen.

Nelson, Elliott, and Allen spoke prior to the 2021 NFL Hall of Fame Game where the Pittsburgh Steelers played against the Dallas Cowboys in the iconic location of the Hall of Fame in Canton, Ohio. Elliott’s son is Ezekiel Elliott who is a running back for the Cowboys and Allen’s son is Marcus Allen who is a linebacker for the Steelers. Despite their sons playing against each other on the field, both fathers are close friends who have guided each other in their sons’ journey.

“We are really, really good friends. Shawn is one of my best friends…he’s been a great person in my life. As a father, it’s always good to get advice and counsel as we walk this journey with our children.” said Elliott. Allen continued on to say, “We had to do that quite frequently. I have leaned on him more than I can count and I appreciate that.”

Nelson also asked them both how proud they must be for their sons and the growth they’ve had in the NFL. Elliott said, “Words really can’t even explain what it means to me to be a father of such a great young man and I’m just proud of his progression in the NFL. Coming from the Ohio State University, he’s matured so much.” Allen agreed with Elliott and replied, “It’s a process. I’m proud of him as well [on his son Marcus Allen]. We’ve come a long way, from Little League, high school, college, to where he is right now. it was an awesome process and I’m extremely proud of the man he evolved into also.”

The 2021 NFL Hall of Fame Game kicks off the start of preseason and the start of football! Nelson asked what the preseason games mean to players and Allen answered, “It’s an opportunity for the young guys to make their mark in the NFL and show why they should be on the final 53 man roster…so I’m rooting for all those guys on both teams to show that they belong.” Nelson noted that his son (Marcus Allen) followed a similar path by getting drafted, playing in the preseason games, to then becoming part of the final roster.

Both fathers also spoke about their sons’ start in football. “He was about five years old so I took him out to flag football… I’m pushing him, I wanna sit on the sideline and root for him, and then another little boy threw the ball and hit him in the face and he quit…a few years later he came back to me and he wanted to play again and the rest is history…”, said Allen.

“It always was his [Ezekiel] goal. And why wouldn’t be? You wanna be the best and play at the ultimate level. For me as a father, to be honest with you, I didn’t know Ezekiel Elliott arrived until college sophomore year…I said ‘Wow, this guy, Ezekiel Elliott, has arrived…”, said Elliott as he proudly wore the 2014 National Championship ring and anticipates a Super Bowl one soon.

As two Black fathers in America, Elliott and Allen have had to train their sons for the real world, which can be more intense for an athlete. “You have the social pressures, and you also have to deal with people telling your son how great they are all their life and at some point, they start to believe it. And it’s your job to bring them back to reality and keep them focused and grounded…that was the root of a lot of our [Elliot and Allen] conversations. Sometimes, that’s extremely hard to do.” said Allen.

Elliot also spoke about the topic, “One of the first things I did was I taught him to respect everyone…Respect law enforcement no matter what the situation was because it allows you to live another day. It was difficult at times because when he became a star, people would literally walk past me and talk to my son like if I don’t exist and so that was difficult.”

Allen spoke about fatherhood and what it’s meant to him, “It’s an awesome honor. It’s a huge responsibility. And if you do it right, it’s a great reward.” He also spoke about the importance of being a good father because that example can influence other fathers who may be struggling.

Towards the end of the show, Elliott and Allen spoke about their sons’  current training camps and their excitement for the season to come. “I’m from Pittsburgh so I’ve always been a Steelers fan…The organization is everything that you hear about…the relationship between the players has really evolved and Marcus helped bring that to Pittsburgh like he did at Penn State. They genuinely love and care for each other and I think that is the foundation of winning,” said Allen after visiting the Steelers’ training camp the week before.

And with training camp and the start of preseason games, that chatter has begun about who experts and fans think will come out of top each division. “I’ll tell you what, God willing, if everyone can stay healthy, watch out NFC East. Watch out NFL… The Dallas Cowboys are hungry. Everyone’s hungry. Cowboys Nation is starving for a championship…if we ain’t playing for championships, we ain’t playing for nothing,”, said Elliott.

If you’d like to know more about Nelson’s conversation with Stacy Elliott and Shawn Allen, watch the episode below. You can catch Elliott’s and Allen’s sons on the field during the NFL season and also get in touch with their fathers on social media: Stacy Elliott Instagram, Stacy Elliott’s Twitter, Stacy Elliott’s Facebook, and Stacy Elliott’s LinkedIn. Also, be sure to check out Elliott’s “Fifth Down Management” which helps manage athletes and their brands.