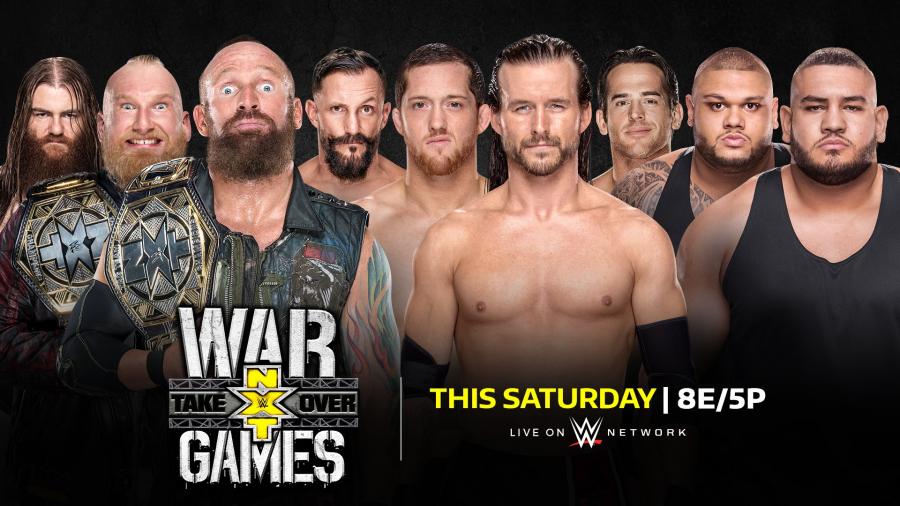 Tomorrow, NXT will kick off the Survivor Series weekend with a bang with NXT Takeover War Games. NXT has always set the benchmark for the weekend prior to any WWE pay-per-views. Here are my overall thoughts for NXT Take Over War Games card as well as my predictions.

Lars Sullivan has made a name for himself as he has destroyed his overall competition. Then surprisingly Ohno decided to challenge him to a match at NXT Takeover. Sullivan has defeated No Way Jose, Oney Lorcan, and Danny Burch to name a few. This will be Sullivan toughest test to date in NXT it will be a hard-hitting contest. However, Ohno will overcome the strength of Sullivan with a Rolling Elbow for the win.

Ever since Velveteen Dream debuted in NXT he has turned heads for different reasons. Dream called out Black for a match at NXT Takeover War Games. He has got under the skin of Black by giving him an ambush attack. However, come this Saturday Black will get the revenge on Dream once and for all with his devastating kicks once he hits the Black Mass it will be over.

The NXT Women’s division is moving in a new direction without Asuka four women will compete to crown a new NXT Women’s Champion TakeOver: War Games. It will be Kairi Sane, Ember Moon Peyton Royce SAnitY’s Nikki Cross will battle in a fatal 4-way match for the vacant title. These four women competed in numerous matches to qualify for spots in this fatal 4-Way match. Kairi Sane earned the right after she won the inaugural Mae Young Classic tournament. Royce and Moon both qualified after they won in triple threat matches, finally Cross earned her opportunity when she won a Battle Royal for the final spot. It is extremely difficult to pick a winner, but Royce will put off the upset with help from her iconic partner Billie Kay.

Drew McIntyre will have his toughest test as he will defend his NXT Championship against Andrade Cien Almas. Almas has always been talented but with his alliance Zelina Vega, he is just on a different level. McIntyre has been extremely focused since he made his return to the WWE and he ended the glorious era at NXT Takeover Brooklyn III. He defeated Bobby Roode to crowned the NXT Champion and he hasn’t looked back. Then, this week on NXT Almas attacked McIntrye to send a message heading into their match. McIntrye will sucessfully defend his Championship against the upcoming talent in Almas.

SAnitY, The Undisputed Era, The Authors of Pain and Roderick Strong

Tomorrow night history will be made as war games will make its long-awaited return after 20 years. Three teams SAnitY will battle The Undisputed Era and The Authors of Pain and Roderick Strong. There will be two steel structures inside two rings to contain the chaos. For those that don’t know the war games match originated in NWA but it became a staple in WCW. The contest features two rings, side-by-side, surrounded by a giant steel cage. Each group selects one member to start the bout inside the cage, while the remaining team members are locked inside shark cages by the entranceway.

After five minutes, the final two members from one team enter the match, giving a faction an advantage based on the numbers game. Three minutes later, the second team’s members are released, followed by the final team’s competitors following another three-minute period. Then once all nine wrestlers are inside the ring, the first competitor to pick up a pinfall or submission earns the victory for their team.

Adam Cole, Bobby Fish, and Kyle O’Reilly made their presence known at NXT Take Over Brooklyn III. They put their focus on the NXT Tag Team Champions SAnitY and NXT Champion Drew McIntyre with brutal attacks.The trio sent a message to the NXT roster that they are in NXT to shock the system. However, the actions of the Undisputed Era would not sit well with SAnitY and The Authors of Pain.

SAnitY defended their NXT Tag Team Championship against the Authors of Pain. All of a sudden,  The Undisputed Era came out and interfered in the match. Roderick Strong made a surprising appearance. For weeks, The Undisputed Era had tried to recruit Strong, but Strong had different plans and he attacked The Undisputed Era. It will be very interesting to witness War games makes a return but when all the smoke clears The undisputed Era will reign supreme.