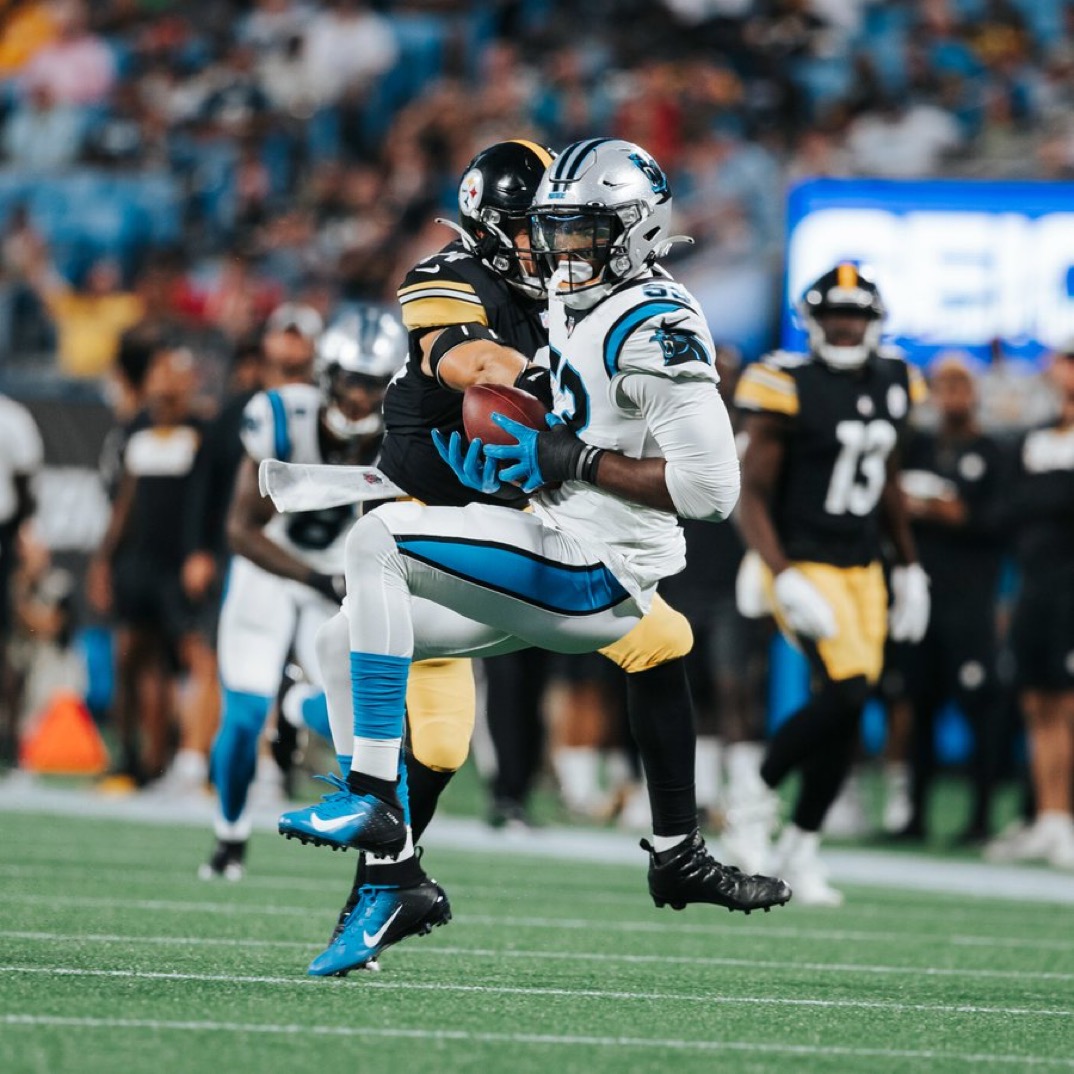 A 17-game regular season shortened the preseason to three games, with the Carolina Panthers closing out with a home game against the Pittsburgh Steelers ahead of Tuesday’s roster cut deadline.  The starters would play much of the first half, but other questions loomed.  It has been no secret that Joey Slye has struggled with consistency and head coach Matt Rhule stated such following last week’s 20-3 loss to the Baltimore Ravens.  The Panthers signed two kickers in the week since, but waived Dominik Eberle.  They traded for Ryan Santoso who stood out in camp for the New York Giants but was not expected to surpass former Panther Graham Gano for the starting job.

Santoso was tested early met the challenge, connecting on a 52-yard field goal that doinked the upright on the way through.  The field goal put the Panthers up 3-0.  Later in the first quarter, defensive end Brian Burns intercepted Dwayne Haskins.  However, Carolina could not capitalize on the turnover as Slye missed a 49-yard field goal; keeping the score at 3-0.  It was the last time Slye saw the field in the first half as Santoso took care of kickoff duties and converted 3-3 extra points.  In fact, Slye’s next action was in the fourth quarter where he converted an extra point and handled the following kick off duties.

The second murky area was QB2.  Neither PJ Walker nor Will Grier have been designated as the backup in the first and only depth chart released by the team.  It was a continuation of last season where Rhule routinely held off from naming a bonafide back up.  Sam Darnold saw his most action to date as a Panther playing the entire first half and finishing 19-of-25 for 162 yards and two touchdowns.  His final rating was 119.1.  The second half started with Walker under center.  He looked pristine in the opening drive of the third quarter as he connected with tight end Tommy Tremble for back to back completions of 20-plus yards.  Spencer Brown capped off the drive with a 20 yard rushing touchdown to give the Panthers a 24-0 lead.  Walker finished 5-of-10 for 83 yards and a passer rating of 78.3.  Grier entered the game to begin the fourth quarter and scrambled for a 24 yard touchdown on his second series to extend the lead to 31-3 after Slye’s extra point.  He finished 5-of-7 for 47 yards and a passer rating of 89.6.

On the other side of the field, the Steelers struggled to find any form of synchronicity and did not crack the scoreboard until 1:43 left in the third quarter when kicker Chris Boswell made a 52 yard field goal.  Pittsburgh only played a handful of their starters, including Chase Claypool who finished with one catch for 18 yards.  Dwayne Haskins and Joshua Dobbs took snaps under center with Haskins finishing 9-of-16 for 108 yards and one touchdown; he threw one interception en route to a 71.9 passer rating.  Dobbs entered the game in the second half and finished 6-of-11 for 35 yards and with a passer rating of 60.8.  Ray-Ray McCloud scored Pittsburgh’s lone touchdown with 1:05 left to play; Boswell missed the extra point.

When the dust settled, Santoso was 3/3 on extra point attempts with successful field goals of 52 and 29 yards.  Slye had one missed field goal and one successful extra point.  With the 34-9 win, the Panthers finish the preseason 1-2.  Carolina will welcome the New York Jets to open the regular season on September 12.