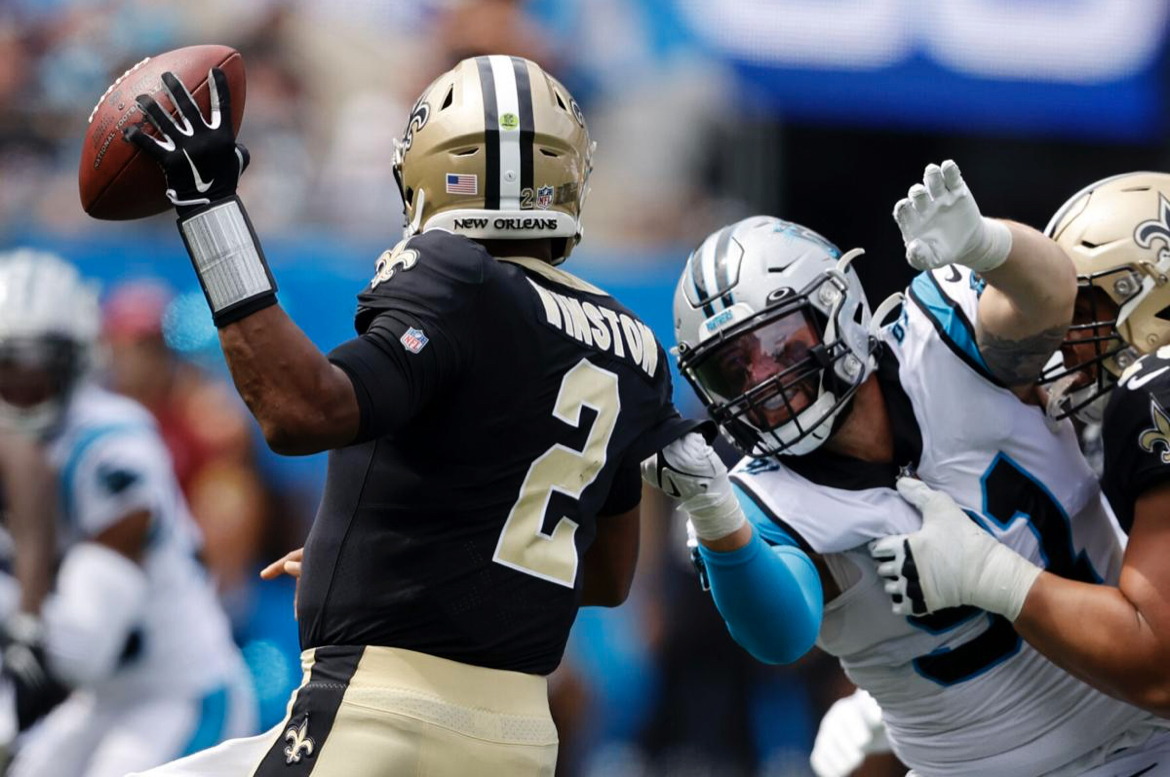 On paper, the Panthers-Saints matchup doesn’t look like much of a rivalry.  New Orleans has gotten the best of Carolina winning eight of their last nine meetings.  However, times they are a changing.  For the first time since 2006, Drew Brees is not the starting quarterback and wide receiver Michael Thomas is set to miss the first five games of the season on the Physically Unable to Perform, or PUP list.  On the Panthers sideline; they boast the youngest team in the NFL so the bitter taste of losses past are not present on the palates of a young, precocious team ready to establish their identity in the NFC South.  Only a handful of players were around for the infamous “broom incident” where some “anonymously” sent then-Panthers quarterback Cam Newton a broom and a bottle of wine to rub salt in the wounds of a 3-game sweep in 2017 that ended the Panthers season.  While new starter Jameis Winston has spent his entire 7-year career in the division, it is his first time really at the helms of a Sean Payton offense.

A Week Two date is an early test for the Panthers who showed flashes of defensive brilliance in a season opening win over the New York Jets and they seemed up to the task early.  Swiss Army knife Alvin Kamara was held to just 21 total yards and Winston went into halftime with a QBR of 46.0 after being sacked twice and intercepted by safety Juston Burris.  On the offensive side of the ball, Darnold looked to exploit the Saints secondary early with both Marshon Lattimore and Chauncey Gardner-Johnson out for today’s game.  The Panthers capped their opening drive with a 20-yard strike to Brandon Zylstra.  Their third drive of the game ended on the Saints’ 2-yard line with the team settling for a short field goal by Zane Gonzalez.  Wide receiver DJ Moore reached the end zone for his first touchdown of the season on the Panthers’ next drive as they took a 17-0 lead into halftime.

Third quarter has been an Achille’s Heel for the Panthers but they opened the half forcing Winston and friends into a 3-and-out possession.  Things were a bit sluggish on the offensive side of the ball as Darnold was sacked leading to a 50-yard field goal attempt.  The attempt was blocked by Carl Granderson, recovered by Zack Baun, and returned to the Panthers’ 38 yard line.  Once again, the stingy Panthers defense forced the Saints to turn the ball back over on downs.  On the following possession, Darnold threw a short, odd looking interception into the hands of defensive lineman Malcolm Roach and he returned it to the Panthers’ 18-yard line.  The Saints finally capitalized and cracked the score board with an early fourth quarter scamper into the end zone by Winston and it would be the only time they put points on the board.  While Carolina’s defense was playing lights out, the offense fought through the second half sludge with Christian McCaffrey scoring his first touchdown of the season and Zane Gonazalez’s second field goal of the day rounding out the scoring.

To put an exclamation point on the win, rookie cornerback Jaycee Horn recorded his first interception when he picked off a deep middle pass as Winston tried to connect with Juwan Johnson.  Winston finished 11-of-22 for 111 yards, one rushing touchdown, and two interceptions for a final rating of 26.9.  He was sacked four times and hit eleven times by a swarming Panther defense.  Kamara was held to 30 total yards on twelve touches.  The Saints were held to 128 total net yards; the lowest total ever since Payton took over as head coach in 2006.  Darnold threw for 305 yards, two touchdowns, and one touchdown with a rating of 99.1.  Moore led the Panthers in receiving with eight catches for 79 yards and a touchdown while McCaffrey added 137 total yards and a rushing touchdown.  The Panthers move to 2-0 and have a quick turnaround before heading to Houston on Thursday to take on the Texans while the Saints drop to 1-1.