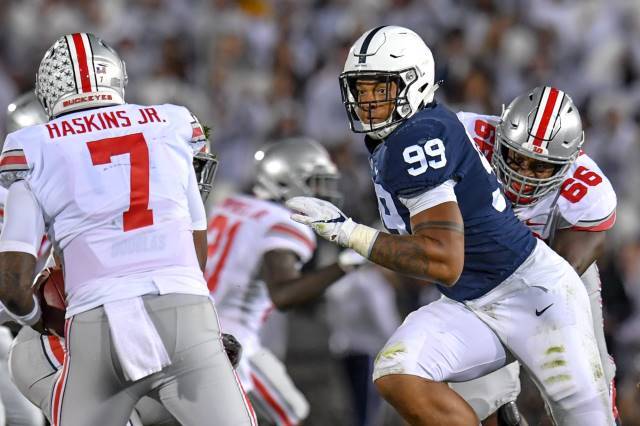 With just about everyone expecting the Carolina Panthers to select a cornerback with their second round pick, Marty Hurney and crew drafted another defensive end.  With the 38th overall pick, the Panthers selected Penn State EDGE Yetur Gross-Matos.

Gross-Matos racked up 19.0 sacks and 37.0 tackles for loss in 38 games en route to back-to-back first-team All-Big Ten honors.  Not a stranger to adversity, Gross-Matos tragically lost his father at the tender age of two due to a boating accident according to the Panthers team website.  Just a few years later, his brother died after being struck by lightning.

First year head coach Matt Rhule is also a former Littany Lion having played linebacker as a walk-on under Joe Paterno.  The ties don’t stop there as Gross-Matos revealed during his introductory Zoom press conference that he had just found out that Rhule had offered him a scholarship as the head coach at Temple.

The Panthers are hoping that Gross-Matos can contribute immediately after the loss of starters Mario Addison and Bruce Irvin to free agency.