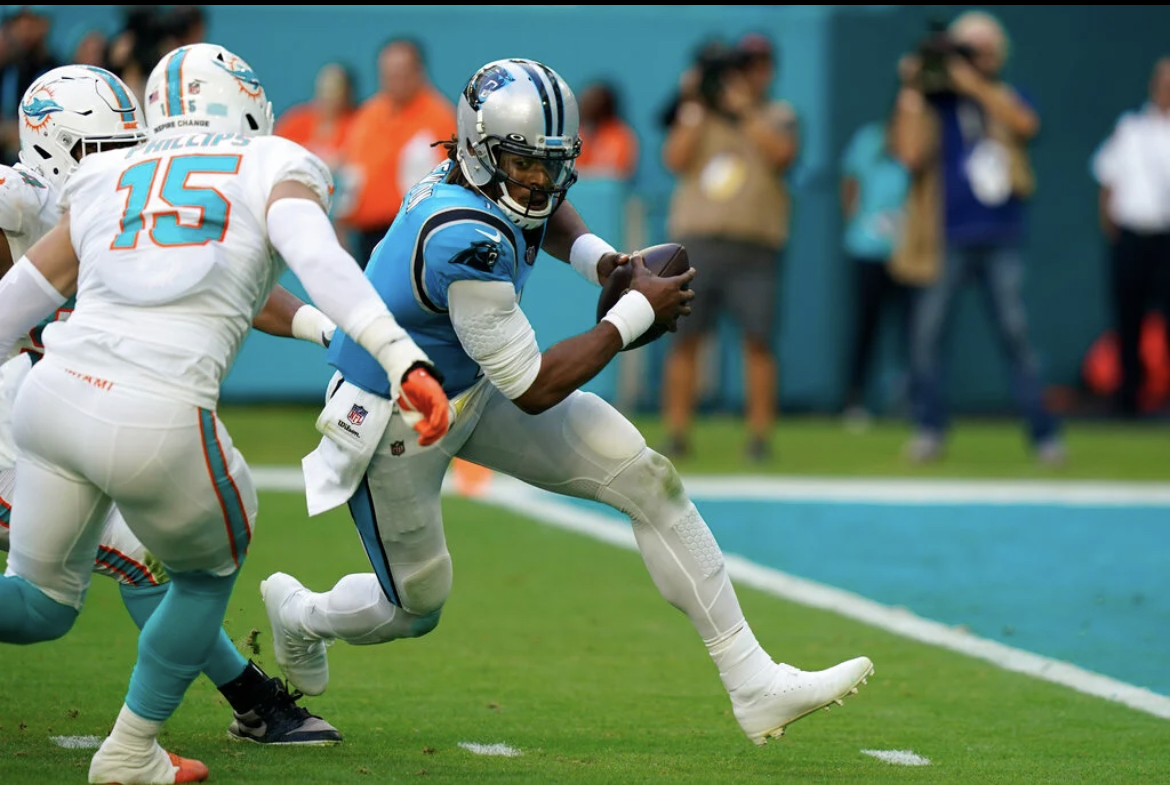 One word describes the Carolina Panthers in Sunday’s game against the Miami Dolphins – putrid. They absolutely stunk it up in all phases of the game. It started with a special teams turnover when Miami linebacker Duke Riley blocked a punt by Lachlan Edwards. Cornerback Justin Coleman recovered the football in the end zone for a touchdown to give the Dolphins a 7-0 lead with 9:11 to play in the first quarter. The Panthers answered with a touchdown of their own on the next possession set up by a 64 yard connection between quarterback Cam Newton and receiver DJ Moore. Newton rushed for a 1-yard touchdown a couple of plays later to tie the game at 7 with 6:01 left in the first quarter. That would be the one and only time Carolina reached the end zone.

The Panthers’ first two possessions to start the second quarter ended with interceptions by Jevon Holland and Xavien Howard. While the Dolphins were unable to capitalize off the first turnover, Howard returned his takeaway to the Carolina 9-yard line to set up a 9-yard touchdown reception by Jaylen Waddle with 9:01 left in the first half. On Miami’s next possession, Panthers safety Juston Burris missed an open field tackle on Waddle, resulting in a 57 yard pick up down to the Panthers 14-yard line before being chased down by Donte Jackson. Running back Myles Gaskin capped the drive with a 3-yard touchdown carry to extend the Miami lead to 21-7 with 4:26 left in the half. After a forgettable first half, Carolina went into the locker room at halftime on an uptick after linebacker Frankie Luvu’s fumble recovery down to the Miami 23-yard line with one second left in the half. A 41 yard field goal by Zane Gonzalez brought the Panthers within 11 as time expired in the first half.

The second half didn’t get much better as Carolina struggled to move the ball and defense struggled to get off the field on third down. In fact, when it was all said and done, the Panthers only managed ten total first downs and defense conceded a 43% conversion rate on the other side of the ball. The frustrations seemed to bubble to the surface as defensive end Haason Reddick was flagged for an uncharacteristic taunting penalty on a crucial third down. The penalty gave the Dolphins 15 yards and an automatic first down in the red zone. Gaskin went on to score his second touchdown of the day with another 3 yard rush to widen the gap even further. The point after attempt was no good and Miami led 27-10 with 4:11 left in the third quarter.

P)J Walker entered the game with 10:58 to play after the Dolphins kicked a 46 yard field goal to increase their lead to 30-10. Walker was immediately sacked for a loss of nine yards. After an 18 yard completion to DJ Moore and a rush by Ameer Abdullah, he was sacked once more and ended the drive with an interception hauled in by Nik Needham. A 33 yard field goal by Jason Sanders capped off the scoring and sent the Panthers into their bye week with a 33-10 drubbing. The loss drops the Panthers to 5-7 on the season, but they are still 2-0 in the NFC South and host the Atlanta Falcons in Week 14. Newton finished a dismal 5-of-21 for 92 yards, two interceptions, one rushing touchdown, and a 5.8 passer rating. DJ Moore led the Panthers receiving core with four catches for 103 yards. Christian McCaffrey had ten carries for 35 yards before tweaking his ankle in the first half. For Miami, Tua Tagovailoa finished 27-of-31 for 230 yards, one touchdown, and a 108.3 passer rating. Waddle led all receivers with 137 yards on nine catches. The Dolphins amassed 315 yards of total offense.