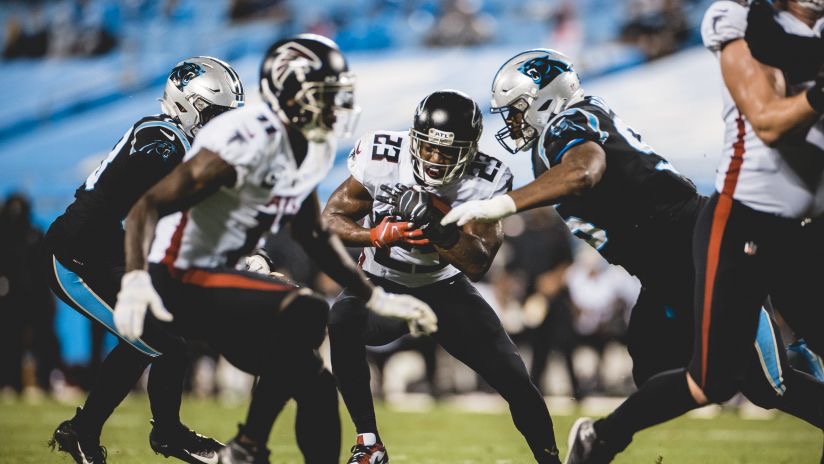 When the Carolina Panthers returned to Bank of America Stadium under the bright lights of Thursday Night Football, they did so with a depleted secondary against one of the top 3 passing teams in the league.  Star Falcons receiver Julio Jones was out for the first meeting between the two teams, which Carolina won in Atlanta.  With cornerback Rasul Douglas still on the Covid/reserve list and Eli Apple released earlier in the week, the Panthers started the game with five corners after activating Natrell Jamerson from the practice squad.

The expectation was for Atlanta’s veteran quarterback Matt Ryan to go at the young corners early and often – and he did not disappoint.  Jones had 85 receiving yards in the first quarter alone.  Calvin Ridley added to the aerial attack before leaving the game with an ankle injury.  To add insult to injury, no pun intended; Carolina’s best cover corner Donte Jackson left the game early in the third quarter after intercepting Ryan to set up the Panthers second and final touchdown of the game in the second quarter.  While Curtis Samuel scored two touchdowns – one rushing and one receiving – it was not enough as the Panthers only made it to the red zone once the entire game.  Samuel’s second touchdown came on a flea-flicker for 29 yards.

The stat line that everyone was watching coming into this game was third down efficiency.  No team was particularly good in this area with the Falcons only converting at 33% and Carolina even worse at 20%.  The Panthers looked to get a spark in the third quarter when Defensive Rookie of the Month Jeremy Chinn took a fake punt 28 yards to convert on 4th-and-9.  However, a few plays later, Panthers quarterback Teddy Bridgewater took a nasty hit, which resulted in the disqualification of Charles Harris.  Bridgewater had to leave the game for a couple series while backup PJ Walker took over.  With Bridgewater out, the Panthers settled for a field goal and those would be the only points scored by the Joe Brady-helmed offense in 42 minutes of play.

A factor not strongly considered was the pocket mobility of Matt Ryan who extended drives several times during the game and even rushed for a 13-yard touchdown.  The Falcons scored 13 unanswered points en route to the 25-17 win.  Jones ended up with seven catches for 137 yards while Ryan threw for 281 yards, one interception, and no touchdowns.  Bridgewater returned later in the game and threw an interception on the potential game-tying drive to end the game.  Bridgewater finished 15-of-23 for 176 yards, one touchdown, and one interception.  DJ Moore led the Panthers receivers with 55 yards and Mike Davis rushed for 66 yards on 13 carries.

The loss drops the Panthers to 3-5 while the Falcons improve to 2-6.  The Panthers will travel to Kansas City to face the defending Super Bowl champion Chiefs in Week 9.