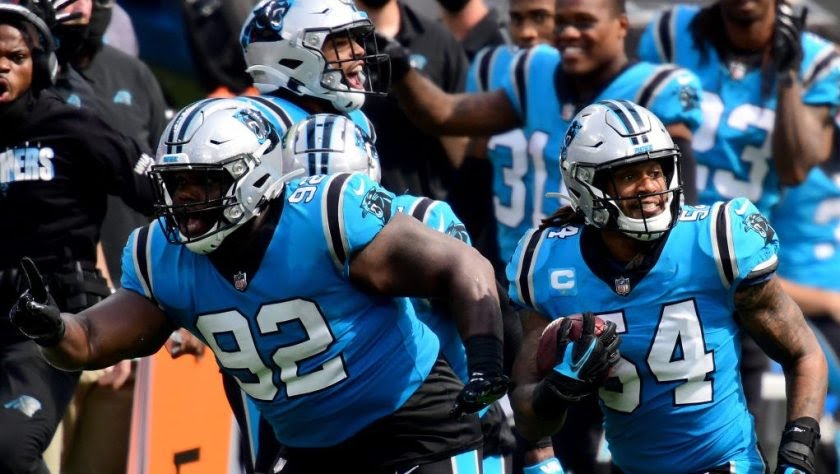 Going into Sunday’s game against the Los Angeles Chargers, the Carolina Panthers were the only team in the NFL not to record a sack.  The quarterback pressure as a whole had been nonexistent contributing to the Panthers losing streak that dated back to week nine of last season.  Brian Burns and Marquis Haynes both got to Chargers quarterback Justin Herbert for sacks; with Burns registering a strip sack.

Burns later forced another fumble. Linebacker Shaq Thompson forced and recovered another fumble while Marquis Haynes also got in on the sack party. The Panthers kept the momentum going when cornerback Donte Jackson halted a Chargers drive by intercepting Herbert late in the second quarter. Three Chargers turnovers translated into 12 points for the Panthers who settled for field goals more often than they would have liked to.

“We just have to spend more time in practice down there (in the red zone) and that’s what it is. We have to have that mindset that everything happens faster, whether it’s running routes, me making decisions, being able to run the ball down there also. We just have to put more of an emphasis on it,” said quarterback Teddy Bridgewater.

After last week’s struggles at Tampa Bay, the Panthers looked like a better team in all phases of the game despite the absence of All-Everything Christian McCaffrey who has been sidelined with a high ankle sprain. The increased defensive intensity resulted in 2 sacks, 7 quarterback hits, 6 TFL, 1 INT, 2 forced fumbles, and 3 fumble recoveries.

Bridgewater did a much better job of taking care of the football, finishing with 235 yards on 22-for-28 passing, one touchdown, and no interceptions. However, the Panthers red zone struggles allowed the Chargers to stay in the game despite their four total turnovers and 60 penalty yards. Forced to put with under two minutes remaining, Panthers long snapper JJ Jansen made the ultimate hustle play on special teams. After snapping the ball, Jansen was the first player down the field and downed the ball inside the 1-yard line, presenting Herbert and the Chargers with a daunting task. With time running out, the Chargers needed to get 99 yards down the field with no timeouts – and they almost did with the help of Yetur Gross-Matos. The rookie defensive end was hit with a roughing the passer penalty that put the Chargers into Carolina territory. The game was finally sealed by a Keenan Allen fumble caused by Panthers defensive end Stephen Weatherly and recovered by Efe Obada.

The win breaks the Panthers 10-game losing streak that dated back to last season and was the longest active losing streak in the NFL. Matt Rhule got his first win as an NFL head coach. The Panthers will now shift their focus to prepare for Kyler Murray and the Arizona Cardinals.