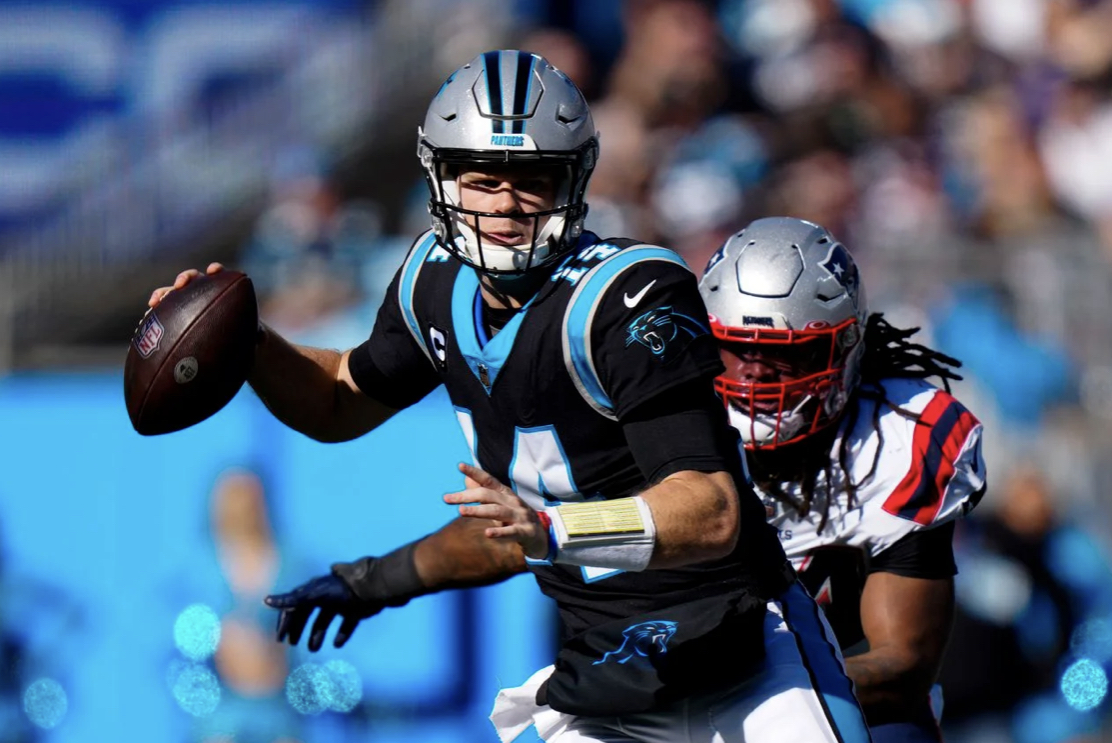 Sam Darnold cleared concussion protocol and was named the starter hours ahead of the Carolina Panthers’ Week Nine matchup against the New England Patriots. That was music to Pats fans’ ears; after all, Darnold hasn’t been the most successful when facing the 6-time Super Bowl champs. Carolina’s signal caller had yet another rough day at the office, throwing 3 interceptions, two of those in the red zone. It was a forgettable day for the Panthers offense as a whole, despite the return of All-Pro running back Christian McCaffrey.

After the first half, Patriots running back Rhamondre Stevenson had amassed more total yards than Carolina’s entire team who could only muster 65 total net yards. Gift-wrapped excellent field position after Brian Burns and Stephon Gilmore caused two first-half turnovers, the offense stalled and only came away with 6 points on two field goals. A 3-yard touchdown run by Damien Harris and a 7-yard touchdown reception by Hunter Henry game the Patriots a 14-6 lead going into halftime.

Carolina went 3-and-out for their first series after the break but finally started to move the ball courtesy of a big 33 yard gain by running back Chuba Hubbard. Darnold then threw his first interception of the game to J.C. Jackson at the New England 12 yard line. Jackson then went 88 yards for the touchdown to extend the Patriots’ lead to 21-6 with 6:55 left in the third quarter. Darnold then proceeded to throw interceptions on the Panthers’ next two possessions – one to linebacker Jamie Collins and another to Jackson. The third interception occurred in the end zone after the Panthers got as close as the New England 14-yard line after two chunk plays by McCaffrey of 19 and 21 yards. The Patriots rounded out the scoring with a 37-yard field goal by Nick Folk.

Zane Gonzales continues to be the bright spot for the Panthers, scoring the team’s only points on field goals of 39 and 49 yards. Darnold finished 16-of-33 for 172 yards, three interceptions, and no touchdowns while registering a rating of 26.3. Rookie Mac Jones finished 12-of-18 for 139 yards, one touchdown, one interception, and a rating of 85.2. Stevenson created headaches for the Panthers defense all afternoon and racked up 106 scrimmage yards on 12 touches. In his first action since Week 3, McCaffrey picked up 106 yards on 18 touches.

With the loss, the Panthers drop to 4-5 and will head to Phoenix to take on the Arizona Cardinals next week. The Patriots improve to 5-4 and will face the Cleveland Browns next week.