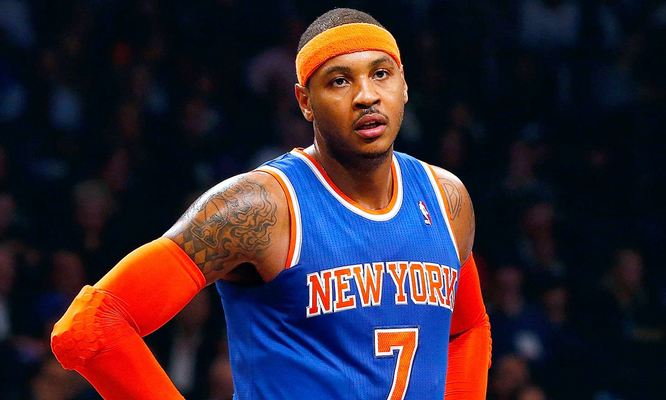 Carmelo Anthony has made it clear he wants to remain a part of the New York Knicks. With the self-proclaimed “super team” slumping, changes are evident. With a record of 19-26 (11th in Eastern Conf.), the Knicks don’t even look like a playoff team currently. They have nothing but older veterans on bad contracts and not much young talent to write home about. Meanwhile, Carmelo has a No Trade Clause in his contract which means he cannot be traded unless he accepts the move. There are plenty of teams that would want to trade for him but where are some destinations he would approve?

The Los Angeles Clippers is the ideal spot for a player like Carmelo Anthony. The Clippers already have an All-Star caliber point guard in Chris Paul; who is friends with Carmelo. Also, the Clippers have one of the best coaches in the NBA in Doc Rivers. With Blake Griffin under-performing, the fans could be ready for something new. Using the NBA Trade Machine, the Clippers could trade Blake to the Knicks for Carmelo Anthony. Because of this trade, it would bring an excitement back to Madison Square Garden that they haven’t felt since first acquiring Carmelo in 2010. On the other hand, the Clippers would be in better win-now position adding the future Hall of Famer. Melo would give them a consistent scoring threat to take the pressure off Chris Paul. Also, this move would open the paint up for Deandre Jordan to roam and wreak havoc on defense and on the rebounds.

Boston making this move could be a real intriguing one. The Celtics have already acquired a major championship piece this offseason in Al Horford. And adding Carmelo Anthony could be the final piece to make the Celtics a legit contender to the Cavaliers in the East. Using the NBA Trade Machine, the Knicks could send Carmelo to the Celtics for Avery Bradley, Jae Crowder, and a few other pieces. This trade would form a worrisome “Big 3” in Boston with Isaiah Thomas, Al Horford, and Carmelo. Also, this would add some key impact players to a lacking Knicks roster. A move as big as this could vault the Celtics to 2nd in the East only to the Cleveland Cavaliers and would make the playoffs even more interesting.

I’m sure any people wonder what would the defending champions need with Carmelo Anthony. Well, Kevin Love has always been the outcast on the Cavaliers and many pundits believe his time there is up. This kind of move would refuel the Cavaliers with championship aspirations and bring in a hungry Melo, who is yet to reach an NBA Finals. Using the NBA Trade machine, The Cavs can do a straight swap by trading Kevin Love for Carmelo Anthony. The cause of this, the Cavaliers would be feared by most pairing such a talent with LeBron James and Kyrie Irving. They would bring a renewed fear to the teams along with the Warriors. On the other hand, the Knicks would bring in a proven player and they can move Kristaps Porzingis to center where he belongs. This move would give the New York Knicks the best shooting front court in the NBA to pair with Derrick Rose. To me, this is the riskiest trade of the three but has the highest ceiling of impact.

According to reports, the Celtics, Cavaliers, and Clippers are the only moves Carmelo Anthony would approve of; I’m here to say maybe he should reconsider. The Portland Trail Blazers are one team I see with a lot of potentials. They already have to star guards in Damian Lillard and CJ McCollum who could use a star forward. He would add the impact and veteran leadership they’re desperately missing. Also, the Los Angeles Lakers are a team he could move to. The Lakers have a lot of young talent to trade and reports are that Chris Paul would be interested in signing there in the offseason. Another team of desire could be the Memphis Grizzlies. For years the Grizzlies have been on the cusp of a championship quality team and are just missing one key player. They signed Chandler Parsons to be their scoring forward but injuries have hurt his impact. Carmelo could be that player that jumps this team from hopeful to true contender in one fell swoop.