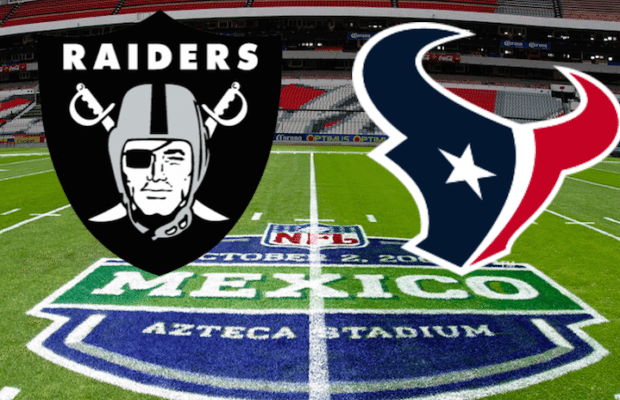 In a highly-anticipated Mexico City showdown, the Oakland Raiders defeated the Houston Texans 27-20. Outmanned, Outsmarted and Outplayed were an understatement in regards to the 8-2 Raiders, yet they managed to steal their fourth consecutive win.

Texans wide receiver DeAndre Hopkins could have been a premonition for a Houston loss, after a huge first quarter reception was called out, preventing a touchdown. The sideline would haunt the Texans throughout, as the calls just seemed to go the Raiders way. Since the “Tuck Rule” play in the 2001 AFC Divisional Round against the New England Patriots, Raiders fans have long cried about the NFL’s mutiny against the Silver and Black. But last night may have showed a sign of change to come, as Oakland got plenty of questionable calls in their favor.

Houston dominated in every sense of the word for three quarters, led by quarterback Brock Osweiler. Osweiler threw for just 99 yards last week against the Jacksonville Jaguars, yet exploited the Raiders D for 243 yards and a touchdown on 26-39 passes. Texans running back Lamar Miller accounted for 104 yards and a touchdown on the ground. Tight end C.J. Fiedorowicz and Hopkins combined for 140 yards receiving, giving the Raiders subpar secondary fits all night. On defense, Jadeveon Clowney and linebacker Benardrick Mckinney contained Oakland’s run game, holding to just 30 yards.

But once again, MVP-Candidate Derek Carr led his team to a comeback victory, throwing two key touchdowns in the fourth quarter. Through much of the first half, Carr looked defeated against the stifling  Texans secondary. In the third, he threw an errant interception, feeling the heat of interior pressure. Yet and still, Carr finished with 295 yards and 3 touchdowns on 21-31 passes. Carr connected with the backfield through the air, accounting for 199 yards. Pro Bowl receiver Amari Cooper chipped in 57 yards and one touchdown. But it was backs Jamize Olawale, Jalen Richard and Murray who did the dirty work.

Linebackers Bruce Irvin and Khalil Mack came up big for the Raiders, combining for 18 tackles and a sack. It was Mack whose controversial 4th-down tackle proved to be game-saving late.