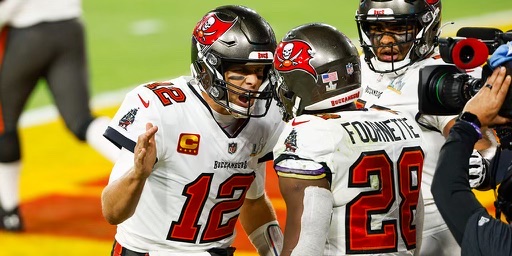 “You can’t bet against Tom Brady.”

That’s been the sentiment all week leading up to Brady’s tenth Super Bowl appearance and the veteran did not disappoint.  Nestled in the familiar confines of Raymond James Stadium, the Tampa Bay Buccaneers brought the city a championship.  Kansas City struck first with a 49 yard field goal by Harrison Butker.  As a matter of fact, Butker was the only Chief to score as he added two more field goals – 34 and 52 yards while Patrick Mahomes and his legion of weapons failed to even sniff the end zone.

To add insult to injury, the Chiefs defense found itself in a perpetual state of self-sabotage racking up 115 penalty yards as the Bucs broke the record for most first downs by penalty as they extended their drives 6 times due to flags on the Kansas City defense.  Mahomes, the Super Bowl LIV MVP was running for his life; he dropped back more than 40 times and was sacked 3 times while throwing 2 interceptions.  Interestingly enough, Mahomes’ 270 passing yards were more than Tom Brady’s 201 yards but the number that matters the most at the end of the day is the score.

Brady was 21-of-29 with three touchdowns and no interceptions en route to a passer rating of 125.8 and yet another Super Bowl MVP. Rob Gronkowski, reunited with Brady after a year of retirement, caught 6 passes for 67 yards and two touchdowns.  Leonard Fournette handled the ground attack rushing for 89 yards and a touchdown on 16 carries.  Antonio Brown continued his road to redemption reaching the end zone on a 1-yard touchdown reception.

Bruce Arians becomes the oldest head coach to win a Super Bowl at the age of 68 as the Bucs prevented the Chiefs from getting the repeat – especially in their own house.  The win is the Bucs’ second Super Bowl victory in franchise history and Brady’s seventh in ten tries.