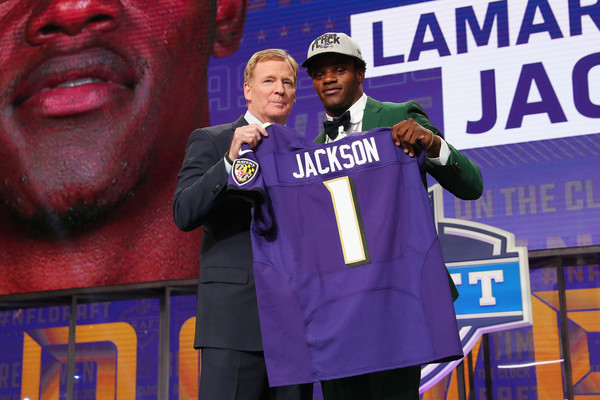 When a parent or grandparent passes away, those left behind can expect a will more often than not. It could be in the form of leftover money or property. Whoever leaves behind a will hopes the remnants of their generosity will be enough to change a family member’s life for years to come.

In Ozzie Newsome’s final draft, he left behind more than enough to change life in the Charm City. Late round steals, defensive backfield help, stud tight end, and ultimately, a potential franchise quarterback. The Baltimore Ravens have some pieces to work with as they continue to rebuild their roster.

Most Ravens fans do not want to admit their team has been rebuilding the ever since their last Super Bowl win. They’ve disguised the rebuilding process by bringing in established veterans like Steve Smith, Eric Weddle and Jeremy Maclin. The franchise has tried to give off the appearance that they have not been retooling their roster for the past five years in an effort to try and maintain butts in the seats. However, last year was evident; fans caught up to their game of charade.

Another season hovering around mediocrity by finishing with a 9-7 record. Another mid-round draft pick. Some Ravens fans had probably already checked out for the upcoming season, hoping better times lie ahead. But in his last ditch effort, Newsome injected excitement into a franchise that had plateaued. And he did it through the draft.

Fourth quarter blunders aside, the defense has held up its end of the bargain for the past couple years. The offense has not only been a problem on the field, but in the ticket sales. Today’s modern NFL features passers averaging 300 yards per game, throwing 30+ touchdowns, with receivers crossing 1,000 yards with regularity. The Ravens offense has been behind.

Fans have grown tired of seeing Joe Flacco drop back, survey the field and settle for a three yard check down every other pass play. Baltimore faithful tune in to see an excellent brand of football that was established by Ray Lewis and Co. since the team’s inception. However, the absence defensive dominance and ground and pound football has been absent, to go along with a team that is not modern-day NFL friendly. The Baltimore Ravens have been in a free fall since 2012.

But, Newsome took the jump and attempted to do something about it in his final draft as the Ravens general manager. The 2018 NFL draft was filled with some highlights, and some low lights. However, the biggest takeaway is that the new injection of youth provides hope for a franchise that has gone stale.

The Ravens need help at wide receiver. That much is obvious. Even with the addition of Michael Crabtree, John Brown and Willie Snead, the Ravens are behind modern NFL teams who have receivers that can not only break the game open, but also get fans to sped their money on gameday.

The most popular mocked pick to the Ravens throughout the offseason had been Alabama wide receiver Calvin Ridley.

They passed on him twice.

The second most popular mocked player to the Ravens was Maryland wide receiver D.J. Moore.

They passed on him.

Whether it was out of fear of past blunders, or conforming to the league wide suspicion of today’s college wideouts, the Ravens clearly were not sold on this year’s receiver class. Baltimore traded back nine spots and eventually settled on South Carolina tight end Hayden Hurst.

On film, Hurst immediately jumps out as a pro ready tight end. He does not drop the ball, he has plenty of speed and he simply looks like a football player. There are red flags concerning his age (he will be 25-years-old to start the season), but he fills a role that has been missing since Dennis Pitta’s hips ultimately did him away.

Joe Flacco (and every quarterback for that matter) loves big bodied tight ends. And for good reason. Tight ends aren’t divas, they can go over the middle, and they are usually reliable hands catchers. That is what Hurst will provide. He is a pro’s pro who does everything extremely well. It takes a Hall of Fame tight end to know one, and in his final draft, Newsome identified a tight end who can come in and anchor the passing game for the next eight to 10 years.

Now onto the most popular pick of the entire Ravens draft. The Baltimore Ravens traded back into the first round and selected Louisville quarterback Lamar Jackson.

There have been multiple hot takes on this selection, but one thing is for certain; Flacco will not be on this team after this season. When general managers identify someone as a franchise quarterback, they except that player to be able to lift the franchise. Owners except the franchise quarterback to mask some of the team’s deficiencies. However, as Flacco’s team deteriorated around him, so did his play.

Flacco has identified himself as the cherry on top. He is not the batter or the egg or flour that helps construct the cupcake. But, he is the whipped cream and cherry on top that makes a team that much sweeter. Flacco is not a main ingredient, he is a sweetener. The 40-40 record since the Super Bowl speaks for itself.

His predecessor, Lamar Jackson, is not a sure-fire bet either. He struggles with accuracy at times and his throwing base is too narrow. However, the Ravens offense has lost it’s juice. And, Jackson, even though he struggles with the same things Flacco does, can impact the game in another way that Flacco simply can’t.

Newsome admitted the Flacco project is simply outdated and it is time for a new spark. Lamar Jackson’s pick to the Ravens was more about Flacco than it was about Jackson. If, Joe had played at least above average, maybe the Ravens would have settled for a Calvin Ridley and another pass catcher in the second round. But, Flacco has failed to get the engine going time and time again. It was time for a change. And whether Lamar Jackson was the right choice or not, Newsome was certain that Jackson was the necessary choice.

The later rounds of the Ravens draft provides a lot of upside, but a lot of risks.

Perhaps the player most worth watching is UCLA wide receiver, Jordan Lasley taken in the fifth round.

The Ravens doubled up on tight ends by selecting Mark Andrews and they drafted a physical wide receiver in New Mexico State’s Jaeel Scott. However, Lasley provides the most game-breaking potential out of any offensive player taken in the franchise’s draft outside of Jackson.

Despite missing three games his senior season, Lasley had seven games where he went over 100 yards. Two of those games he cleared the 200-yard mark.

Lasley is a threat to take the ball the distance any time it’s in his hands. The Ravens had tried their best to avoid players with character issues since the Ray Rice scandal, but Lasley was too good to pass up at that point.

With Crabtree, Snead and Brown only signed as short term solutions, the Ravens will hope that guys like Lasley, Scott and Hurst can help them in their transition to a more modern offense that is spear-headed by Lamar Jackson.

Despite Jackson’s college struggles with accuracy, he will have pass catchers of all kinds to help mask those deficiencies. He has Lasley who can score at any point on the field. He has tight ends Hurst and Mark Andrews who can be security blankets underneath. Ad he has a jump ball specialist in Scott who thrives off of 50-50 balls.

With Ronnie Stanley locked in a left tackle, the Ravens hope Sooners offensive tackle Orlando Brown Jr. can immediately step in and provide just 80% of what his father was able to do in his years in Baltimore.

Much like the team’s previous drafts, the structure of the Ravens will be built on the mid-round selections of Mark Andrews, Jaeel Scott, Jordan Lasley, and Orlando Brown. These players will play key cogs in helping this team get back to it’s ultimate goal of taking in the atmosphere of postseason football.

While Hurst and Jackson are prized first round possessions, it may take a third down conversion from Andrews to keep the team alive. It may take a 50-50 ball from Scott to keep a drive December drive going. It may take Lasley going 70 yards on a slant. It may take a chip block from Brown to keep Flacco or Jackson upright in the pocket to deliver a pass on a crucial third down. Point is, Ravens picked up mid-round picks who will play vital roles down the stretch. And, if their college tape is any indication, they are certainly talented enough to deliver when it matters most.

Final Pick of the Draft

“Are you gonna make me proud?”

However, Sieler’s selection is a key moment in an otherwise historic draft for the Baltimore Ravens. Newsome kicked off the draft with a player who has All-Pro potential at a position he once played, and he bookended it with a man who plays a position that the Ravens franchise was built off of.

Despite being a seventh round pick, Sieler will be expected to come in and provide the exact same protection that previous linemen have given Lewis and recently, C.J. Mosley. And, it has nothing to do with where he was drafted. It has everything to do with what this final pick means for the Ravens franchise. The final chapter of Newsome’s Hall of Fame career.

Lamar Jackson has the luxury of sitting behind Flacco. Hayden Hurst could take a backseat to another high-round draft pick in Maxx Williams. The receivers have three established veterans in front of them. Brown Jr. could sit behind recently re-signed James Hurst if he isn’t ready.

Sieler could perhaps have the most pressure on him out of any rookie heading into 2018. The Ravens like to rotate defensive linemen throughout the game, so Sieler will get his shot. And it’s up to him whether he wants to live up to the lofty expectations of being the great Newsome’s final draft pick ever.

This is the Ravens most important draft of the past decade. It represents a changing of guard, not only at the game’s most important position, but also in the team’s philosophy going forward. Head coach John Harbaugh is touting this as Ozzie Newsome’s best draft ever. But, time will tell just how effective it was.

One thing is for certain, this draft class will help answer a key question hounding the Ravens going forward: is this team over the rebuild stage, and ready to get back to football excellence?