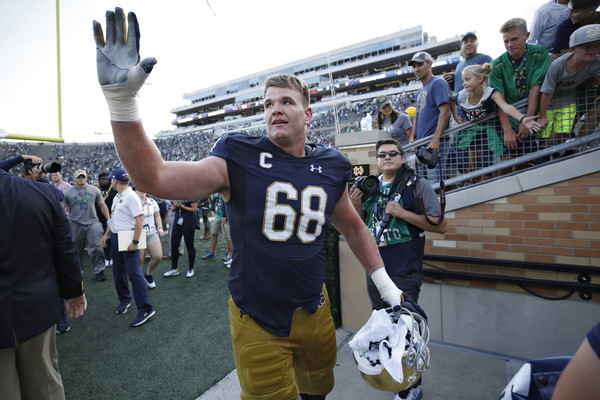 The San Francisco 49ers are headed into year two of the John Lynch and Kyle Shanahan regime. With Jimmy Garoppolo accelerating the rebuild, they now have to opportunity to build around him in the fashion that Shanahan wants.

Last year was seen as mostly a success. Solomon Thomas, the number three overall pick, looks like he might need more time to develop and really solidify himself at a position, but he was promising. Reuben Foster, the number 31 overall pick, was considered one of the best rookie defenders in the league, but offseason legal trouble has put his spot on the team in limbo for now.

The rest of the class was great, particularly in the middle rounds. George Kittle was second among all rookie tight ends in receiveing yards, and Trent Taylor earned the name “Third and Trent,” in the time Garoppolo was under center. As for the defense, Ahkello Witherspoon looks like he could be a stud in the near future, and Adrian Colbert is a starting safety.

Will the 2018 class be as good? Only time will tell, but for all you can do it project.

It’s clear what Lynch and Shanahan want to do: build around their $137.5 million quarterback. And you can’t really blame them. I’ll be the first to admit that I don’t know too much about offensive line play. From everything that’s been said, though, McGlinchey was considered one of, if not the best and most pro ready tackle in the class.

Trent Brown clearly didn’t fit the Shanahan system, as evidence of the 49ers trading him to New England, so McGlinchey was the best bet to protect Garoppolo for the present and the future. Joe Staley isn’t going to play forever, so when he eventually retires, McGlinchey will have a few seasons under his belt before he kicks over to the left side to protect the franchise quarterbacks blindside.

So blessed to be a part of the 49ers organization! It’s the beginning of a #NewEra! Thanks to… https://t.co/oaVnp6aR5p

With Staley playing at a high level, and the additions of McGlinchey in the draft and Weston Richburg in free agency, this offensive line could take a big step forward from last season.

This was probably the most surprising pick of their draft. When they traded up with Washington, a collective cry for a corner from the 49ers fan base was yelled out. Josh Jackson from Iowa and Isaiah Oliver from Colorado were both on the board, and were both considered first round corners on talent. So when it came out that Pettis was the pick, it was greeted with mixed feelings.

Pettis was the best returner in college football. He holds the career record for punt return touchdowns, with nine, so he can be an electric returner from day one. As for his receiving ability, he is more than just a slot receiver. He has good contested catch and deep threat ability, and Kyle Shanahan will enjoy using his underneath.

He will be a solid addition to a receiving crops that is talented, but will likely need help with Pierre Garçon coming off an injury and not getting any younger.

Since Reuben Foster’s arrest, and even for the most of the offseason before that, a linebacker was mocked to the 49ers. The need was there, and Tremaine Edmunds was still on the board, so it was kind of a surprise when he wasn’t the 49ers selection.

However, Warner was a good consolation prize. He’s a good athlete with good size for the position, and he will be good in coverage. He isn’t Tremaine Edmunds or Roquan Smith, but he could be a starter pretty early on in the season.

An athletic safety seems to be the type of player John Lynch likes. At 6’2″, 190 pounds, he ran a 4.32 40-yard dash at his pro day. Moore has the athletic ability and ideal size to move to corner in Robert Saleh’s system. With Jaquiski Tartt, Adrian Colbert and Jimmie Ward at safety, he will likely have to make that move to corner.

Flashbacks to the Trent Baalke era with this pick. Street tore his ACL in April, and most on Twitter were quick to point out that this is exactly what Trent Baalke did. However, before his injury, he probably would have gone in the fourth round. Many liked him, pointed out in this Niners Nation article.

Another strong return man, Reed is a smaller corner, and he will play inside. On his introductory conference call, he made quite the first impression.

“I’m a lockdown corner first and foremost. I don’t get scored on. And I get interceptions.”

It’s safe to say he is confident, and he will fit into the culture of that secondary with ease.

Harris, another injured player, missed all of the 2017 season with a torn achilles. He doesn’t have much of a chance to play with the safety rotation the 49ers currently have, but since he was hurt, that gives him the opportunity to heal.

Taylor missed time with a torn ACL in college, so he got limited time as a starter. It will be tough for him to get playing time on a defensive line that has gotten so many assets put into it.

James was extremely productive at Middle Tennessee. He eclipsed 1,000 yards in his first two years and in his sophomore year, he put up 1,625 and 12 touchdowns. His junior years was injury riddles, suffering ankle injuries and breaking his collarbone. With the addition of Pettis in the second round, this wide receiver corps will be tough to crack.

Overall, this was a solid draft, especially in the first three rounds. While we might not see the same impact from the last round picks as last year, the top of this draft was about building around the future of this team, Garoppolo. They could have gone out and got an true pass rusher, but for what the immediate future of this team is, they did well.