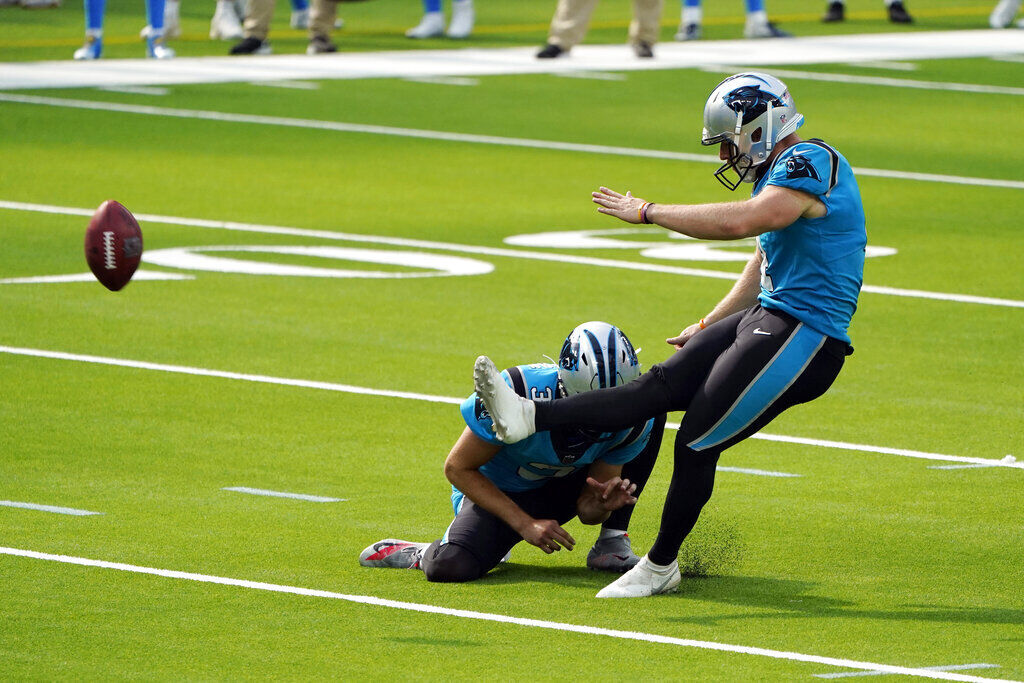 It had been 329 days since the Carolina Panthers won a game.  However, less than 24 hours after their road win over the Los Angeles Chargers, the Panthers are looking at the game film with a critical eye.

Speaking with media early Monday afternoon, head coach Matt Rhule says “missed opportunities” and the inability to establish a run game led to the team’s red zone woes.  Sure kicker Joey Slye got to show off his accuracy – he made all five of his field goal attempts – but simple math illustrates that 6 or 7 points is more than 3.  Rhule said that they knew coming in that it would be difficult to get the run game going due to the combination of Christian McCaffrey’s absence and the Chargers’ staunch defensive line.

“This is a good defense.  This is a great defensive line the we knew we were coming in against.  They made it hard to run the ball but we did have some key runs at key times.”

Veteran Mike Davis started in place of the injured McCaffrey and led the team in rushing with 46 yards on 13 carries and scored the team’s lone touchdown.  Reggie Bonnafon, recently activated from the team’s practice squad, was able to break a 13-yard run at a crucial time late in the game.  As far as ball movement, the Panthers had no problem getting the ball into Chargers territory; they just couldn’t hit pay dirt once inside the red zone.  This has been a problem area for the Panthers long before Sunday’s game.  More than half of last season’s 11 losses were by eight points or less and Carolina often had the ball with very realistic opportunities to win or force overtime.  Additionally, during the seven-game skid of the 2018 season, 5 games were decided by one possession with the Panthers in control of the ball and their own destiny.

There’s a new offensive coordinator and a new quarterback with new weapons; but the same issue remains.  The Panthers were a paltry 17% in the red zone, settling for five field goals in six trips.  Quarterback Teddy Bridgewater says the team simply needs more practice in red zone situations.  “We have to have the mindset that everything happens faster, whether it’s running routes, me making decisions, being able to run the ball down there also,” said Bridgewater.

With McCaffrey out, wide receiver Curtis Samuel also shouldered some of the run game responsibilities.  Coming out of Ohio State, Samuel came into the NFL boasting a very similar skillset to McCaffrey.  Going into his fourth season, Samuel’s abilities have been under-utilized and that’s something first year offensive coordinator Joe Brady wants to change.  “Good things happen when the ball is in his hands,” says Brady.  If the Panthers hope to continue on the winning path, getting into the end zone is crucial.