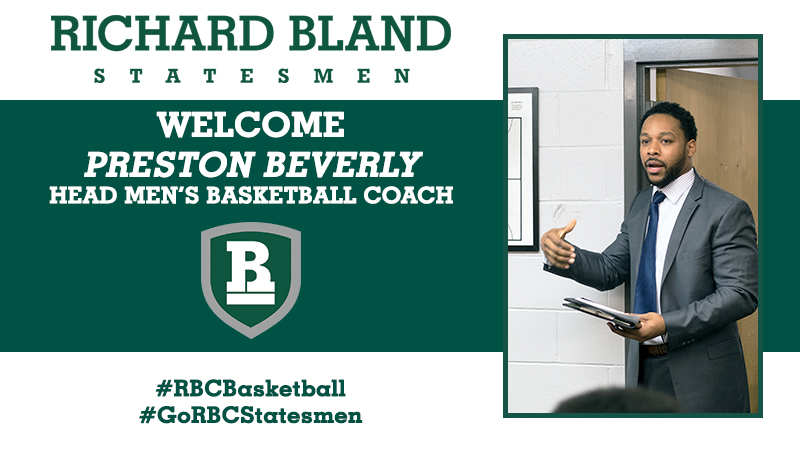 SOUTH PRINCE GEORGE, Va. — Richard Bland College of William & Mary has named Preston Beverly as its next Head Men’s Basketball Coach. Beverly has been an assistant athletics director and assistant coach with the Statesmen for the past three seasons, and will succeed former head coach Chuck Moore, who recently announced his resignation. Beverly previously served as athletics director and head coach at Lincoln College of New England (2012-15) in Southington, Connecticut.

“I would like to thank President Sydow for the opportunity to build on and continue the success of Richard Bland College’s Athletics Program,” said Beverly. “RBC’s academic reputation attracted me here as an assistant, and to now have a chance to lead a team at a school with this kind of academic footprint is a dream. In addition, with the College moving to NJCAA Division I, I look forward to many new opportunities.”

Beverly has helped Richard Bland to a three-year overall record of 67-34, including back-to-back appearances in the 2018 and 2017 NJCAA Division II Men’s Basketball Championships. This year’s team finished 22-11 and was runners-up at the Region 10 Tournament, while last year’s squad was 30-6 as the Region 10 Tournament Champions and advancing to the NJCAA Division II Final Four. He was appointed to a minimum three-year term on The Minority Opportunities Athletic Association (MOAA) Board of Directors last February. MOAA promotes equitable employment opportunities for minorities in the athletics industry and the avocation of an increase in employment for minorities in athletics administration positions at all levels of the sports industry. Beverly is the only appointee from a two-year college.

Beverly built a program at LCNE that averaged 20 wins per season and established a school record for season wins (23 in 2014), including a record 13-game winning streak. He compiled an overall .727 winning percentage (.841 in conference), and his team earned the school’s first-ever national ranking in 2014, posting victories over nationally-ranked NJCAA Division II Sullivan County Community College and nationally-ranked Division III Dean College, respectively. Beverly led Lincoln to its first-ever NJCAA National Tournament appearance in 2014 and was named the District 8 Coach of the Year.

LCNE captured both the Region XXI regular season and tournament championships in 2014, both firsts in school history. Beverly coached an NJCAA All-America and an NJCAA National All-Star, and five of his student-athletes earned All-Region honors, four were named Regional All-Stars and one was named to the NJCAA National All-Tournament Team. Five of his former student-athletes earned athletic scholarships from four-year institutions at the NCAA Division I, Division III and NAIA levels.

With a concerted focus on academics, Beverly developed a student-athlete study hall at LCNE that improved retention and resulted in six student-athletes earning a 3.5 GPA or higher in its first year of implementation. Known as a tireless recruiter with a keen eye for recognizing and evaluating talent, he established a national recruiting base that yielded student-athletes from Florida, Ohio, Tennessee, New Jersey, New York and Connecticut.

As Director of Athletics at LCNE, Beverly’s tenure lauded many accomplishments, most notably being a partnership with the Bristol Boy’s and Girl’s Club that resulted in a practice and game facility for LCNE programs. He developed corporate sponsorships, community relations initiatives such as Bread for Life and organized the college’s first-ever Athletics Banquet among many endeavors that increased the image and awareness of the institution.

Beverly has six additional years of assistant coaching experience at Nyack (N.Y.) College, Bowdoin (Maine) College and SUNY New Paltz. He helped Bowdoin to a school-record 22 wins in 2007-08, including the school’s first-ever appearances in the New England Small College Athletic Conference (NESCAC) Tournament Championship game and in the NCAA Division III National Championships, where the Polar Bears defeated Curry College in the first round.

Beverly graduated from Virginia Military Institute in 2006 with a degree in Computer Science and a minor in Psychology and Math, reaching the ranks of S-6 Lieutenant. He was a four-year team member and two-year team captain at VMI, where the 6-6, 225-pound forward ranked among the Big South Conference’s top defensive players and rebounders. Beverly enjoyed his finest season with the Keydets in 2004-05, averaging 5.4 points and 5.1 rebounds, and he shot a career-best .510 from the field in 2002-03.

Beverly joined the Hudson Valley (N.Y.) Hawks in 2007 for their inaugural season in the now-defunct National Professional Basketball League (NPBL). He led Hudson Valley to the NPBL Championship as the team’s leading rebounder and second-leading scorer.

Beverly’s father, Randy, was a defensive back for the NFL’s New York Jets (1967-69) and Boston Patriots (1970-71). Randy secured three critical interceptions to help the Jets capture the Super Bowl III Championship in 1968 with a 16-7 upset over the favored Baltimore Colts. His mother, Sharon, was a college basketball standout at Queens (N.Y.) College and later played professionally in Europe and with the New Jersey Gems of the Women’s Professional Basketball League (WPBL). She is a prominent athletics administrator, having served as Assistant Vice President for Student Affairs/Executive Director of Athletics & Recreation at The College of New Jersey (2014-16), following a successful tenure as Director of Athletics & Physical Education at Vassar College (2002-13). Sharon is currently President and CEO at Beverly & Associates (B&A), providing experienced professionals capable of assisting presidents (or their designees), with the identification of new leadership for athletics.

WHAT OTHERS ARE SAYING ABOUT PRESTON BEVERLY
“Preston has been an unbelievable asset to Richard Bland College’s program for the past three years. His influence on and off the court has been invaluable to RBC players and me. I have no doubt that he will continue the success of this program while transitioning to the Division I level. Preston is a loyal individual of high integrity and strong work ethic. He is exactly the type of role model to influence this generation of student-athletes. I look forward to watching him grow as a head coach. We will always be Statesmen Family.”
— Chuck Moore, Director of Athletics and Former Head Men’s Basketball Coach at Richard Bland (2012-18)

“I’m excited for Preston and know that he will do a great job in this position. I have known Preston since his days as an assistant at Bowdoin when I was the coach at Williams. He has always been a hard worker, an avid learner, and a person of high integrity. I can’t wait to watch the program’s continued development under his tutelage.”
— Dave Paulsen, Head Men’s Basketball Coach at George Mason University

“Congratulations to Preston Beverly on being named Head Men’s Basketball Coach at Richard Bland College. Preston is a former VMI basketball player and alum that I have had the opportunity to get to know during my time at The Institute. Coach Beverly has a great personality and is passionate about the game of basketball. I am confident that he will carry on the legacy of continued success that Richard Bland has become known for on the court. More importantly, Preston’s background has prepared him to develop his players into successful young men in the game of life. I wish him all the best going forward.”
— Dan Earl, Head Men’s Basketball Coach at VMI