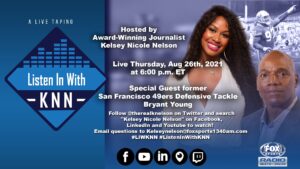 On one of the latest editions of “Listen In With KNN” sports talk radio/podcast show presented by FOX Sports 1340AM/96.9 FM, executive host, and producer Kelsey Nicole Nelson welcomed San Francisco 49ers defensive back and 1995 Super Bowl Champion Bryant Young to the show.

To kick things off, Nelson and Young spoke about trending topics revolving around the NFL, one being the 2021 NFL preseason. With no preseason games since the 2019 NFL season, this season will be a first for players who entered the league in both 2020 and 2021. “It’s something about the game…the younger guys, it’s like ‘oh man, this is way different.’ But I can only imagine that the rookies that didn’t have the fans in the stands last year, they’re going to be so excited…it’s really about the fans…you feed off the energy of the fans,” said Young.

Nelson and Young then spoke about Young’s origins and his time playing college football. Originally from Chicago Heights, Ill. Young attended Notre Dame and was a Fighting Irish defensive tackle from 1990-1993. Bryant was named a team captain in 1993 and reflected on what that honor meant during the conversation, “It’s a huge honor, it comes with a lot of responsibility. When you think about all the people that came before you that led the program, that were voted on by their peers to be a captain, that is a huge honor and something you don’t want to take for granted.”

Throwing it back to Young’s early life, the two spoke about how he viewed the NFL and when he started playing the game in an organized fashion. “When you think about as a kid, watching the NFL and thinking about ‘wow, okay maybe one day’, but not knowing that it can happen…it was a whole lot of work and sacrifice that went into this,” said Young.

Young had not started playing football until high school and noted that it may have been a blessing for him. “I think that was a blessing though, to be honest, because even before then, I learned the toughness before I actually played organized football…[I] was playing tackle football in the open field, with no pads on, just with friends in the neighborhood and they would get pretty competitive,” said Young.

As the seventh pick overall in the 1994 NFL draft, Young would become a member of the 49ers for life. Young spent 14 seasons with the franchise and had an amazing career there. Young is the 49ers career leader in quarterback sacks and is a member of the NFL 1990s All-Decade Team. He’s also a 2-time 1st team All-Pro, 4 time Pro Bowl selection, 1995 Super Bowl Champion, and an 8-time recipient of the Len Eshmont Award given to a courageous and inspirational Niners player amongst many other honors. “San Francisco, it’s a very special place for me. One that I embrace because they first embraced me. They love me and I love them back and I love them hard back. And I wanted to give my heart and soul back to that place through the thick and the thin,” said Young.

Young spoke about how he was taught loyalty and commitment as a young man. Loyal listener Jammel Cutler asked Young if he ever considered signing with other teams and how advanced the talks may have gotten. “I was really committed to starting something and finishing it all the way through and there was a time where I thought I would get traded…but that never happened, and I was just fortunate that I was able to see my career finish with the 49ers,” said Young.

After Young retired from the NFL, he continues to be involved in the game of football. He’s since transitioned into coaching including serving as a graduate assistant for Notre Dame, an assistant coach for San Jose State University, a defensive line coach at the University of Florida, and a defensive line coach for the Atlanta Falcons.  Currently, he coaches for his son’s high school team.

Nelson then asked Young what was next for him. Young spoke about continuing to coach for his son’s team, contributing to charities and giving back, as well as investing in new business ventures, and one day going back to full-time coaching. “… it’s not out of the question to get back into coaching again full time, so I definitely look forward to that one day.” Speaking about giving back, Young was able to help raise $400,000 for the Boys and Girls Club of Tracy alongside his teammates and friends.

Towards the end of their conversation, Nelson and Young talked about the upcoming NFL season and the future of the 49ers. A hot topic within the franchise is the quarterback duel between  NFL veteran quarterback Jimmy Garappolo and the 2021 third overall pick Trey Lance. “A healthy, playing-well Jimmy Garappolo gives Trey Lance an opportunity to grow and develop behind the scenes and that’s the perfect scenario that you want,” said Young.

To learn more about Bryant Young and his football journey, check out the episode below! You can find Young on Instagram and Twitter.