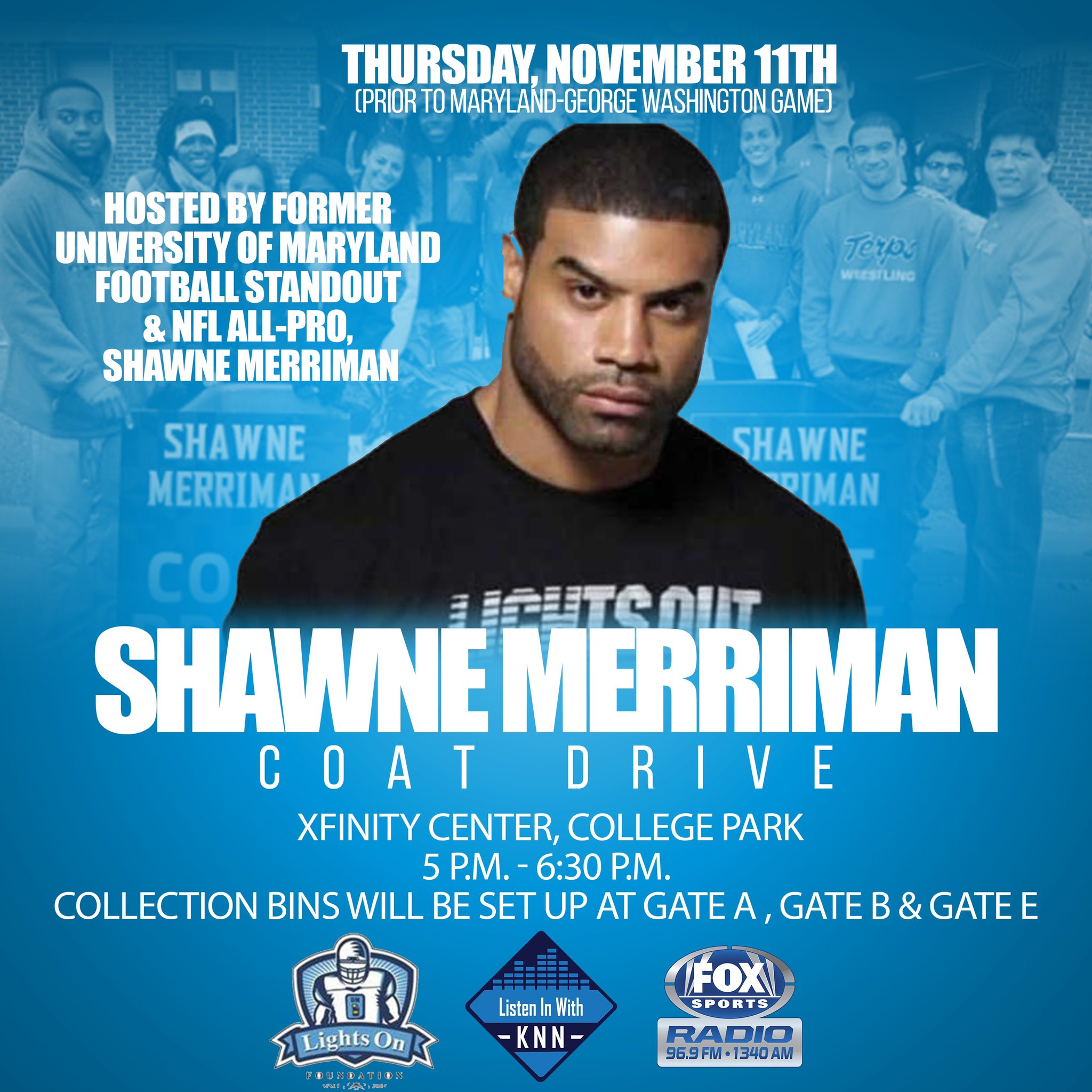 Shawne Merriman, a former University of Maryland football great and NFL All-Pro, is hosting his 19th Annual “Lights On” Foundation Coat Drive this afternoon at the XFINITY Center, in College Park, Md. ahead of the Maryland Terps vs. George Washington University men’s basketball game tonight.

Merriman grew up in Prince George’s County in Maryland and was devastated by fires that left him and his family homeless a few times throughout his childhood. His personal story inspires him to want to give back to others. Winter in the DMV area can get very cold and dangerous for those who are vulnerable to the weather conditions. Giving back to the Maryland area is important to Merriman because “this is my home…I want it going on for another twenty years.”

Merriman aims to help the most vulnerable populations. In an exclusive interview prior to the event, Merriman spoke about how when he was younger he would layer multiple sweatshirts to emulate the feeling of a warm coat.

“For me, I just remember how cold it was and not being able to afford a coat and then wearing two sweatshirts and a long sleeve under because we just couldn’t afford a coat. Looking at it now, and seeing how many people are going to be helped during this time of need, is honestly a great feeling,” said Merriman.

In his sophomore year as a Terp, Merriman would begin this coat initiative to help families have warmth in the colder months. “I said that if I ever had the opportunity and the platform to have something [to help]…kids who feel like how I felt back when I was a kid that I would,” said Merriman.

Merriman reflected back on when he started the coat drive. “…[I thought] that I would only get 100, 200 coats max. We got almost 3,000 coats the first time out,” said Merriman.

At the first event, Merriman was impacted by the great response and felt that others wanted to help him in the initiative. “That’s when I realized that people do want to give. People do want to help other people and realize that this is a real situation being here when it gets cold in the winter,” said Merriman.

Merriman’s nickname “Lights Out” represents his game on the field, but his foundation “Lights On” hopes to bring positivity.

Maryland student-athletes from hockey, field hockey, soccer, basketball, football, and former teammates of Merriman are all volunteers who assist in this drive.

This event is taking place on Veterans Day and a portion of the coats collected will be donated to veteran shelters. Other beneficiaries are children and families affected by the Coronavirus pandemic as well as those who are facing joblessness and homelessness.

You can contribute to this great cause by dropping off your gently used winter coats, hats, and scarves at the XFINITY Center from 5:00 PM-6:30 PM today. There will be bins at Gate A (South Plaza Gate/Main Public Entrance), Gate B (North Plaza Gate), and Gate E (Garage Concourse Gate).