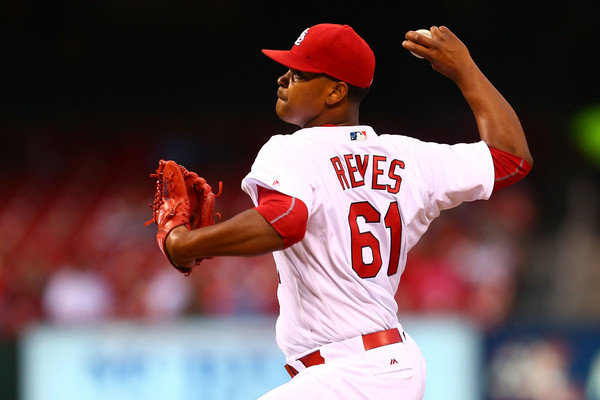 The signing of Holland gives the Cardinals bullpen certainty at the end of games and makes what was already a strong unit an excellent one. Holland allows Bud Norris, Dominic Leone and Tyler Lyons to slide into setup roles that they are better suited for while he locks down the ninth inning with the same ability that made him an All-Star in 2017.

Reyes was at one point the Cardinals top-rated prospect and is expected to one day be the team’s next ace. However Tommy John surgery sidetracked that plan and Reyes was shelved for all of 2017. Now he is making his way back and the Cardinals are obviously taking a cautious approach with their prized pitcher.

Armed with a fastball that can reach triple digits, a devastating 12-6 curveball and a changeup that is at the very least an average third offering, Reyes was thought of as a candidate to be the Cardinals closer or at least play a significant role in the bullpen when he returned.

But with Holland now signed on and ready to become the team’s ninth inning man, Reyes has been moved to the 60-day disabled list and St Louis can now assume a longer timetable so that the young pitcher can attack his rehab as a starter and not a reliever.

Long-term this is better for the Cardinals because Reyes can build his stamina back up, take the time to properly prepare himself as a starter and then come back at the tail end of this season or in 2019 at full strength and ready to make the impact of an ace.

With St. Louis expecting to be in the hunt for a division crown, it is a possibility that the Cardinals will have Reyes return at the end of the season in a bullpen role, to fuel a postseason push. But even in that instance, it allows Reyes to take time and be meticulous with his rehab instead of trying to rush back in May or June.