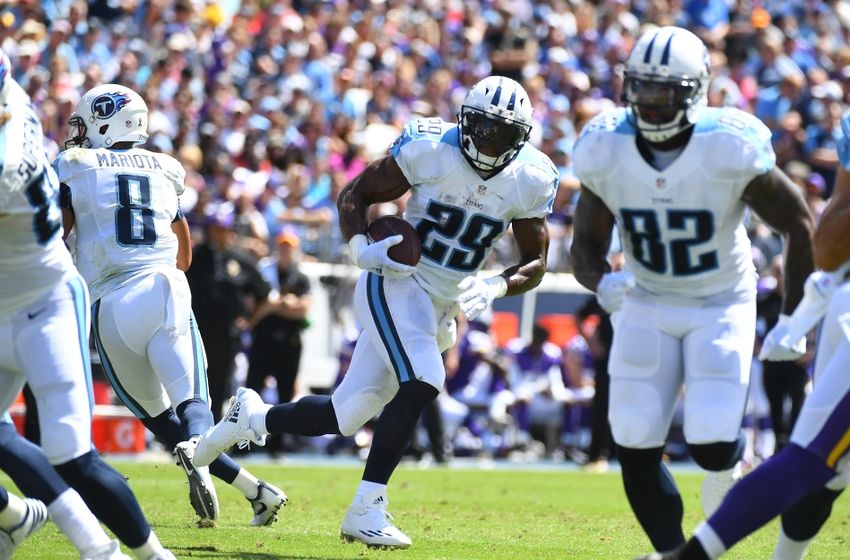 A team that has as much intrigue as it does talent. State Of The Franchise now focuses on a possible playoff team this season, the Tennessee Titans.

Every season, there appears to be a new, up-and-coming team on the verge of surprising the masses. This past season, the Atlanta Falcons went 11-5 and earned the right to be called NFC champion. The season before, the Carolina Panthers went 15-1 and also earned an NFC championship. Season after season, there is a team that rises from obscurity and stumble across success.

For some, the Tennessee Titans may be that team to do so in 2017. Head coach Mike Mularkey guided the young team to a 9-7 season last year behind a power running game, an improving quarterback, and a defense that made plays as the season went along. Now that team comes back intact for the most part along with a few interesting additions. They also possess an ace in the hole which is their upcoming draft, strategically constructed by their solid general manager. The Titans are worth keeping a very close eye on this season. Here is their breakdown in ‘State Of The Franchise’.

Mularkey was a definite surprise hire for the team. A reliable offensive mind is the former Buffalo Bill head coach as he took over the team halfway through the 2015 season. Mularkey will have most of the control of the offense and that’s even with offensive coordinator Terry Robiskie having the title. The two orchestrated an offense that relied heavily on it’s run game and timely passing. Offensive line coach Russ Grimm is one of the best in the game and given his Hall-of-Fame credentials, his teaching ability will rub off. Defensive coordinator Dick LeBeau is a recognizable face among coaches in the league. He has been around the NFL as a player and coach for almost 60 years. There is a reason why he is highly respected.

The Titans have a unique combination of skill on offense. Their run game is powered by running backs DeMarco Murray and Derrick Henry. Murray reached the Pro Bowl for the third time in his career with 1,287 yards and nine touchdowns. He also totaled 53 catches and three touchdowns. Henry ran for 490 yards and five scores in his rookie season. Sprinkle in quarterback Marcus Mariota and his 5.8 yards per carry and the team averaged 136.7 rush yards per game, good for third in the league. Mariota suffered a broken fibula in week 16 but still tossed for 3,426 yards and 26 touchdowns. His health will be key for the season but full recovery is expected.

The success of the team will not be placed on the shoulders of a good offensive line but it should. Tackles Taylor Lewan and Jack Conklin make up an underrated tandem of bookend blockers. The addition of Ben Jones at center in free agency bolsters what was already a really good offensive line to begin with. Tight end Delanie Walker was second on the team in targets (102) but was tied with receiver Rishard Matthews for team lead in catches (65). The team lost former starter Kendall Wright in free agency this offseason but his departure does not cramp the unit enough for what seems to be a progressive step in 2017.

The numbers say otherwise but the presence of LeBeau was a testament to what could have been an ugly season on the defensive side of the ball. The unit was 20th overall in total defense however they were second in run defense. Allowing only 88.3 run yards per game is very impressive, regardless the defense. During their last seven games, the unit forced 11 turnovers after forcing only seven all season up to that point. A good reason why the team went 5-2 during that stretch.

Linebacker Brian Orakpo led the team in sacks with 10 and made the Pro Bowl as a result. He was joined by defensive tackle Jurrell Casey (31 tackles, five sacks) who for some odd reason goes unnoticed every season despite his standout play. The team added to the secondary in the offseason in cornerback Logan Ryan and safety Jonathan Cyprien. What was already a stellar run defense got even better by bringing Cyprien aboard. Linebacker Derrick Morgan has been teetering on taking that next step as a pass rusher. If there was ever a time for Morgan to elevate his game, now would be great. He is fresh off a career-high in sacks by totaling nine in 2016.

There is something about this team. Bringing in a talent such as Murray prior to last season changed things. Adding a former Heisman Trophy winner in Henry changed things also. The hopes are placed in the hands of Mariota as their franchise quarterback. If he makes the expected recovery, Mariota may experience another gradual step as a quarterback which may be enough to put the Titans over the hump and into the playoffs.

The team still has a few kinks to work out. Finding consistency on defense is one. Having a difference maker at wide receiver can help immensely as well. Not to mention that this team is skilled but there is very little playoff experience on the roster. So for this team to elevate, their mentality must as well. GM Jon Robinson (no relation) has impressively built a roster that is only getting better by the week. If the Titans can avoid the injury bug and make use of their numerous draft picks, don’t be shocked to see this team force their way into the playoffs.