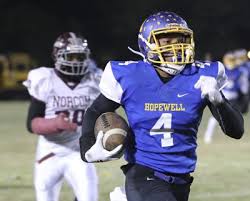 Last year defenses shined when these teams met – first a 13-0 Hopewell win in Portsmouth, then a 14-12 Norcom win in Hopewell that knocked the Blue Devils out of the playoffs in the semi-finals.

So when Hopewell, still in the first quarter, was locked into a 19-13 battle with the Greyhounds, people on both sides might have said, “Who let the dogs out?”

Hopewell raced out on the opening drive, moving the ball systematically down to the four yard line before Tre Henderson took it into the end zone for the first of his 5 touchdowns.

During Norcom’s first possession, quarterback Jacoby Smith fumbled as he rolled left and attempted to throw back across his body.  On the very next play, Hopewell’s talented offensive line helped spring loose Robert Briggs who sprinted from 11 yards out untouched for a touchdown.

Norcom then answered with a strong drive that finished with Demonte Dunlop running it in from 4 yards out to make the score 13-6.

Henderson countered on the ensuing kickoff with a 99 yard return for a score. What made that touchdown all the more remarkable was how Henderson was thinking of downing the ball in the end zone for a touchback.  But when the ball died at the one, he started taking it back, and almost slipped and fell. Regaining his balance, he streaked down the left side line for the score – this score complemented his 95 yard run from scrimmage last week for a TD.

With Hopewell now leading 19-6, Norcom countered with a picture perfect pass from QB Smith to wide receiver Shyhiem Cannon covering 67 yards for the touchdown to shorten Hopewell’s lead to 19-13.

It was around this point in the game, when  Hopewell fans might have become concerned with the kicking game. Missing regular kicker Boonsong Paxton because of a quad injury suffered the day before, two of three extra points had been missed.

While the “pooch” kicks to Norcom led to several good Greyhound returns and excellent field position throughout the night, Hopewell’s talented defense created strategic stops, and on the night tallied 7 sacks. They shut down’s Norcom’s offense in the second quarter on their way to 21 unanswered points and their 40-13 halftime lead.  The dynamic running duo of Henderson and Briggs was complemented by several good runs from QB Joe Eliades.

While it is usually difficult for teams in all sports to maintain a large lead into the second half of games, this game was no exception. Credit first Norcom for their no quit attitude. When QB Smith went out with an injury, their backup Nasir Cross consistently made impressive mid to long-range throws to wide receivers.

Both Norcom quarterback’s ability to throw the long ball so efficiently could have, on another day, been difficult for Hopewell to manage.  Combined with an excellent running attack, it was Norcom’s penalties that largely became their undoing. They regularly faced third and at least 20 yards to go.

While Hopewell’s secondary was effectively challenged, their front line and linebackers played standout football. Keyon Williams and Reggie Ruffin again led the way:  Williams with 10 tackles and 4 sacks, and Ruffin with 5 tackles and two sacks. Kaivion Cox and Jacen Fowlkes chipped in with 8 and 6 tackles respectively.

Hopewell now prepares to visit the Henrico Warriors ( 2-1) next week.  The 2-0 Blue Devils carry the momentum of their strong offensive and defensive line play,  together with the play of Henderson – 14 carries for 102 yards, 5 touchdowns ( and two-game average of 109 yards per game, 6 rushing TD’s one pass reception for TD , one kickoff return for TD,  one interception, and several other key defensive plays), plus Briggs – 14 carries for 188 yards against Norcom with 2 TD’s and a two-game average of 151 yards per game and totaling 4 touchdowns.   Whew!

So Hopewell, as I see it, has two concerns heading into Henrico.  Whichever kicker is available, they will only be kicking in their second varsity game.  Each kicker, Paxton, and Alexander Rockwell gained their rhythm as the game progressed.

The second concern involves the possibility that the Warriors may stack the defensive line and dare Hopewell to throw the ball. While Eliades did complete 50% of his passes ( 4-8) , they totaled just 25 yards, and only were passes to the flat to running backs.  One of those passes was intercepted and returned for a touchdown.

In the first game against Tabb, he completed passes to four different wide receivers en route to a respectable 5-9 for 78 yards.  His ability to reconnect with his wide receivers will force defenders to respect the pass, and not put too much pressure on the offensive line and running backs. Both  Briggs ( fourth quarter) and Henderson were hobbled at times by injury. While Henderson returned, Briggs did not and hopefully his leg injury is also a minor one.

Football, like all sports, is constantly a game of adjustments.  Apart from the pure talent of players that can lead a team to victory, it is so often the strategic coaching shifts that help as well to propel a team to victory.

Hopewell is blessed with a talented group of dedicated coaches that are committed to helping unleash the quality of talent within these players, and to help them forge not only their individual identities, but to help them work together for team goals that surpass individual accolades.

With each defensive, offensive, and special team player doing the best they can, their individual efforts produce, at best, a team wins.  When a team loses, or doesn’t play well at times, players and coaches seek to make these adjustments so as to play better next time. If a player goes out with an injury, they empathize and hurt with the teammate who is injured.

They win and lose as a team, and in the process, become better acclimated to life beyond high school. May God continue blessing each of our young people in this important and strategic time in their lives – times where these football experiences will later help shape choices in their future life experiences.

Jeff Butler is the Pastor of Woodlawn Presbyterian Church in Hopewell and calls the play by play for each Hopewell Football game over WHAP Radio AM 1340 and 96.9 FM.  You can also listen to each game on your computer at www.foxsports1340am.com and click “Listen Live” , or on your phone by dialing 1-605-313-0571.