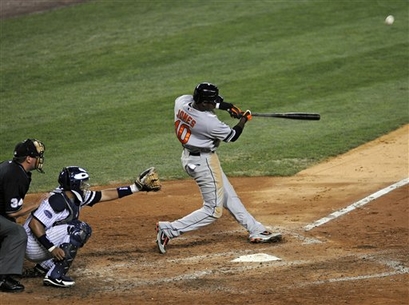 Outfielder Adam Jones was traded from the Seattle Mariners to the Baltimore Orioles, along with pitchers George Sherrill and Chris Tillman, ten years ago this past Thursday.

Jones grew up in Southeast San Diego, excelling in basketball, football and baseball. Jones graduated from Morse High School, batting .406 as shortstop and pitched to a 2.71 ERA. He would be drafted by the Seattle Mariners in the 2013 MLB Draft with the 37th pick in the first round. Jones initially started out as a shortstop, but would go on to play in the outfield.

The young and athletic Jones would have a cup of coffee with the Mariners in the Majors, slashing .230/.267/.353, batting in 12 runs and hitting three home runs in 139 at-bats. Then on February 8, 2008, Jones’ career changed forever. He would be traded to the Orioles with the aforementioned Sherrill and Tillman for left-handed starter Érik Bédard.

Since joining Baltimore, Jones has become the leader of the club, a five-time All-Star and a four-time Gold Glove Award winner. What makes things more interesting is that Jones had one of the best seasons of his career as a 31-year old. In 2017, Jones slashed .285/.322/.466, batting in 73 runs and hitting 26 home runs.

It wasn’t always smooth sailing for the Orioles during Jones’ tenure. In his first four seasons with the club, Jones enjoyed a great deal of success, but the same couldn’t be said for the team. From 2008-2011, Baltimore went 267-380 (a winning percentage of .413). In four straight seasons, Baltimore failed to make the postseason or even win 70 games.

Jones wouldn’t be alone in his crusade to make the team better. In 2010, the Orioles hired Buck Showalter to be their new manager. Showalter immediately looked towards Jones, catcher Matt Wieters and right fielder Nick Markakis as his leaders. Over time, Baltimore would bring on more players that filled holes on team, including signing free-agents shortstop J.J. Hardy in 2011, outfielder Nate McLouth to a minor league deal in 2012, pitcher Jason Hammel in 2012, and acquiring infielders Mark Reynolds from the Arizona Diamondbacks) and Chris Davis in a trade with the Texas Rangers in 2011 and calling up third baseman Manny Machado.

In 2012, the Orioles, under the leadership of Jones, would make a return to the playoffs. In the 2012 AL Wild Card Game, Baltimore defeated the Rangers with the help of a gutsy performance by veteran starter Joe Saunders. Though the Orioles would lose in the ALDS to the New York Yankees, the culture of the club was changed.

His leadership has been unquestioned on the team and within the community as a whole. Jones has spearheaded the RBI program in Baltimore to assist the growth of the sport in Baltimore City, supported the Jackie Robinson Foundation’s scholarship program for teens to attend college, helped to renovate three Boys & Girls Clubs and has been heavily involved in other charitable works in the city and other places in Maryland.

Going into the final year of his five-year/$85 million deal, Jones has been the face of the franchise for the past ten years. Contract negotiations haven’t yet begun to extend his deal. Also, some have spoken of moving Jones from his usual center field position to play right field. With the call-up of newcomer Austin Hays, it could be a possibility that Jones could be moved to a new position.

Despite all of that, Jones has been one of the most productive players and important leaders in Orioles history. His legacy with team will live on far beyond his time in center field and his playing career. His assistance with turning around the club’s fortunes will not be lost on many. 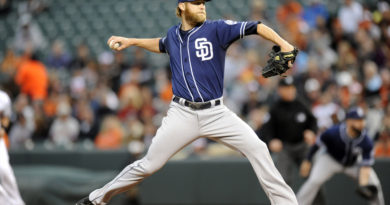 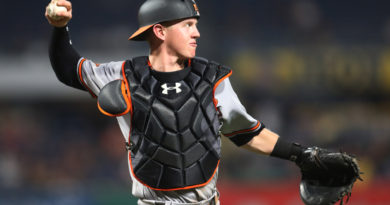 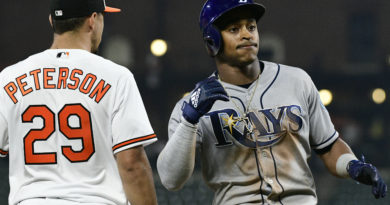