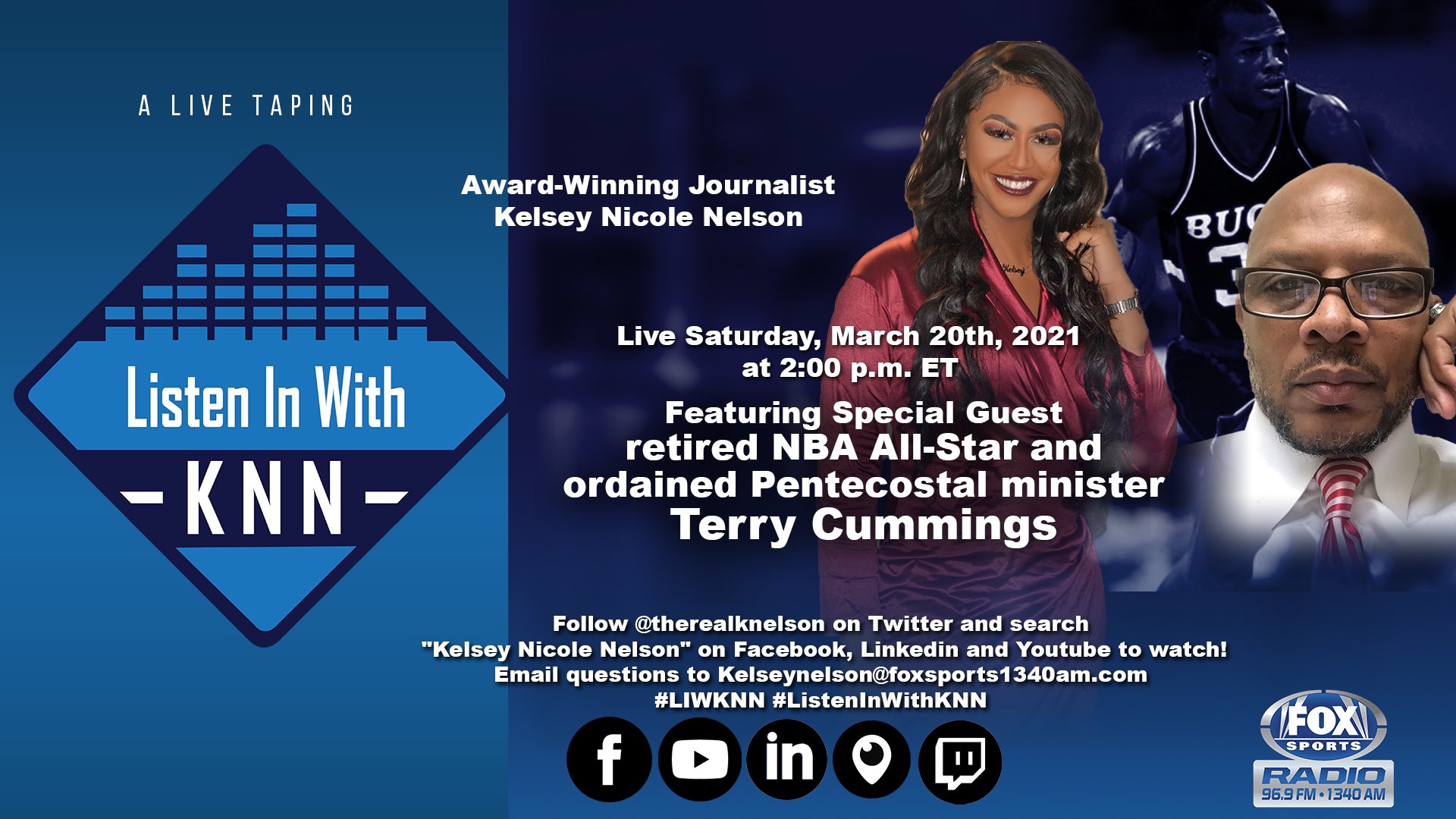 On the latest episode of Listen In With KNN on Fox Sports 1340AM, host Kelsey Nicole Nelson welcomed former NBA All-Star and ordained Pentecostal minister Terry Cummings to the show.

Speaking of his journey, he was raised in the Cabrini-Green section in Chicago, Illinois. Cummings became an ordained minister at the age of 16 as an escape from his environment. He first played hockey and baseball. However that changed in the summer between his ninth and 10th grade years when he got into basketball with the help of his older brother after growing from 5’8’ to 6’4.

“I’ve always had this little chip on my shoulder being the younger brother of the guy that everybody talked about. I was always working to prove myself worthy of being on the same court with him and then when I started to grow, that same chip grew too. It helped me throughout my career and my life for me because I don’t take anything for granted,” Cummings said.

As a result, he transferred from Harlan High School and went to Carver High School to sign up for night school. Cummings didn’t play very much during his sophomore year but learned a valuable lesson about waiting his turn. Cummings took that lesson to heart and played in the Summer Pro-Am League in Chicago against NBA, college and overseas players where he shined on the court.

“I didn’t go to any of the camps and didn’t have the acclaim that all the other guys like Mark Aguirre and Doc Rivers had. I was called a blue chip because I literally came from nowhere. By the time my junior year came around, it was my team at Carver and I think I averaged about 23 and 16 rebounds. I was the only one that wasn’t surprised,” he said.

After an impressive senior year, Cummings wanted to go away for school as he visited the University of Iowa and the University of Nevada in Las Vegas (UNLV). But in the end, he decided to stay home and attend DePaul University because of its head coach, Ray Meyer. At DePaul, Cummings was an All-American player and the team 79-6 in his three years there. engaged students in Bible Study lessons. Additionally, he ran the campus ministry where he taught young people about Jesus Christ.

“We would have sometimes 100 young people and they were everything DePaul was. It was really special because for me, I come from an all-Black environment and when I hit the campus, it was more all-White than all-Black. I had to learn how to relate to them and I found out in that relating process that they are no different than us,” said Cummings.

After his collegiate career ended, he was the second pick in the 1982 NBA Draft by the San Diego Clippers in a draft class that featured James Worthy and Dominique Wilkins. In his rookie season, he averaged 23.7 points, 10.6 rebounds, 2.5 assists and 1.8 steals per game and was the Rookie of the Year. Cummings was traded to the Milwaukee Bucks in 1984 where he learned the NBA game and became a two-time All-Star.

“Once I started to get groomed in Milwaukee when I was traded there at the end of my second year from the Clippers, Nellie (Don Nelson) made things clear for me. He told me, ‘I need you to score, rebound and defend the biggest and strongest guy on the court.’ I respect and appreciate people more who tell me what they want and who they are than those who hide those things from me and make me have to find out,” he said.

Cummings played 18 seasons with the Clippers, Bucks, San Antonio Spurs, Seattle Supersonics, Philadelphia 76ers, New York Knicks and Golden State Warriors. Despite being a successful basketball player and minister, his greatest accomplishment is being a father to three sons, Antonio, T.J. and Shawn.

“I’ve been mature about it knowing that I don’t have all the answers but I’ve given everything to make sure that my sons had every opportunity to be the best them they can be. For me, that is still one of my greatest joys is that I fathered these three boys and love them with my whole heart. Those are pieces and parts of me that qualify me for who I am.”