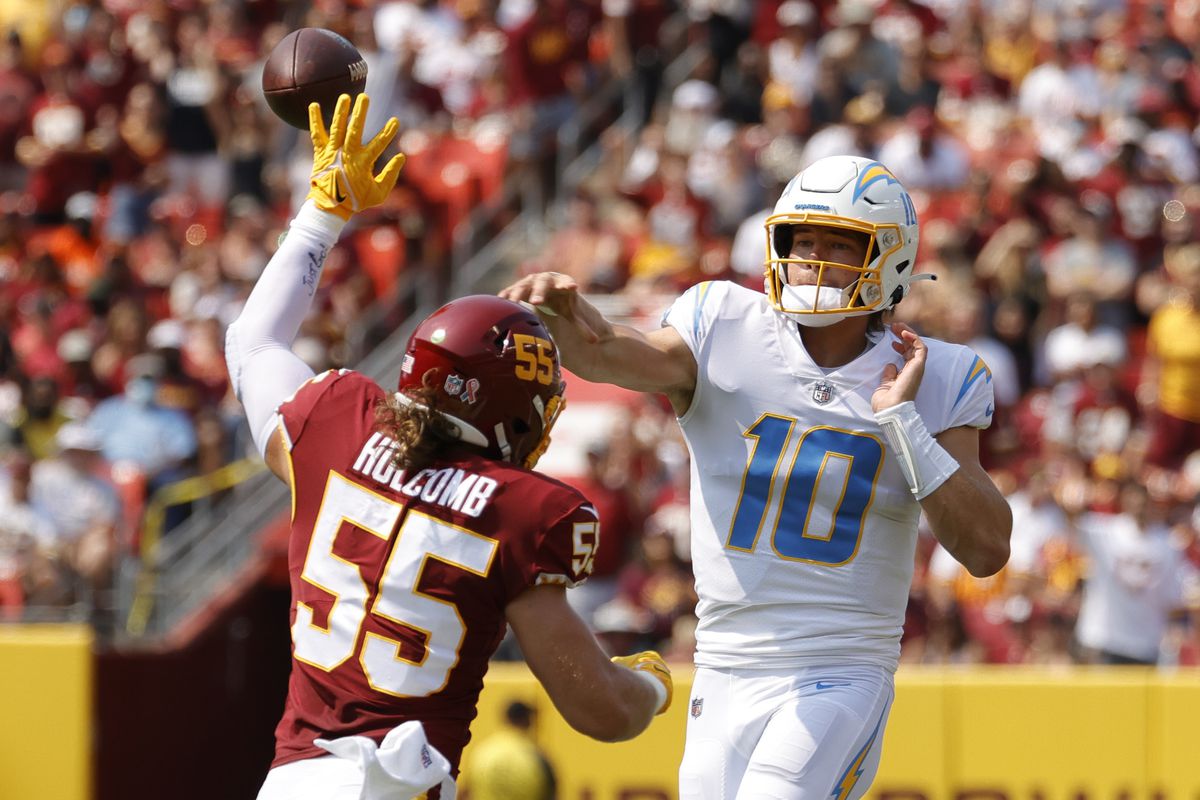 Landover MD- On a beautiful opening day for the Washington Football Team, the visitors took advantage of the California type weather to win a hard fought game 20-16. While Washington was looking to get back to the playoffs, the Chargers are in a mode to get there now. The Chargers were the more aggressive team from the start and made plays when it mattered late.

The Chargers took the opening kickoff and marched straight down the field for a quick 7-0 lead. Those scripted plays kept Washington off balance and attacked the defense for rotating players based on their formation. Justin Herbert was masterful today and got the ball out quickly to open receivers. Keenan Allen and Mike Williams both were all over the field making plays. The Chargers had a great game plan to line Allen up everywhere and make him hard to double cover. Allen finished with nine receptions for 100 yards and Williams had eight receptions for 82 yards and a touchdown. The defense did a solid job on Austin Ecekler holding him to 57 yards and one touchdown on 15 carries.

The defense’s worst stat was giving up 14 of 19 third down conversions. That is horrendous and something that must be sured up if this team wants to compete. Too many times on third down Herbert had time to hit open receivers and extend drives. The Chargers had a seven and a half minute drive at the end of the first half and the final seven minutes of the game to seal it. The defense maybe good and will get better, but if that does not change this team will lose games.

The offense under Ryan Fitzpatrick looked bland and with the exception of a 35 yard pass interference penalty that led to the first field goal, did not do much at all. Fitzpatrick was injured on a sack by Ucheenna Nwosu in the second quarter and did not return. The team said it was a right hip injury and he was out for the game. Taylor Heinicke came in and infused energy into the offense with his legs and play making ability.

Antonio Gibson was the star on offense today but he had one of the costliest plays as well. After an interception by William Jackson III, Gibson fumbled it on the next play which gave the Chargers 1st and goal from the 5 yard line which they converted into the winning touchdown. Washington actually won the turnover battle 2-1 but Washington’s was much more costly.

Moving forward on this short week the team certainly has some questions to answer. First, the defense must get off the field on 3rd downs. Second, the defense must hit the other team’s quarterback. And lastly, the offensive line must protect the QB better so they can get the ball down the field. The New York Giants will be here and have won the last five meetings since Alex Smith and Adrian Peterson won in the Medowlands in October 2018.

FedEx Field and the fans were back and ready for the team to take the next step towards a contender, instead Washington spun its wheels and needs to get the ship righted quickly or that good vibe and defending champion goes away quickly.