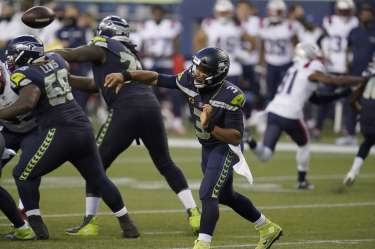 Additionally, it’s tough being a Falcons fan after blowing a 15 point fourth quarter lead and not making an effort to recover an onside kick which led to a Cowboys game winning field goal. This Atlanta loss felt like 28-3 all over again. But despite what went wrong, there were some big time individual performances that led to victories. Here are the top five from the second week of action.

The Cowboys were dead in the water when they trailed by 20 points in the first half and lost three fumbles. But their franchise quarterback put the team one his back and led them to a 40-39 win with some lucky breaks. Prescott became the first player in NFL history to throw for 400 yards and have three rushing touchdowns (all in the second half).

Also, it was the 13th time that he threw for at least 300 yards in a game with the Cowboys tying him with Troy Aikman. Dak was the brightest star and if he continues to perform at a high level, Jerry Jones will have no choice but pay his franchise QB.

Josh Allen did something that Buffalo’s previous franchise QB Jim Kelly couldn’t do. The third year pro became the first player in Bills history to throw for over 400 yards and four touchdowns. It was also the first time that he had back-to-back 300 yard passing games in his young career.

Allen is continuing to elevate his play as he’s completing 70.4 percent of his passes and six touchdown strikes without an interception. The Bills could be taking that next step in winning the AFC East from the Patriots as long as their quarterback answers the bell.

Wilson is coming off his impressive Week 1 performance versus the Falcons. He followed it up with another MVP type of game against Bill Belichick and the Patriots. Despite throwing a pick-six, he spread the ball around and threw for five touchdowns to DK Metcalf, Tyler Lockett, David Moore, Freddie Swain and Chris Carson.

Wilson was in a battle versus Cam Newton and it took a goal line stand by the Seahawks defense to hold him out of the end zone with no time left. The “Let Russ cook” slogan working out okay as he has nine TD passes in his first two games of the season. It looks like this will be an MVP season for Seattle’s QB.

Entering the final year of his rookie contract and with the Packers drafting his potential replacement in A.J. Dillon, Jones came into 2020 with something to prove despite his 19 touchdown 2019 campaign. He balled out on Sunday versus the division rival Lions with 236 yards from scrimmage.

On the very first play of the third quarter, he went 75 yards to the house. It was the longest run by a Green Bay running back since Ahman Green did it in 2004. That score was his first one in his career versus Detroit. The Packers have come out the gate blazing with 40+ points in the first two weeks of the season.

In the battle of Ohio on Thursday Night, it was a matchup of number one picks Baker Mayfield and Joe Burrow. But it got overshadowed by the Browns 2018 second round pick Nick Chubb. The ex-Georgia Bulldog had his fifth career game of at least 100 yards rushing and two scores.

His backfield partner, Kareem Hunt had 86 yards and a score. This is arguably the best RB duo in the league. In total, Cleveland ran for 215 yards complementing Mayfield’s passing game. Running the ball will be an emphasis for first year head coach Kevin Stefanski.