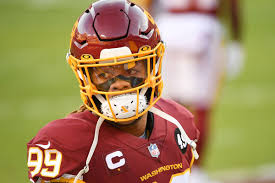 As free agency push is over, it is now the fans favorite time of the offseason with the draft upcoming this week. The draft is the best way to add young talent to roster. As we go into year two of the Ron Rivera era with a reshaped front office, Washington is in a unique position of having a solid team but not yet a true super bowl contender. In the past few years Washington has been hit or miss in the draft. They have done good in the first round, not good in the second round, terrific in the third round and have found some seventh round gems. I believe Washington has three potential ways of attacking the draft.

This is what I believe is the most likely scenario. The best available player that is here at 19 is who the team will select. Depending on who falls the choice will fall between three positions: Linebacker, Offensive Tackle, or Wide Receiver/Tight End. Depending on fit and scheme will drive the selection. Washington has used a first round pick the last four seasons on the defense line, which paid dividends this past season.  The only outlier was the 2019 15th overall pick used on quarterback Dwayne Haskins who is no longer on the team. Rivera and the staff will be looking in some combination of those three positions in the early rounds. If Jeremiah Owusu-Koramoah falls to 19, he is the perfect fit for Jack Del Rio’s defense and solves one of the two issues on the defense. Then in the second round you draft a tight end or offensive tackle. If Offensive Tackle Christian Darrisaw is your pick at 19 then a LB like Jabril Cox would be the second round target. All of those players have been mentioned and connected to the team so this strategy is dependent on what happens before them.

This is the scenario that the fanbase would love to see the most. This draft is loaded with five potential first round quarterbacks and Washington, who has be devoid at the position for it seems like forever, definitely needs one. Sitting at 19 is not ideal to get any of those quarterbacks so a massive trade of two to three future first rounders and a probably a third from this year to get done. Do you mortgage the future for a signal caller? Trevor Lawerence and Zach Wilson will most likely be the first two picks but this gets interesting around Trey Lance, Mac Jones, and Justin Fields. If Fields drops and ends up around 10, then Washington may make a move for him. There is some interest there and his skill set fits Scott Turner’s offense. Ryan Fitzpatrick would be the perfect placeholder so Fields wouldn’t have to play right away. However, do you trade so much away for a player that should not even play in 2021? I don’t think Ron Rivera would gamble in this way when it seems there is a long term plan for the team. But never say never.

This is the scenario that has not been talked about but it is very viable for the team. If a team gets anxious for a player someone may call and give Washington the opportunity to move back and add more picks. I think Washington would been keen to do this because they can still address needs and Rivera can add more of his type of players to the roster. Also this gives you more picks for if you want to trade up next year or trade for a quarterback that is already in the league. I have these odds around 10% but depending on how the draft is going teams do get jumpy. Teams to watch for would be Green Bay, Seattle, Kansas City, and Cleveland.

Honestly feel Washington will either draft Jeremiah Owusu-Koramoah if he is there, if he is not there then Christian Darrisaw. Outside chance for Rashard Bateman and Trevon Moehrig-Woodard. All of these guys fit the Rivera mold and would be solid additions to the roster.