Baseball season is upon us and the Washington Nationals baseball club is set to return to the Navy Yard of DC. The defending NL East champions are primed to bounce back after a disappointing playoff finish. With high expectations and even a higher payroll, the Nationals are ready to play ball.

With a 95–67 record, the Nats won their 3rd NL East crown in the last 5 years during the 2016 season. The team had a Cy-Young award-winning season from pitcher Max Scherzer. And Silver Slugger performances from Daniel Murphy and Wilson Ramos. But as I mentioned before, the Nationals did not get the job done. They lost in the NLDS to the Dodgers and did not reach the NLCS….again.

The Nationals were a little quiet this offseason.

Their major signings were: catcher Derek Norris, outfielder Adam Eaton, infielder Stephen Drew, first baseman Adam Lind, and outfielder Matt Wieters. Due to this, the Nationals payroll dropped out of the top 10 highest payrolls in the league. Saving money is wise but Nationals fans are not used to this compared to other offseasons.

Nevertheless, the roster is still filled with playmakers and game changers.

The Nationals opened their new Ballpark of the West Palm Beaches this spring training. The complex that is also shared with the Houston Astros is an $150 Million dollar complex in West Palm Beach, Florida. It has two MLB sized field with four minor league sized fields as well.

On the field, it’s been a productive spring training for the Nats. Major stars are starting to get back their levels of regular season performance. After a down season, Bryce Harper is showing signs of dominance. He is tied for 2nd in the Major League with 6 home runs. HE has 14 hits and 8 runs in 20 spring training games.

A positive thing to see are a number of players who have played a majority of the spring training games. First basemen Adam Lind and Clint Robinson has both played over 20 games respectively. Right outfielder Adam Eaton and 2nd baseman Stephen Drew has also played the majority of the games. Nationals Manager Dusty Baker is slowly molding the new signees into the gameplay and culture of the Nats.

The pitching staff for the Nationals has been decent this offseason. But the biggest attention has been on Max Scherzer. He suffered a stress fracture in his right finger during the World Baseball Classic. He is currently projected to make his first appearance within the first 5 games of the regular season. Starting on opening day is really out of question at this point. Nevertheless, the Nationals has seen strong starts from Stephen Strasburg, Gio Gonzalez, Matt Albers, and AJ Cole.

Uniform changes are always an exciting but mysterious part of the offseason. The Nationals debuted a new stars and stripes jersey and caps in December. The team suggested that the uniforms will be worn a few times during the season. 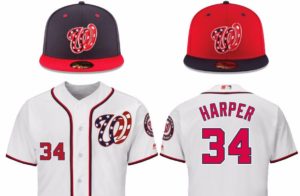 In Nationals Park, they are adding new field level seats, primarily for ticket season holders. They will fully announce all new changes to the stadium this week to the media.

Schedule wise, the Nationals can win over 100 games again, but the team will really have to earn that feat. They will face the defending champions Chicago Cubs for a four-game homestand. They will have 14 series within their division for the first half of the season. The Nationals will start their interleague play on May 8th against the Baltimore Orioles, in a highly competitive series. After the All-Star Break, the majority of the schedule is filled with non-NL East opponents, which means that the 1st Half of the season will mean a lot when it comes to divisional bragging rights.

The Nationals are the clear favorites in the NL East coming into this season. Many baseball insider projects the team fighting with the Dodgers and Cubs for the top NL record for the 2017 season.

Washington’s baseball club is set for another successful season.