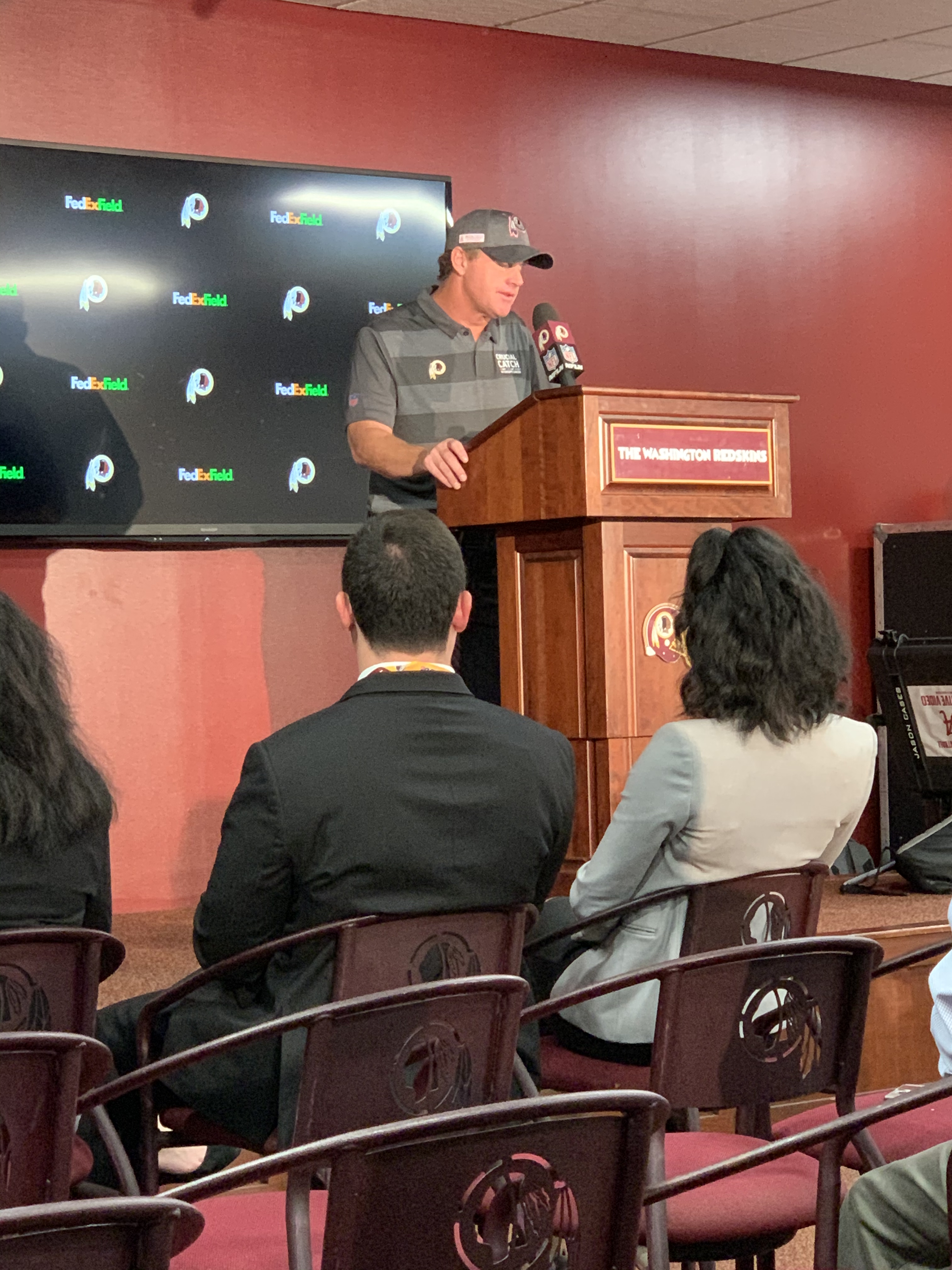 The sinking season for the Washington Redskins continued yesterday with a methodical defeat from the defending Super Bowl Champion New England Patriots, by the score 33 to 7. The game was a microcosm of the Jay Gruden tenure as the Redskins coach. Good moments, coupled with a lot of almost moments, with some embarrassing moments sprinkled in for good measure.

The Redskins started off well with an electrifying 65 yard touchdown run by Stephen Sims. After that the offense failed to put another point on the scoreboard. Starter Colt McCoy was under duress most of the game behind a depleted offensive line, finishing 18 for 27 for only 119 yards and one interception. McCoy was sacked 5 times, chased repeatedly, and did well to only turn the ball over once. The Redskins did run for 145 yards but 65 of those came on Sims’ touchdown run. With Brandon Scherff and Chase Roullier both out Sunday, the offensive line was bad and penalized often. Facing the number 1 rated defense did not help matters at all.

Tom Brady, by his lofty standards did not a great game. At FedEx Field yesterday, the game seemed like more of a celebration or coronation at Foxboro than a road game. Brady looked in control and the leader of the best franchise in the NFL. Brady, finished the game completing 28 of 42 passes for 3 touchdowns and one interception. The Redskins defense played a lot of zone yesterday and in the first half it was working. They held the Patriots to 12 points and were extremely competitive. Then in the second half the Patriots made a few adjustments and took control of the game with relative ease. This again has happened too often under Jay Gruden.

As owner Daniel Synder and team president Bruce Allen watched on Sunday as another fan base made FedEx field their own, they should ponder the bigger changes that need to be made to a broken organization. The Tom Brady number 12 jerseys invaded FedEx Field and showed Synder and Allen what a top notch organization looks like. A no nonsense coach, a quarterback who is the unquestioned leader on the field and works the hardest off of it, and an owner who writes the checks and stays out of the way. Do the Redskins’ leadership want to win, of course they do. Do they know how to win, of course not.

When your season record is 0-5 and overall record as head coach is 35-50-1, you don’t hold onto jobs this long in the NFL. Gruden had numerous issues as a coach that caused his own demise: poor in game management, lack of in game adjustments, and his inability to develop quarterbacks. Brought in to help fix Robert Griffin III, Gruden decided that Kirk Cousins and Colt McCoy were better options. Then after seeing the faults in Cousins let him go and did his best work with Alex Smith. Smith’s injury changed a promising season to the disaster the team is in right now. But Gruden made this franchise respectable and competitive when it needed to be. Gruden had to be made the scapegoat, but he is far from the biggest problem with franchise.

All the stakeholders in the Redskins organization are dirty in this mess that has been created. Bruce Allen wanting all of the control and not coming forward and speaking for the organization, Dan Snyder for continuing to listen to Bruce Allen as a friend and not as an employee, for Gruden and his lack of motivation and instruction as a coach, and players griping about fan support. The Redskins problems are far from black and white. It’s more like shades of grey and the Redskins just removed one shade from the pallet. The real losers are the fans that have endured this loss of respectability. Releasing Gruden is a start, but until Bruce Allen is held accountable, status quo will continue at Redskins Park.