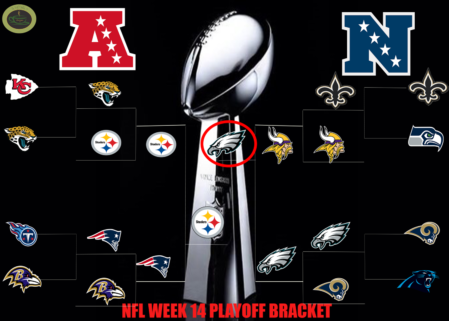 Week 14 of the NFL season is upon us. Chelsea serves up the tea on the season and the ongoing race for the Lombardi Trophy.

Last week, I mentioned that I wasn’t going to speak on behalf of the Philadelphia Eagles any longer. However, after Sunday night my thoughts cannot be suppressed.

Were the Eagles exposed by the Seattle Seahawks on Sunday night? Yes. But is that any indication of their likeliness not to win the Super Bowl? No.

The Seahawks were the underdogs heading into that matchup and that was the perfect formula to add to their preparation against the Eagles, along with their defense and “The Professor,” Russell Wilson, under center.

Losing against the Seahawks was necessary to build that last pillar underneath the future Super Bowl LII champions. Think about it. They’ve faced the Carolina Panthers’ and Denver Broncos’ defense and those wins added to the lack of mental preparation for the Seahawks.

To put things in more simpler terms, snapping their nine game winning streak is the best thing to happen to the Eagles this season and when they face the Minnesota Vikings in postseason, they’ll know how to make the proper adjustments facing against a tough defense and I’m sure they’ll move the ball more on the ground. Adding Jay Ajayi to their backfield was one of the biggest acquisitions during the season. Why not utilize him? He’s going to be the key for the Eagles in postseason.

As I wrote a couple days ago, the Baltimore Ravens are surging atop the wild card race. The combination of their defense and run game is the reason for their current success. But where they will fail in the postseason, especially facing the New England Patriots, is with quarterback Joe Flacco.

We’ve seen in their previous three wins that all Flacco needs is for his offensive line to protect him to give him some comfortability in the pocket. But sometimes the desire for that comfortability comes with the applause for simple things that a quarterback is supposed to do. It’s Week 14 for goodness sakes, Ravens fans shouldn’t get excited when Flacco throws a bomb to Mike Wallace, as if it’s a once in a lifetime thing, even though it really is.

Moral of the story, it’s too late in the game to wish upon a star that Flacco could throw the ball really far. No seriously. Flacco can get his team to the postseason but he won’t get further beyond the divisional round.

With that said, it’s pretty clear that my mind isn’t changing about the future Super Bowl LII champions and we’re just 59 days away from it happening.