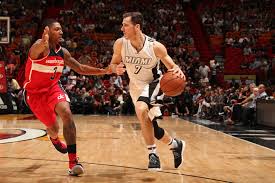 The Washington Wizards are now 0-3 against the Miami Heat this season after a 106-103 loss.

Who Want is More??

In their regular season home game finale, Washington came out on a 17-9 run to set the tone.  However, the Heat were spoilers as they went on a 8-0 run to tie the game up.  After this, the two teams battled back and forth the rest of the quarter.  The quarter ended with Bradley Beal hitting a jumper at the buzzer.  This shot gave Washington a one-point lead going into the second period.  In the second quarter, both teams showed how bad they wanted this win.  The biggest lead in the second was five points by the Heat twice.  The quarter ended with both team tied up at 52 going into halftime.

In the third quarter it was the Kelly Oubre, Jr. show.  Oubre replaced Otto Porter, Jr. in the starting lineup due to Porter having back problems.  Oubre was scoreless until he dropped 11 points in the third quarter.  Despite Oubre’s great effort, Miami had a better quarter as a unit.  The Heat scored the first points of the quarter to take a two-point lead.  Washington did not regain the lead the entire quarter.  They were outscored 26-22 and went into the final quarter down by four points.

Like many times this season, Washington needed another comeback victory for their last regular season home game.  Just like the second quarter, both teams would not let the other gain the edge.  With seven minutes left, Markieff Morris gave Washington their first lead since the second quarter.  Morris hit some clutch shots during the fourth quarter to keep Washington in it.

Another Game Too Close to Call

After a couple of turnovers by Washington, Goran Dragic hit a clutch jumper with 1:32 left in the game to give Miami a three-point lead.  Morris came right back with a three to tie the game up.  On the other side, Hassan Whiteside hit a jump hook over Marcin Gortat to give Miami the lead back.  Gortat redeemed himself with a tip-in bucket of his own to tie the game at 102 with 47 seconds left.  After Beal gets a defensive rebound by hustling on the hardwood, Wall goes down the court and draws a foul.  He misses the first free-throw but hits the second to give Washington a one-point lead with 20 seconds.  James Johnson hit s spin move on Morris to get an easy bucket to give Miami the lead with 11 seconds.  On the inbound pass, Oubre throws the ball over Wall’s head for an untimely turnover.  Josh Richardson was fouled by Wall and hit two free-throws to Miami a three-point lead.  Beal took the last shot for Washington but was blocked by Whiteside, giving Miami the win.

All five starters were in double figures with Morris leading the way with 21.  Beal and John Wall combined for 32 points, 13 assists, 11 rebounds, four steals and three blocks.  Gortat had his first double-double since March with 11 points and 11 rebounds.  Ian Mahinmi had a nice game off the bench with 11 points and nine rebounds.  Whiteside led the Heat with 30 points and 12 rebounds. Johnson had 15 points, 10 rebounds and five assists.  Dragic finished with 18 points and seven assists.  Tyler Johnson had 19 off the bench for Miami.

On to The Motor City

Washington will travel to Detroit to face a Pistons team who was eliminated from playoff contention recently.  Last time these two teams met in Detroit, Markieff brother Marcus Morris hit a game-winning tip-in.  The Wizards have not forgotten about that game and will look for revenge Monday night.

With the Pistons not fighting for anything, they may sit some starters to give some younger players time on the floor.  Whether it’s the starters or not, Washington will win this game either way.  After that loss in January, Washington won 11 of their next 12 games.  Coming off a disappointing loss to Miami, Washington will be on a mission these last two games.  They are much more prepared for the matchup this time.  With the Wizards now a half game back of the Toronto Raptors, this is a must win game.