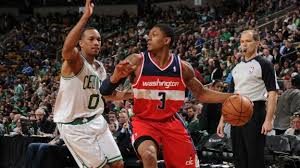 In one of the league’s newest rivalries, the Boston Celtics took home an 110-102 win over the Washington Wizards.

With the playoffs nearing, this was the most important game of this season’s rivalry.  Boston is second in the Eastern Conference with Washington trailing by a game-and-a-half.  Both teams are fighting for playoff positioning and it showed in the first quarter.  The Wizards took an early seven-point game on the road and look to have the momentum.  That was until the Celtics went on a 12-0 run to take a five-point lead.  Despite that run, the Celtics only led by two points at the end of the first period.  The first quarter was “The Bradley Show.”  Bradley Beal led Washington with 12 points, while Avery Bradley led Boston with 11 points.

In the second quarter, Brandon Jennings provided the spark off the bench the Wizards needed.  He had seven points and two assists in eight minutes.  Once the Boston starters came, the Celtics went on a 16-6 run to take a ten-point lead.  Boston went on to end the quarter on a 21-10 run and went into halftime with an 11-point lead.  Beal was the only player showing with 15 points at the half.  No other players scored in double figures in the first half.

Not So Much Luck In Boston

Boston continued their thrashing with an 11-4 run to start the second half.  Washington fought back but Boston home court advantage was too much.  The Celtics starters outscored the Wizards starters 71-52 following the third quarter.  Washington has been playing catchup all season long where they start slow and finish strong.  However, Boston is too good of a team to make a comeback on.  Following a 34-point quarter, Boston led Washington by 17 points going into the fourth.  Washington needed all the luck they could get to walk out of Boston with a win.

Washington started the final quarter on a 10-4 run to cut the lead down to 11 points.  They even cut the lead down to eight points but got no closer than that.  Beal led the Wizards with 19 points but only had four in the second half.  Wall had 16 points and eight assists.  The Wizards front court combined for 26 points.  Bojan Bogdanovic led the bench with 14 points.  Jennings also had a solid game with 10 points and seven assists in 15 minutes.  After a slow start, all-star Isiah Thomas had a game-high 25 points.  His backcourt teammate had 20 points.  Big man Al Horford had an all-around game with 16 points, nine rebounds, and five assists.  Jae Crowder had 16 points and nine rebounds.

Headed In the Wrong Direction

Things are not looking good for Washington.  This is another back-to-back loss and their fourth loss in five games.  The Wizards are in a serious slump at the wrong time.  With the playoffs around the corner, Washington needs to turn things around swiftly.  To make matters worst, eight of their last 12 games are on the road.  They have matchups against powerhouses such as the Golden State Warriors, Cleveland Cavaliers, and Los Angeles Clippers.  Although it would take an extreme meltdown, Washington could possibly not make the playoffs.

Their next game is against the Atalanta Hawks, where Washington leads the season series 2-1.  This game is at home for the Wizards so this is a big game.  They only have three more home games following this one so it’s a must-win situation.  The last time these two teams met in D.C., the Wizards won their first game of the season by three points.  Dwight Howard has been the most consistent Hawk in the season series.  He has had double-digit rebounds in each game.  Atlanta just lost a key player to injury in Kent Bazemore for the next 7-10 days.  Their lone all-star Paul Milsap is also hurt, although he may return Wednesday night against Washington.  The Wizards need to control the boards and play a good defensive game.  They have to stop starting so slow and come out in the first like it’s the fourth.