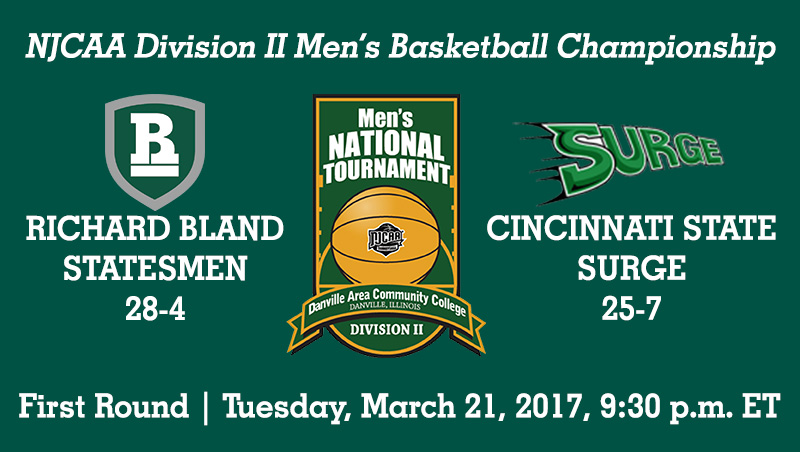 SOUTH PRINCE GEORGE, Va. — Richard Bland College, the No. 5 seed for the 2017 NJCAA Division II Men’s Basketball Championship, will play Cincinnati (Ohio) State Technical and Community College in the first round on Tuesday night, March 21 at 9:30 p.m. ET at Danville Area Community College in Danville, Illinois.  The District 15, Region 10 Champion Statesmen have an overall record of 28-4, and are making their second appearance at the national tournament in three years, while the District 11, Region 12 Champion Surge have a record of 25-7.  All games played during the NJCAA Division II Men’s Basketball Championship will be streamed online and available for free at njcaatv.com.

Scouting the Statesmen
Richard Bland, ranked No. 8 in the final NJCAA Division II Poll, is 28-4 overall after an impressive 78-75 overtime win past No. 3 Louisburg (N.C.) College in the Region 10 Championship game on March 11.  The Statesmen, who are an outstanding 102-29 (.779) over the past four seasons, are coached by head coach Chuck Moore, who is in his fourth season, and assisted by fourth-year assistant coach Brian Henderson, second-year assistant coach Preston Beverly and first-year graduate assistant coach Mike Wynn.

Scouting the Surge
Cincinnati State, ranked No. 17 in the final NJCAA Division II Poll, is 25-7 overall, after a 90-86 win past No. 5 Cuyahoga (Ohio) Community College in the Region 12 title contest, and is coached by Andre Tate.  The Surge have been led in scoring by sophomores Dante Battle (23.6) and Anthony Coleman (18.2), along with freshman Desmond Crosby (12.8).  Dante Battle leads NJCAA Division II in three-point field goals (126) and ranks seventh nationally in scoring.  Cincinnati State averages 93.3 points, while yielding 76.1 points for a scoring margin of +17.2.  The Surge have won two-straight games, and have eight wins in their last nine games overall.

Series History
Richard Bland and Cincinnati State are playing for the first time in the sport of men’s basketball.

100-Plus Wins | Four Years
Richard Bland earned its 100th win over the last four seasons with a 108-52 Region 10 quarterfinal victory past Vance-Granville (N.C.) Community College on March 5.  The Statesmen are currently 102-29 (.775) since men’s basketball was reinstated at the College in 2013, following a 20-year hiatus from competitive sports.

2015 NJCAA Division II National Champions
Richard Bland is making its second National Tournament appearance in three years, after winning the 2015 NJCAA Division II National Championship.  The Statesmen defeated John Wood (Ill.) Community College 64-53 on March 21, 2015 at the Mary Miller Center on the campus of DACC in Illinois.  Richard Bland finished its most memorable storybook 2014-15 campaign with a school-record of 32-4, winning the national title in only its second year back in action following the 20-year hiatus.

Up Next
If Richard Bland wins the opening round game, the Statesmen will play on Thursday, March 23 at 7 p.m. ET against the winner of the No. 4 Parkland (Ill.) (28-3) vs. Johnson County (Kan.) (24-8) first-round contest.  A loss on Tuesday would have Richard Bland playing onWednesday, March 22 at 7 p.m. ET.  Please continue to check rbcathletics.com and follow the Statesmen on social media via Twitter (@GoRBCStatesmen) and Facebook (rbcstatesmen) for tournament progress and game times this week.