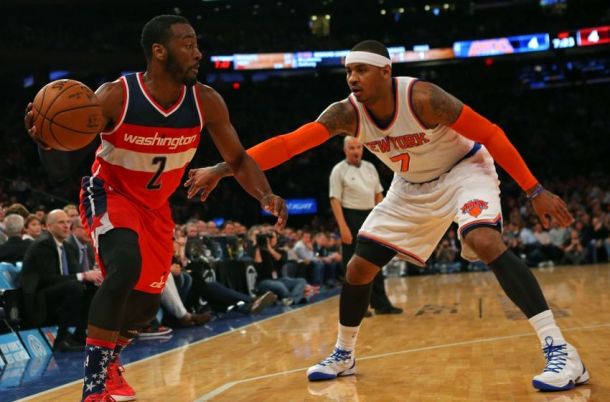 No Wall, No Problem

With All-Star Poing Guard, John Wall out with a quad injury and Otto Porter, Jr. missing his second consecutive game with a back injury, Washington knew they had to cover a lot of ground. The Wizards looked good without their two starters.  The two teams were evenly matched throughout the game.  Led by Bradley Beal, the Wizards ended the first period on a 14-2 run.  This surge gave Washington a 13 point lead going into the second quarter.  Beal torch the Pistons for 15 points in the first.

With two bench players starting the game off, the bench was short-handed.  Despite the bench being short-handed, the bench produced 16 first half points.  However, the Pistons starters came back in to cut the lead down to seven points.  Even though they had a shaky start, Washington got it together and finished the quarter on 10-4 run.  This gave them a 13 point lead going into halftime.

The second half let downs continue to haunt Washington.  They let Detroit back into the game getting outscored 31-24 in the third quarter.  The Wizards seem like a different team in the third and did not have the same energy.  The Wizards only led by six points going into the final quarter.

Things went downhill from there at the start of the fourth quarter.  Detroit started the final quarter on an 8-2 run to tie the game at 81 and force Washington into another comeback situation.  Despite the poor start, coach Scott Brooks left the bench players in the game following a timeout.  They did their part by keeping the Wizards in the game.  Although Detroit came back, the bench made sure they did not take the lead.  They left the starters in a good position for when they came back in the game.  The starters came back and push the lead back to eight points.

Although they are out the playoffs, Detroit would not give in.  With 1:24 left in the game, Reggie Bullock hit a three to cut Washington’s lead down to a single point.  Markieff Morris came right back with a clutch jumper to push the lead to three.  Beal drove the lane for an emphatic dunk with 34 seconds to give Washington a five-point lead.  With 18 seconds left, the Pistons cut the lead down to two points.  Beal was fouled on the next possession and made tow clutch free-throws to seal the deal.

Beal finished with a game-high of 33 points.  Morris had a good game with 20 points and eight rebounds.  For Detroit, Tobias Harris led the team with 22 points off the bench.  Ish Smith had a solid game with 16 points and nine assists as well.

Washington will end their regular season against a team they have not beat this season, the Miami Heat. The Heat have their number this season and the Wizards can not figure out why.  They had two three-point losses to them that came down to the wire.  The last time these two teams met in Miami, the heat won by 11 points.  Goran Dragic and Hassan Whiteside have been the Wizard killers all season.  This duo has single-handedly been the focal point of the Heat’s success against Washington.

If Washington can contain these two, they will end the regular season on a good note.  If the Chicago Bulls lose their final on Wednesday, the Heat will get the eighth and final playoff spot with a win.  Their season is literally on the line so they are going to attack out the gates.  Washington has a lock at the fourth seed in the East, but they will have a 50 win season if they win.  So both teams are playing for something significant.  If the Heat duo of Dragic and Whiteside can be stopped, Washington will achieve their 50-win season.