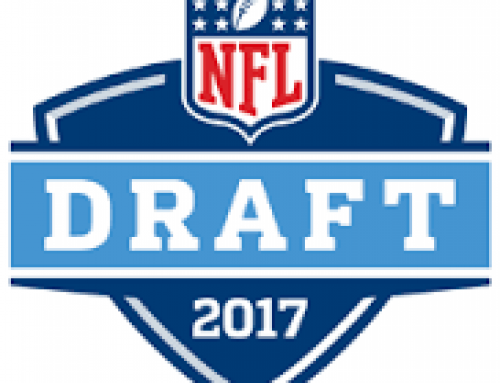 The NFL Off-season will officially begin in a matter of weeks. This is the time of year where we see plenty of different versions of mock drafts before the NFL Draft takes place. Our staff predicts who should go where at this early stage and after the first three it gets interesting:

1. Cleveland Browns – Myles Garrett, Edge, Texas A&M: Despite Garrett voicing his “aspirations” to be a Dallas Cowboy, the Browns grab Garrett with intentions on making him their premier pass rusher. At 6’5 265 lbs, Garrett is an elite pass rusher that can change a franchise. 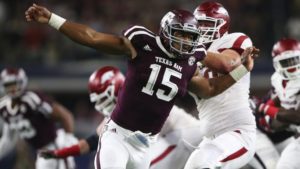 2. San Francisco 49ers – Mitch Trubisky, QB, North Carolina: New head coach Kyle Shanahan takes over a 49ers team that was 27th in total offense in 2016. The team will move on from former starting quarterback Colin Kaepernick and grab the 6’3 QB in Trubisky to be the flag bearer for the team.

3. Chicago Bears – Jonathan Allen, DL, Alabama: The Bears have made considerable moves to shore up their defense. In Allen, Chicago gets an athletic, versatile defensive end with Pro Bowl potential.

4. Jacksonville Jaguars – Leonard Fournette, RB, LSU: Former Jaguars head coach Tom Coughlin is Executive VP of the team. His fingerprints will be visible this offseason and it starts with the drafting of a man-child at running back. Fournette is a bulldozer and will give the Jags a considerable reason to rely heavily on the run game.

5. Tennessee Titans – Jamal Adams, S, LSU: The Titans struck gold as they have two 1st round selections thanks to a draft trade from last season. At fifth overall, Tennessee nabs the talented Adams. An aggressive safety that has a combination of versatility, hard-hitting ability, and impressive instincts. 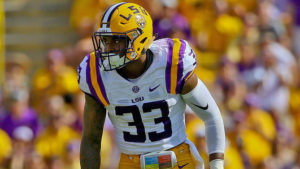 6. New York Jets – Deshaun Watson, QB, Clemson: Both quarterbacks Ryan Fitzpatrick and Geno Smith are free agents this offseason. Neither one has shown much to signal being a future building block. So the Jets go out and grab the talented Watson, which gives them a franchise quarterback that knows how to win. 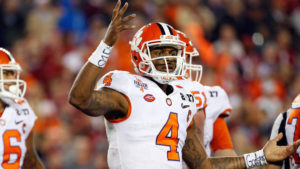 7. Los Angeles Chargers – Malik Hooker, FS, Ohio State: The Chargers very well need help on the offensive line and this can be a prime spot for one. Instead, the Chargers take a ball-hawking safety that is raw but has All-Pro potential. Hooker, along with DE Joey Bosa, CB Jason Verrett, and LBs Jatavis Brown and Denzel Perryman gives the Chargers a young and thriving defense.

8. Carolina Panthers – Solomon Thomas, DE, Stanford: Veteran defensive end Charles Johnson is facing free agency and the 30-year-old only has five sacks in the last two seasons combined. So the Panthers select Thomas to give the defense another big pass rusher that will make the transition from Johnson a little easier.

9. Cincinnati Bengals – Reuben Foster, LB, Alabama: The defensive line was almost nonexistent last season and a pass rusher such as Derek Barnett out of Tennessee is a possibility. Until an athletic linebacker such as Foster entices head coach Marvin Lewis enough to give his defense a boost at the position.

10. Buffalo Bills – Marshon Lattimore, CB, Ohio State: Buffalo has a number of key free agents this offseason and one, in particular, is corner Stephon Gilmore. The likelihood of Gilmore returning is not in his favor. So new head coach Sean McDermott, who knows a thing or two about corners while being the Panthers DC, goes out and grabs a talented corner to pair with starter Ronald Darby.

11. New Orleans Saints – Derek Barnett, Edge, Tennessee: Another pass rusher opposite Cam Jordan has been needed for quite some time. The Saints finally pull the trigger this time around and grab an intriguing talent in Barnett. He left the Tennessee as the program’s all-time leader in total sacks. 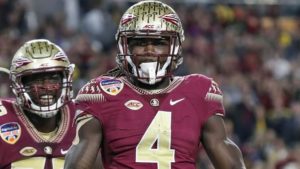 13. Arizona Cardinals – Corey Davis, WR, Western Michigan: QB Carson Palmer announced his return recently and along with him comes WR Larry Fitzgerald. Larry The Great is indeed great but he is not able to carry the load on this offense anymore. Arizona drafts the talented Davis, who gives Arizona a 6’3 receiving threat that will learn everything he needs to know from the veteran in Fitzgerald.

14. Indianapolis Colts – Tim Williams, OLB, Alabama: Cook may have been the primary target here for the Colts but Washington already snatched him in this mock. So the Colts address the pass rushing woes on the team with Williams. As long as his off-the-field issues are cleaned up, Williams can give the Colts a pass-rushing specialist on a defense in need of that element.

15. Philadelphia Eagles – Mike Williams, WR, Clemson: 2016 2nd overall pick Carson Wentz had an up-and-down rookie season but the future is bright for the QB. What he needs is a primary #1 WR that can be his safety valve and open things up on the offense a little more. Problem solved. 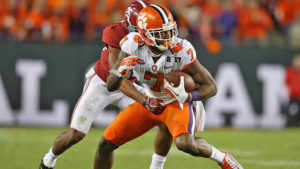 16. Baltimore Ravens – Marlon Humphrey, CB, Alabama: It may not be a top need but the option of having two big corners in Humphrey and Jimmy Smith will help out the defense tremendously. An edge rusher here is a great possibility as well.

17. Cleveland Browns (via Washington) – DeShone Kizer, QB, Notre Dame: In my previous mock, the Browns selected Kizer at the 12th overall. Here, they slide down five spots, get two more 4th rounders in the process, and still grab a solid quarterback in Kizer. While I am a supporter of RG3, his days in Cleveland may be numbered this offseason.

18. Tennessee Titans – Jalen Tabor, CB, Florida: The Titans may be keeping their fingers crossed hoping a big-body receiver falls here. Since their luck ran dry in this mock, they take another SEC defensive back to bolster their secondary. Tabor gives the Titans a nice upgrade at corner opposite starter Jason McCourty.

20. Denver Broncos – David Njoku, TE, Miami: Offensive line woes are evident with Denver but having an athletic force at tight end like Njoku will make the Broncos offense more explosive. Whoever mans the QB position in Denver in 2017 can have a trio of pass catchers in Demaryius Thomas, Emmanuel Sanders, and Njoku.

21. Detroit Lions – Zach Cunningham, LB, Vanderbilt: The athletic Cunningham can be a major upgrade at linebacker for Detroit. Cunningham brings three-down ability and a skill set to be an asset in a run and pass defense.

22. Miami Dolphins – OJ Howard, TE, Alabama: Set of solid wide receivers? Check. Primary running back? Check. Reliable tight end? Welp, here is the answer to that last question in a 6’6 target. Howard is athletic and can be a dangerous red-zone threat. 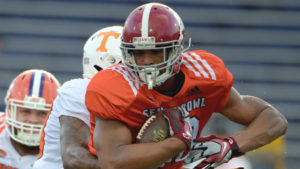 23. New York Giants – Jarrad Davis, LB, Florida: From day one, Davis can be the team’s best linebacker thanks to his instincts and three-down ability. Davis is an athlete at the linebacker spot and has room to grow which makes his potential valuable here at 23rd overall.

25. Houston Texans – Patrick Mahomes, QB, Texas Tech: I’ve said it for months and I will stand by it. Head coach Bill O’Brien can not enter 2017 with all of his coaching hopes placed on Brock Osweiler. The 2016 season showed no glimpse of hope and a passer such as Mahomes can be the future.

26. Seattle Seahawks – Cam Robinson, OT, Alabama: Watching QB Russell Wilson run for his life behind the offensive line this past season should make the front office have a sense of urgency in repairing it. Here is a solid step by getting a mountain of a man to be Wilson’s bodyguard at tackle.

27. Kansas City Chiefs – Sidney Jones, CB, Washington: In a weird twist of irony, the Chiefs call on the former Washington Husky, who took over the #1 CB spot after the departure of fellow Kansas City corner Marcus Peters. In a division with Thomas/Sanders in Denver and Cooper/Crabtree in Oakland at WR, it may not be a bad idea to lock down both corner spots.

28. Tennessee Titans *TRADE ALERT: Tennessee receives: 28th overall/Dallas receives: Two 2016 3rd round picks (68th overall, 101st overall), 2018 2nd round pick* – John Ross, WR, Washington: The Titans are armed with a number of draft picks and to be honest, they are not far away from taking the AFC South division. The offensive side of the ball is addressed with a deep threat in Ross to take the top off opposing defenses. A nice complement to the stellar Titans run game.

29. Green Bay Packers – Christian McCaffrey, RB, Stanford: I don’t have a ton of faith in Eddie Lacy and Ty Montgomery is not lead back material. The amount of attention given to Rodgers and his plethora of receivers gives head coach Mike McCarthy a chance to add even more skill to an offense. 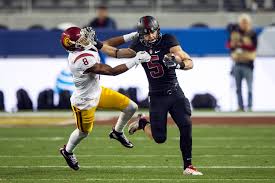 30. Pittsburgh Steelers – Charles Harris, OLB, Missouri: Another team without a ton of holes to fill but prepping the future for the Steelers is in the works with this selection. Harris gives this up-and-coming defense another young pass rusher to terrorize defenses. A Harris, Bud Dupree, and James Harrison trio give Pittsburgh a dangerous rotation.

31. Atlanta Falcons – Caleb Brantley, DT, Florida: The Falcons have improved on the offensive line but there is still room to grow. Especially with a couple of free agent decisions to make at the position. Brantley provides an athletic body at the 3-Tech position as well as more interior pressure with DT Grady Jarrett.

32. New England Patriots – Jabrill Peppers, S, Michigan: Peppers seems like the versatile defender that can thrive under the coaching of Bill Belichick. Peppers offer great value with his return ability as well as versatility to be inserted in goal-line offensive plays.