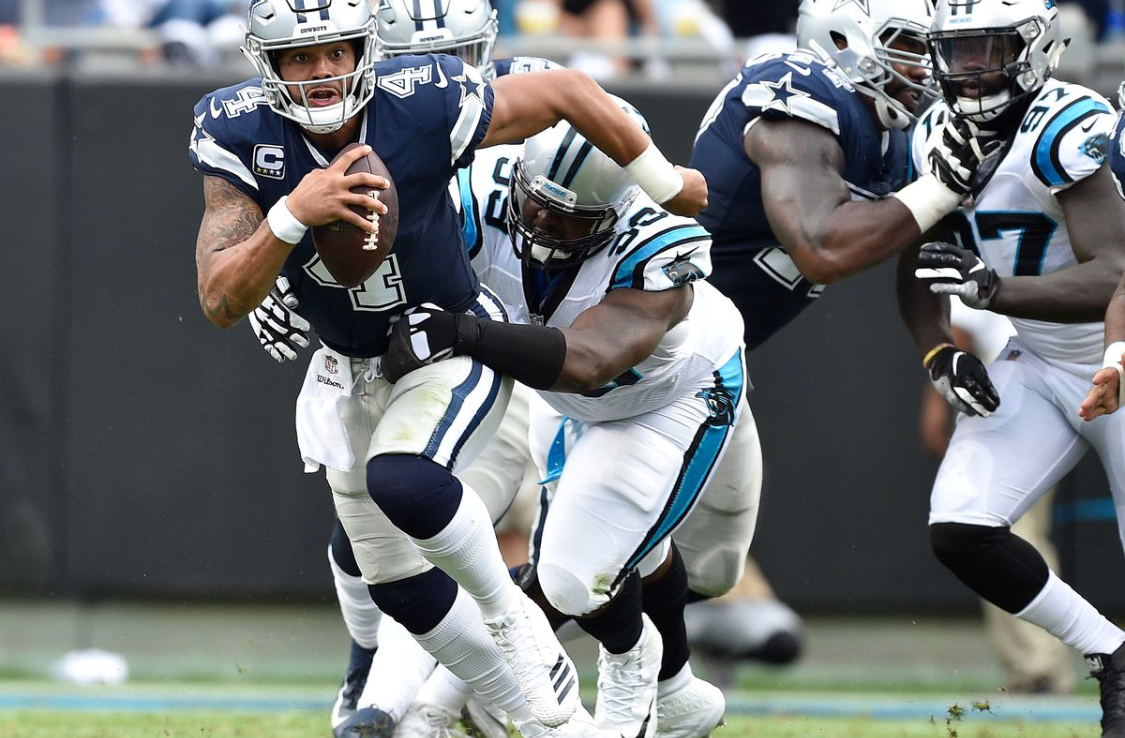 The Dallas Cowboys visited Bank of America on Sunday to open up the 2018 NFL regular season.

There was the good, the bad….and the downright ugly.

The Good: The Panthers defense.
Much has been said about this unit but the effort in Sunday’s game was nothing short of stellar. The Cowboys were held to 42 total yards in the first half and had only amassed 80 total yards going into the fourth quarter.Speaking on the defensive front four, quarterback Cam Newton had this to say:

“Man, those guys wreck havoc; a lot of havoc. And I know I see it everyday in practice and you know, everybody just runs by. Obviously, you can’t hit the quarterback because of that pretty red jersey but you hear em, “SACK”. So now, for it to come into fruition in an actual game, and to see it, you start believing certain things, and you know I’m just happy for those guys.”

In first-year defensive coordinator Eric Washington’s debut, the Panthers held Cowboys star running back Ezekiel Elliott to 69 yards on 15 carries. The Cowboys only converted 2 of their 11 third-down attempts. Quarterback Dak Prescott was 19-29 and was sacked three times. While veteran linebacker Thomas Davis was missed as he serves a 4-game suspension, no doubt he was proud of how his position group picked up the slack.

“He stays in a good position. His plant and drive downhill was excellent. But one thing he did do very well also was he tackled very well. So that was very good to see. He’s a work in progress and he’s gonna get better.”

The Bad:
The Panthers are no strangers to the injury bug. The offensive line has been plagued by injuries for the past two seasons and this trend continued into Sunday’s game. With starting left tackle Matt Kalil out for at least the first 8 games of the season after an arthroscopic procedure on his right knee in late August, tackle Daryl Williams was carted off the field in the fourth quarter of Sunday’s game.

Williams was previously carted off the practice field in July due to a knee injury. At the time, Head athletic trainer Ryan Vermillion diagnosed the injury as a dislocated patella and torn right MCL. Opting out of surgery, Williams returned to practice on September 2. While unable to provide details, Rivera disclosed to media that Sunday’s injury is not a re-injury.

“Daryl injured his right knee when a Cowboys player fell into the side of his knee. After evaluation, it is team physician Dr. Pat Connor’s recommendation that Daryl undergoes surgery to repair the injury.”

Luke Kuechly also left the game briefly in the fourth quarter when his left leg appeared to be hyper extended. He returned shortly much to the relief of the Panthers.

The Ugly:
When Greg Olsen left the game in the first quarter and returned to the sidelines in a boot, there is no doubt that Panther fans collectively winced. Olsen missed nine games last year with a Jones fracture in his right foot. While the boot was on his right foot, it is unknown at this time if it is a re-injury. Either way, this is a huge blow. Olsen declined comment following the game but teammates alluded to preparing for life without Mr. Reliable. Backups Chris Manhertz and Ian Thomas are prepared to step in and step up. Manhertz had surgery in June for a Jones fracture and is confident that he is fully recovered and ready to contribute. Understandably, Olsen and Newton have a familiarity that is impossible to replace, Rivera says that Thomas is prepared and will have to work to build a rapport with Newton quickly.

“Greg re-fractured his right foot against Dallas. There are no plans for surgery at this time. We will monitor his rehab and evaluate his progress on a monthly basis.”

The Panthers travel to Atlanta to take on the Falcons in an NFC South division match-up Sunday at 1pm, EST. The league and teams are watching the weather closely as Hurricane Florence approaches the East Coast.