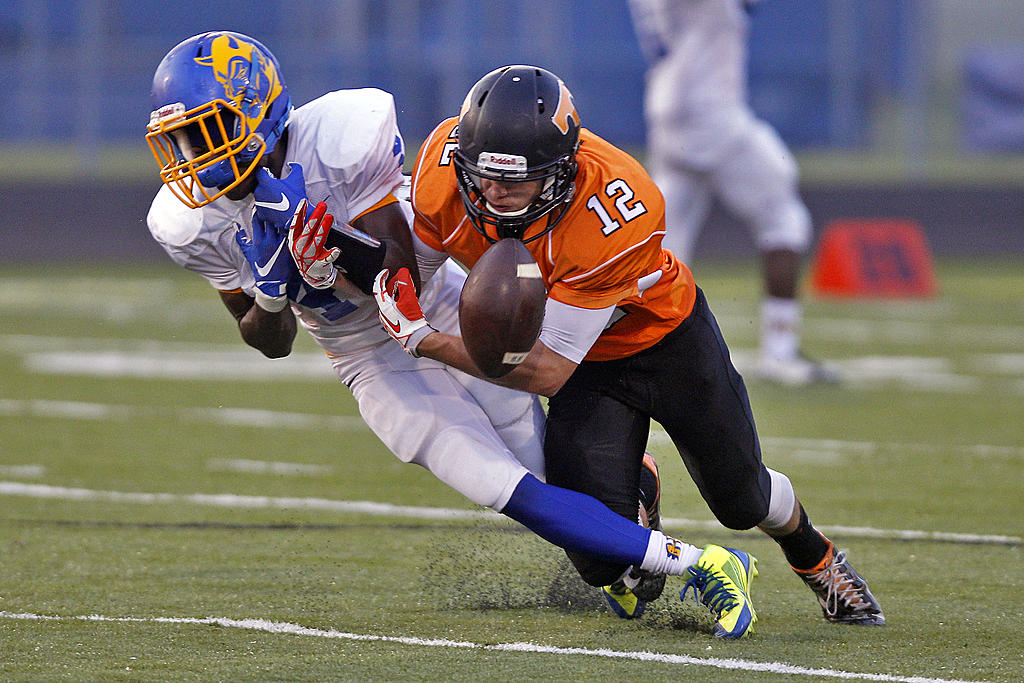 While Hopewell’s Thursday night game August 30 was postponed because of thunderstorms, they provided their own thunder the following night at home against the Tabb Tigers of Yorktown. Exploding to a 34-0 halftime lead, many non-starters were able to see action in the second half.

It was game two of this young season, and though, as of this writing, school is not yet in session, this football team has “schooled” two Tidewater teams in a row by not giving up a point. Even Hopewell’s backup defense shut down Tabb’s starters at the goal line.

While Coach Ricky Irby’s team now receives a bye week before returning to host Powhatan Friday, Sept 7, it was encouraging to see new starting quarterback Daniel Grier find his throwing rhythm last week. He completed 6 of 13 passes for 118 yards, the most noteworthy being the last play of the first half when he rolled out to the right and completed a 51-yard scoring strike to fellow Senior Sean Allen streaking down the sideline.

Sophomore Robert Briggs provided more thunder amassing 129 rushing yards and four touchdowns, all in the first half, on the way to his second week of rushing for at least 144 yards.
Junior Kavieon Cox tallied the lone score of the second half powering into the end zone from 8 yards out for his third touchdown in two games.

The offensive line did a good job with pass protection and in opening holes on this night when the field remained soggy from the night before. They paved the way towards an offensive production three times that of Tabb ( 357-118 yards).

The defense shined as well in notching its second straight shutout. It limited the opposing quarterback to just 1- 10 passing, intercepting him once and sacking him three times. Sophomore Reggie Ruffin initiated the interception, one of the sacks, and recovered a fumble, while Senior Ty- Ja Pollard sacked the QB twice. Ruffin and Senior Zyreon Jones-Walker each had 7 tackles while Senior Nyvonte Coleman had 5 and Cox 4.

Earlier in the week, the city’s past year of athletic success was complemented with word of academic success. Through an outstanding Convocation for City Employees and guests, School Superintendent Dr. Melody Hackney pointed to students’ hard work last year in helping achieve the accreditation of each school. The justified sense of school pride and city success was celebrated by one and all, reinforcing the growing HOPE in Hopewell.

“Whatever you do, do it with all your heart, as working for the Lord…” was spoken by a very hopeful first century city leader named Paul, who encouraged not only athletes, but students, family members, fellow workers, and friends to give it their all for the sake of those around them and the God who inspires them. What a joy to see leaders in our school system and throughout Hopewell inspiring Individual excellence, the community developing a greater wholeness, and so many growing more fully into the image of the One who made us. It is truly a Hopewell “thundering” success story.

With Sept 14 being our next game, your support at home can prove to be vital as Hopewell looks to excel against Powhatan. Arriving at 6:30 you can hear the Hopewell band. Bringing your cell phone, you can listen to the radio broadcast by dialing 605-313-0571