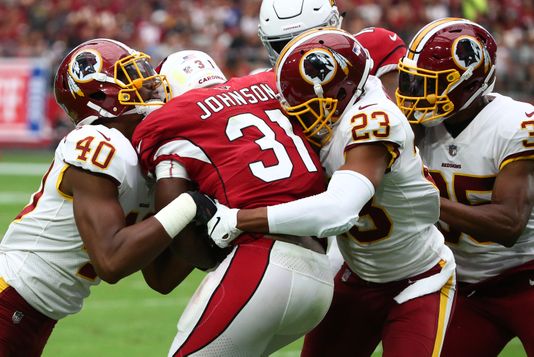 The Washington Redskins put on a dominating performance yesterday on the road against the Arizona Cardinals in their 24-6 victory. The Redskins were physical and were the aggressors during the entire contest. With that game in the rear view mirror, the Washington Redskins now turn their attention towards their home opener against the Indianapolis Colts. I have five questions that need to be asked for the Redskins at this point?

Is Alex Smith a clear upgrade over Kirk Cousins?

The answer to this question is plainly yes. Kirk Cousins has many strengths that are needed in the NFL. Alex Smith also has strengths that are great for an NFL quarterback. Smith has the qualities and strengths that this team has required for a long time. The term moxie is thrown around but that is what we saw from Smith yesterday. Smith threw the ball when needed, ran when needed, got rid of the ball when needed, and took care of the offense. You can sense that Coach Gruden trusts Smith to ad lib and be smart with the football. Smith’s stats don’t blow you away, (21-30 255 yards and 2 touchdowns) however the offense was in complete control of that game and Smith was the main reason for that. Zero turnovers is a stat we all can love.

Can Adrian Peterson and Chris Thompson carry the offensive load all season?

The answer to this one is no. Adrian Peterson had 26 carries for 96 yards and a touchdown and two receptions for 70 yards and Chris Thompson had five carries for 65 yards and six receptions for 63 yards and a touchdown. For Thompson that is right around the usage rate the Redskins want from him. Peterson loves the 26 carries however I think the Redskins need to keep him around 20 carries a game. Fans however loved Gruden’s commitment to the run yesterday and the time of possession was 38 minutes to 22 in favor of the Redskins. I think Rob Kelley could take a few carries from Peterson to keep him fresh throughout the season.

Will the wide receivers contribute more to the offense?

The answer is yes because they are going to have to. Against an aggressive defense like the Cardinals the plan was short throws and a power running game at their smaller linebackers. Obviously the plan was working so Coach Gruden didn’t vary from it yesterday. When defenses start loading the box and trying to take away Peterson and Thompson that is where Josh Doctson and Paul Richardson will shine. We have seen just the tip of the iceberg of Gruden’s offense and he will start to feature others when defenses adjust.

Has the improved defense become better at stopping the run?

This answer is yes but with caution. The Redskins rush defense was the worst in the league last season so obviously the team can only get better or stay the same. The first test was a rousing success against David Johnson and the Cardinals. Johnson was held to 37 yards and the Cardinals as a team only rushed for 68 total. This may have been the best sign from the young defense that they never let Johnson and the rushing attack get a rhythm in the game. Soon the offense was up three touchdowns and a half had expired so the team could shift focusing on the pass.

Are the Redskins a playoff team?

The answer is not enough information is known or for a better phrase slow down. This was the team’s first opening day win since 2012 and that year the team won the NFC East behind Robert Griffin III. People also forget after that opening win that the team went 2-6 before going on a seven game run to win the division. This win, as are all wins are important for teams in the NFL. The Redskins will now be a clear favorite at home versus the Colts and must deal with expectations. The Redskins haven’t handled prosperity well in the past and this will show if this team is truly different from before. Win against the Colts and then you get Aaron Rodgers, who probably won’t be 100%, the Redskins have a shot at a 3-0 start.