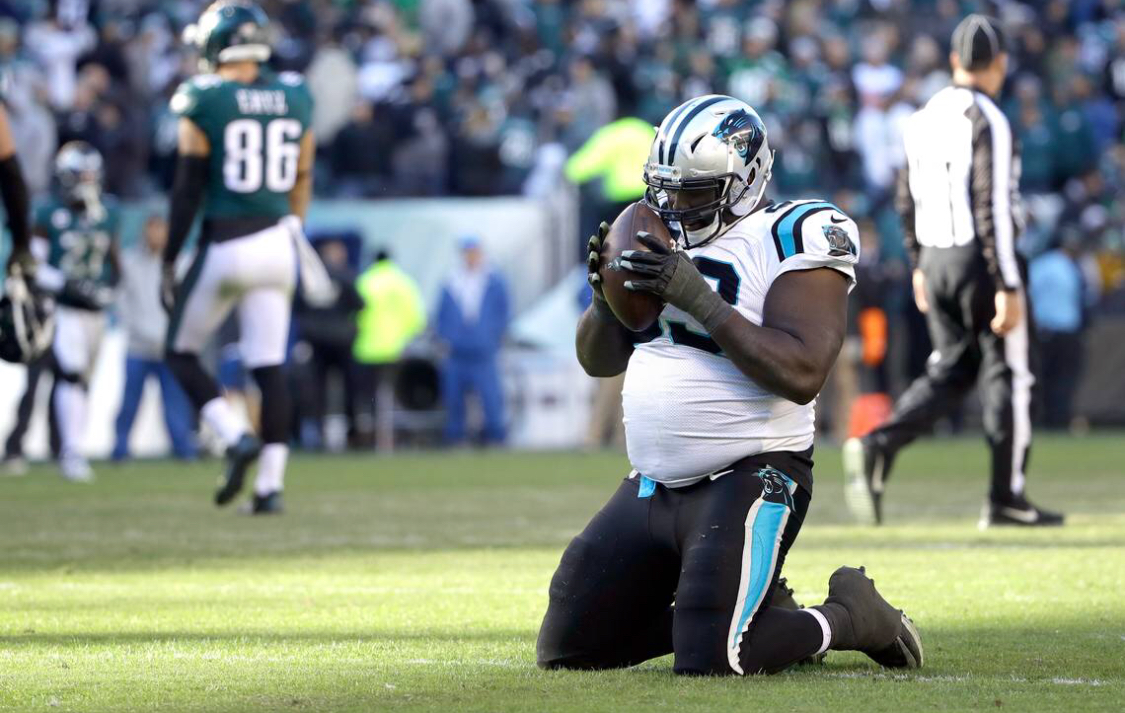 With gusty winds and their backs against the wall, the Carolina Panthers came back swinging. After failing to score for the first three quarters, the Panthers scored 21 points in the 4th quarter to best the reigning Super Bowl Champions 21-17 at Lincoln Financial Field.

The first half of the game was the Zach Ertz and Alshon Jeffery show as the tight end and wide receiver had their way with the Panthers defense racking up 78 and 77 receiving yards respectively. The first half struggles were not made any easier when the Panthers knocked themselves out of field goal range in the second quarter with a pair of false start penalties.

In addition to battling the wind, both teams struggled on third-down conversions. At the half, the teams were a combined 1-10. Even more alarming is the fact that the Panthers had 83 total yards of offense and 19 offensive snaps as opposed to the Eagles’ 35. After a third quarter in which the Panthers only had the ball for one series and a total of 4:59, Cam Newton and the Panthers fielded the kickoff facing a 17-0 deficit with only 15 minutes to work.

As with other games this season, the Panthers seemed to come alive in the fourth quarter getting on the board at the start of the 4th quarter courtesy of Curtis Samuel’s 14 yard rushing touchdown. Kicker Graham Gano missed the extra point attempt making the score 17-6. In Gano’s defense, the kick sailed wide right, as did Eagles kicker Jake Elliott’s 36 yard field goal attempt in the first quarter into the same end zone. Strong, gusty winds may have been a factor in the misses.

After forcing the Eagles to punt on their next possession, the Panthers drove 69 yards with Newton connecting with receiver Devin Funchess for a 7 yard score and again on a two-point conversion.
Down 17-14 with 2:17 remaining in the game, the Panthers drove another 69-yard drive that took just 55 seconds off the clock. This time Newton found tight end Greg Olsen in the end zone for the 1 yard touchdown.

This was the fourth game in this young season that “Cardiac Cats” found themselves in a battle that was decided in the final minutes of play so fans knew not to breathe easy just yet. The game looked to have a wild finish as Panthers cornerback James Bradberry was flagged for pass interference at the Carolina 22-yard line; a 48 yard penalty. Quarterback Carson Wentz set up shop in the red zone with a little over a minute and a fresh set of downs. With the Eagles facing 4th and 2 from the Carolina 14-yard line, Panthers defensive end Julius Peppers forced Wentz to fumble and the fumble was recovered by Panthers tackle Kyle Love, sealing the biggest comeback in Panthers franchise history.

While the Panthers defense showed a need from improvement in certain areas, linebacker Luke Kuechly stood out as he led the team with 14 tackles, 4 for a loss, 1 sack, and 1 quarterback hit. Linebacker Shaq Thompson and safety Eric Reid added 8 tackles apiece.

Eagles head coach Doug Pederson told the media that following the team’s collapse, he told them the pressure is now off. “Nobody on the outside world is giving us a chance to do much of anything. Pressure’s off, so we can go play, have fun, and just relax.” Wentz also spoke about the pressure following a Super Bowl season.

“This town and the way I carry myself, the way everyone in that locker room (carries themselves), we put high expectations on ourselves every week. Whether we are 7-9, like my rookie year (or) on that hot stretch last year, it doesn’t matter. I think we put high expectations on ourselves. My approach will never change, win or lose, on to the next week and that’s the way I’m going to approach it.”

A few doors down, Newton spoke on the Panthers hot first quarter and on whether this was a statement win.

“I feel like just our edge at some particular times is being in a hurry up. And coach always says it, being in a hurry up doesn’t mean rush, doesn’t mean mayhem, it’s just controlled tempo and we are in control of that. When we got in the second half, things started to change for us. Just getting completions for my part and getting the ball in the right guy’s hands.

“I think every win is a statement win. But I think we were against the ropes to a degree. We didn’t have a good performance in the first half. We understand that, we know that, we know that can’t happen especially versus a good team like this. But moving forward, this is a confidence booster for us. Something that you can accelerate production offensively, defensively, as well as special teams.”

The Eagles fall below .500 at 3-4 while the Panthers improve to 4-2 and prepare to face the Baltimore Ravens on Sunday at Bank of America Stadium.