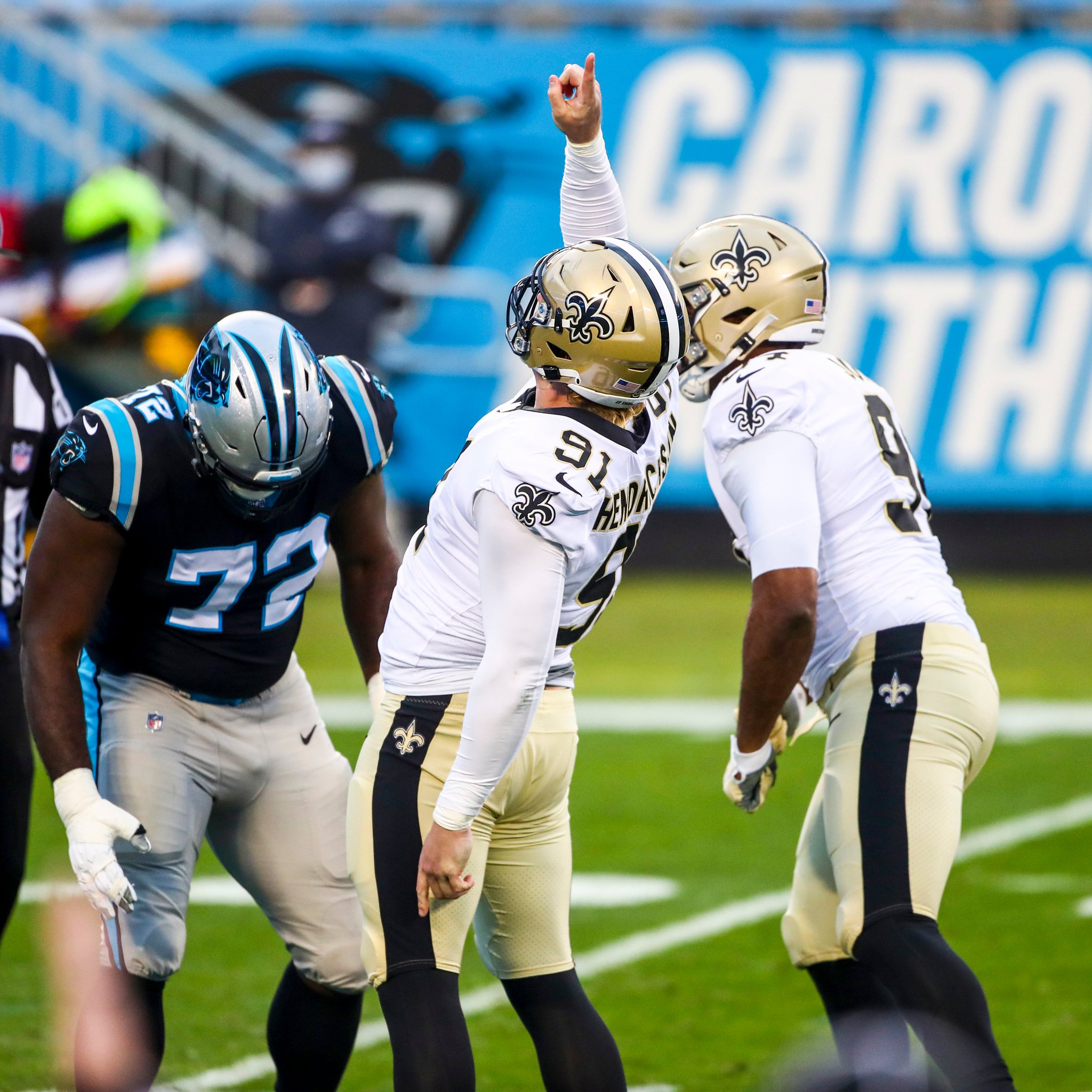 A shorthanded New Orleans team traveled to Charlotte on Sunday with hopes of taking care of business and doing its part to clinch the NFC No. 1 seed in Week 17.  The Saints would have to do so without Alvin Kamara – and the entire running backs room – due to Covid 19.  Kamara would have been coming off his NFL record-tying 6 touchdown performance on Christmas Day.  The Panthers had their share of players out as well with running back Mike Davis, defensive end Brian Burns, and rookie cornerback Troy Pride Jr all out of the season finale.  Nevertheless, the Saints had business to handle.  With a win against the Panthers, the Saints would need a Green Bay loss and a Seattle win to sew up home field advantage.

After two forgettable drives to open the game, the Panthers trailed 7-0 before running back Rodney Smith scored from one yard out with 1:40 left in the first quarter to even the score.  With a little under 11 minutes left to play in the half, Panthers quarterback Teddy Bridgewater was intercepted by Malcolm Jenkins who returned the ball 48 yards to set up the Drew Brees’ second touchdown pass of the afternoon a few plays later – this time an 8 yard strike to Emmanuel Sanders.  A 33-yard field goal by Will Lutz pushed the Saints lead to 9 going into halftime.

Coming out of the break, the Saints rattled off 10 unanswered points beginning with a 48 yard field goal by Lutz on their first second half possession.  After an insane DJ Moore catch between two Saints defenders, the Panthers found themselves in the red zone courtesy of the 44 yard gain.  The drive was snuffed out as Bridgewater threw his second end zone interception of the day on the very next play from scrimmage.  PJ Walker entered the game at quarterback on the Panthers next possession and Bridgewater was seen on the sideline with what appeared to be ice on his right ankle.  Walker’s fortune was no better as he was picked off by Marshon Lattimore when a pass slipped through the hands of Curtis Samuel.  Three plays later, a Taysom Hill rushing touchdown pushed the Saints’ lead to 26-7.

On the very first play of the fourth quarter, Brees connected with receiver Austin Carr for an11-yard touchdown and safely tucked the game away with a 33-7 lead as the Panthers would get no closer. It was a rough day at the office for both quarterbacks and Walker was intercepted by PJ Williams after being hit hard.  James Winston entered the game at quarterback for the Saints with just over four minutes remaining.  As if things  could not possibly get worse, Walker threw his third interception on the Panthers’ next play from scrimmage.  Walker finished 5-of-14 for 95 yards and threw three interceptions en route to a QBR of 20.5.  Bridgewater was 13-of-23 for 176 yards, two interceptions and a QBR of 44.8.  Brees finished 22-of-32 for 201 yards, three touchdowns, and a QBR of 116.8.

The lone bright spot for the Panthers was Curtis Samuel.  The wide receiver, who is in a contract year might I add, surpassed 1,000 all-purpose yards on the season.  He had 95 receiving yards in the first half alone and finished with 121 scrimmage yards for the game.  The Panthers finish the season 5-11 while the Saints move to 12-4 and await seeding later in the day.