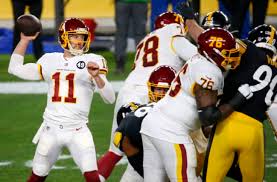 Well week 17 is finally here and Washington has a chance to win the NFC East. Who would have thought that at the beginning of the season. Actually I had Washington at 8-8 which isn’t that far fetched as we now see. Check out that article from September on the link above. However Washington just needs to secure a victory against the eliminated and in flux and turmoil Philadelphia Eagles. It sounds easy on paper but games are won on the field. Here are my three keys for Washington to secure a victory tonight against the Eagles.

One of the bright spots in an otherwise dismal year has been the play of Jalen Hurts. The calls for the benching of Carson Wentz finally happened and Hurts has had some good moments. In the Eagles best win of the season, they upset the Saints with good play from Hurts. Hurts best talent is his legs so Washington needs to contain him in the pocket. Unfortunately for Washington’s vaunted defense, they have given up 50 or more rush yards to four mobile quarterbacks: Kyler Murray, Lamar Jackson, Daniel Jones, and Russell Wilson. If Washington can hold Hurts under 50 yards rushing, Washington should win.

Alex Smith and Terry McLaurin look to return for Washington tonight. And with being said Washington needs to run the ball. Antonio Gibson ran 10 times for 61 yards last week and his carries need to double. Take pressure off of Alex Smith and the passing game feeding the ball to Gibson and JD McKissic. The Eagles are depleted on the defensive side so Washington needs to impart their will from the start. If Washington can have 30 rushes tonight, the chances for winning increase tremendously.

No flat starts. That should be the motto for tonight. The Eagles are resting plenty of starters but these younger guys have something to prove and are fighting for roster spots. The best way to alleviate a tough close game is to come out and jump on them. Take the lead from the start and stay on top of them. They were able to do that in the Dallas game earlier in the season and need to do that tonight. After all this season has had to offer, Washington deserves a drama free clean game. And what a better time to do that than tonight with a division title on the line.

The Eagles will have pride and Jalen Hurts will make a couple of plays. However Washington will force two turnovers and pull away for a division clinching win. Washington 27 Eagles 14