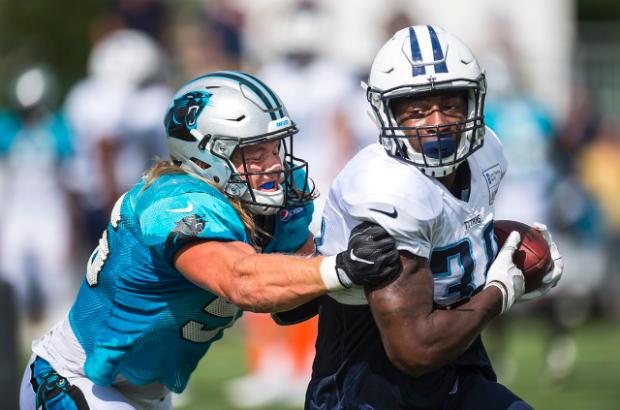 As training camp has winded down for the Panthers, they’ll embark on a new task.

MEMPHIS, Tn. — Starting tomorrow and Thursday Carolina will have joint-practices with the Titans in Nashville. Regardless, of the conclusion of camp, head coach Ron Rivera wants his players’ mindset to stay the same.

“Camp is not broken,” he said. “I’m trying to get these guys to understand we are still in camp-mode and there’s a lot things we still have to do.”

One of biggest stories from this year’s camp is how Cam Newton was very limited after the first week. Prior to going to Nashville, Rivera made it clear that being precautions is key.

“Cam will do as the trainers and doctors permit. That’s what Cam will do.”

In the last few days, Newton has shown flashes here and there, however, Rivera continues to reiterate that he’s still getting into a rhythm and this is all a part of the process.

“That’s something he will work through and it’s all a part of it. It’s about getting his rhythm and timing back with the whole group. I believe the other day he looked very good. You could see it today, he was off here. He was off there.”

It’s unlikely Newton will be a major factor during the Panthers time in Nashville. In addition, it’s no reason for him to risk getting injured during a meaningless preseason game to the veteran quarterback.

Moves Made by the Panthers:

“I’m extremely excited,” he said via press released by the Panther PR department. “Everybody knows how i feel about being  a Carolina Panther. This extension solidifies me being here for the rest of my career, I’m excited about that. Now (I’m) totally focused on winning a Super Bowl.”

In addition, linebackers coach Al Holcomb praised Davis’ intensity and mentioned that he’s still able to play at a high-level. Davis played for the Panthers his entire career since being selected 15th overall in the 2005 NFL draft.