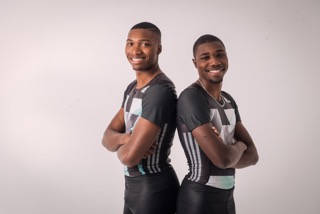 In a sport where timing is everything and every second counts, the Lyles brothers have found themselves climbing the ranks. Turning professional right out of high school, the brothers accomplished a feat that they are believed to be the first set of male sprinters do.

Signing eight-year contracts with Adidas in July of 2016, the brothers have continued to make names for themselves in the sport of track and field. Their goal is straightforward… to be the best ever. This includes aiming to set world records.

Their quest for being the best led them to accept the offer from Adidas to turn professional when Josephus was 18-years-old and his elder brother Noah was just 19. The brothers bypassed collegiate track scholarship offers they received from many schools with the most notable being the University of Florida, Texas A&M, USC and the University of Oregon. Initially, the brothers had narrowed it down to Florida and Texas A&M, but eventually, after speaking with their family, decided that the pro route was best for their careers. However, something very important to the Lyles and there was the education stipend that was included in their contract with Adidas. The young men are given their education stipend every year of their contract, that they can use at any time for any college.

The Lyles seem to have it all mapped out.

So who exactly are these brothers who want to be the next big thing in track and field?

The Lyles are used to being lumped together. “If you meet us for the first time you might think we’re twins,” said Noah. The brothers who are separated by a mere 369 days and one minute are very close. “But once you actually look at us we look completely separate,” added 20-year-old Noah. This is the exact case as with a closer look, it is easy to separate and identify the brothers.

“Our strengths are completely different,” said Noah. Josephus, 19,  who stands a full head and shoulders above his brother at 6-2, 185 lbs, with visibly large muscles bulging from his body and very long arms, is the largest of the two. His large frame makes him a power sprinter. Noah said though his brother is larger, “Josephus has the strength to keep pushing.” Noah, who is 5-11, 156 lbs is considered a light sprinter, who is light on his feet. “I can get up to top speed quicker than some people and I can hold it a lot longer because I don’t have so much weight that tires me out when I run,” said Noah.

“They went from living at home to totally being independent,” said their mother Keisha Caine-Lyles. With being totally independent this meant that Noah and Josephus had to be completely self-sustaining in all facets of the life that laid ahead of them. They had to go from completely relying on their mother’s cooking to having to fend for themselves. Mom’s biggest concern was none other than worrying about how her boys would eat.

Though Keisha encouraged the boys to get outside help to assist with cooking and to have groceries delivered, the boys expressed pride in doing things for themselves. While Keisha had begun looking up ways to have groceries delivered, to her surprise, it was of absolutely no interest to the boys. “We actually kind of enjoy this stuff,” said Noah. The boys chuckled as they heard their mother tell back the story of how surprised her friends were that they could do everything necessary to feed themselves. “It’s funny because I remember one-time mom said you should get a cook,” said Josephus. A cook is nowhere in the brother’s plans. To keep in top shape, the brothers’ diet involves entirely around consuming and cooking organic food.

Josephus got injured at the end of last year after tearing a muscle in his hip. “This year, I’ve been coming back from that which has been fairly difficult. At the beginning in January I wasn’t even sure if I would compete this year but, I’ve just been trying to grind and get my strength back and get my hip right,” said Josephus. This was Josephus first major injury in his pro career. “It’s been going really well. It’s progressed fairly quickly, especially since the doctors didn’t expect it to heal,  nor be able to grow and strengthen it as I have,” added Josephus. Josephus was able to recover in about 6 months, and a few more months to get his hip back strong. The boys were homeschooled until the middle of second grade. While Josephus most recently faced injuries Noah’s injuries came on early in his life. From the time he was born Noah has suffered from asthma flare-ups. It got bad enough to where his mother felt he needed to repeat first grade because he was in the hospital a great deal. This also meant early on he could not participate in sports. Eventually, his asthma got better and he was able to participate in many sports with his brother including swimming, basketball, gymnastics soccer and baseball.

The duo had stellar carriers at T.C. Williams High School. From state and national titles, the pair dominated the Virginia track scene. Josephus has many honors including four national championships, No. 2 in the world for the Under 17 team, youngest male member on the World Junior team as a freshman in high school and these are just a few of his accolades. Noah held the indoor and outdoor 200m national record, 300 and five national championships. Add this to the fact that the pair were born to two-track stars in their parents. The boys come from a track bloodline.

Their mother, a native Washingtonian ran track for Woodrow Wilson High School before accepting a track scholarship offer to run for Seton Hall University, where she was a 10-time All-American. She met the boys’ father Kevin Lyles when she was running for Seton Hall. Their dad was a world champion in 1995 on the 4X400m relay. He ran for Adidas professionally three years after college. They also have an aunt who ran track for the University of Pittsburg. An uncle who just fell short of making an Olympic team.

Pro contracts have not changed the brothers’ humble beginnings. Their mother Keisha boasts about how the boys cook their own meals. That’s right… no cooks for these pros. The brothers described their cooking situation quite simply. The brothers eat a great deal of organic food and do the organic cooking. “We want to make sure we’re putting good stuff into our bodies,” said Noah.

On this journey together the brothers have formed something unique.

The brothers describe themselves as each other’s motivation. “It’s been extremely helpful having someone else there. Most of the things that people even some of the older pros feel confident to do by themselves, it’s very helpful to have someone else there to do it with you,” said Noah.

“One person might compensate on one day for the other. On days when we’re in practice or just training really hard you always have someone to help and pick you up and say alright you got this let’s go,” said Noah.

The boy’s mother Keisha believes the two staying together is vital. “They need to stay together they are still really young. They balance each other out. Josephus weaknesses are Noah’s strength and vice versa.” Their mother visits them about every two weeks.

The brothers future does not start and end on the track. Noah discussed how he’s really big into helping kids. “I eventually want to do something that is going to help more kids get into and participate in sports. Especially since football is known as a brutal sport I believe the track is something that could take its place. Everyone loves to run so I’d like to get more kids running.”

Noah also excels at art. He designed the uniform he wore in the Olympic trials and he gets a request from other track teams to design uniforms, though he has not yet had time to design uniforms. Josephus on the other hand, is an avid reader, with a passion for learning. He studies the actual sport and history of track and field.

“Going pro and living this lifestyle is a fun experience and it’s always better when you have someone else to do it with,” said Noah. The brothers constantly smiled and laugh upon each other’s answers. “It has been a very good journey with my brother I wouldn’t trade it for the world,” said Josephus.