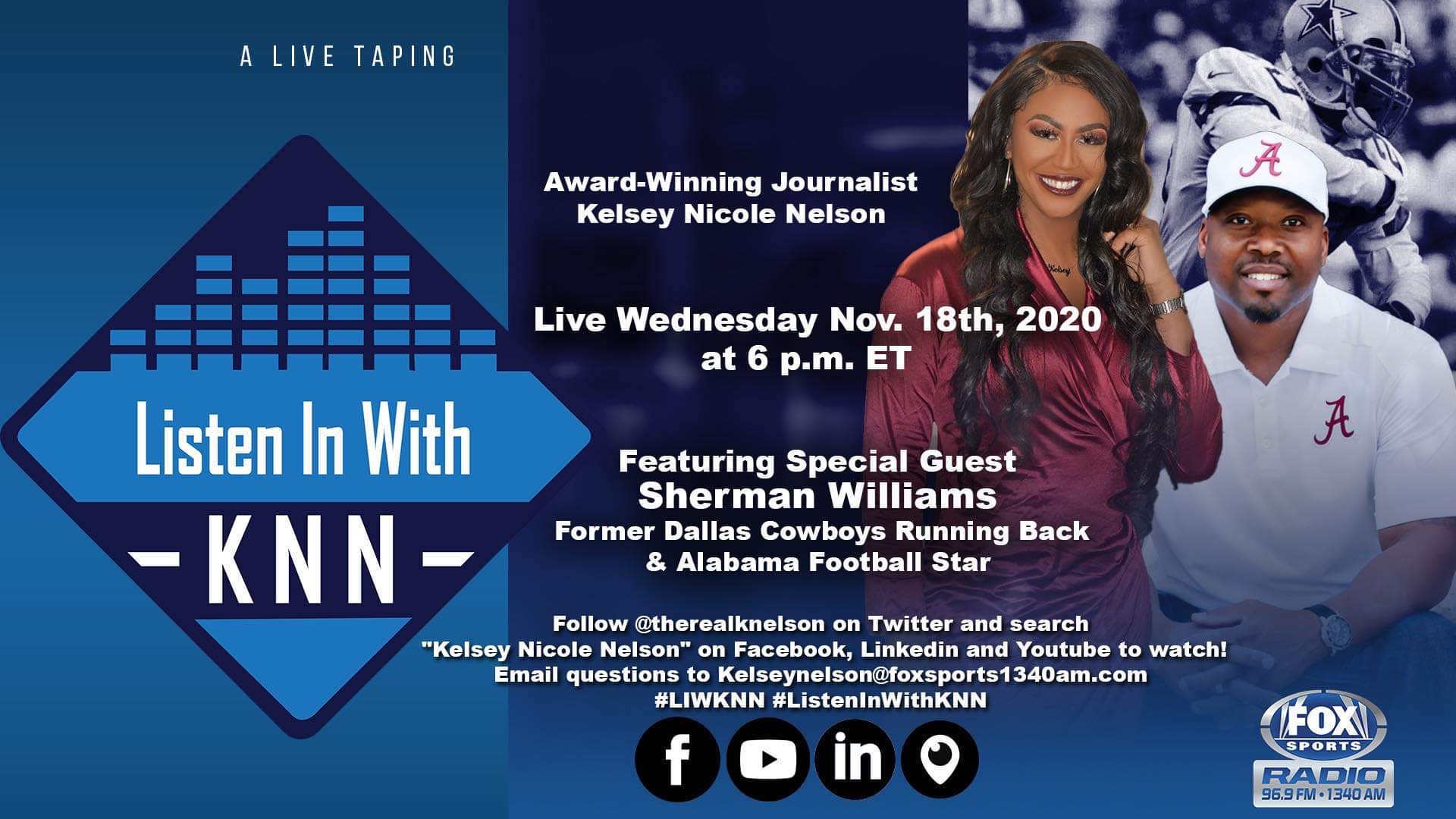 On the latest episode of Listen In With KNN on Fox Sports 1340AM, host Kelsey Nicole Nelson welcomed former University of Alabama and Dallas Cowboys running back Sherman Williams to the show.

He was born and raised in Mobile, Alabama and loved playing football, which was the number one sport in his home state. His mother was a Dallas Cowboys fan and then he became a fan of the team when Tony Dorsett was playing. After winning a state championship at Mattie T. Blount High School, Williams made the commitment to go to Louisiana State University (LSU) but later changed his mind and ended up at the University of Alabama.

“LSU was closer in proximity to my hometown than the University of Alabama. I grew up an LSU fan and talked about it in my book called ‘The Crimson Cowboy’ about how the recruiting process came down to a decision the night before National Signing Day. Once I did get a chance to experience a visit on the campus in Tuscaloosa, my whole objective changed,” he said. “When I saw the tradition and saw the players, camaraderie, coaches and the whole establishment, it just made me change my mind. It was going to be a championship atmosphere.”

At Alabama, Williams became an All-American and was part of the All-SEC team. In his sophomore year in 1992, the Crimson Tide were ranked 23rd in the preseason poll and then won the SEC Championship against Florida. As a result, they clinched a spot in the National Championship Game versus the Miami Hurricanes in New Orleans, Louisiana. They pulled off a huge upset as they defeated the Hurricanes 34-13.

“We got to the game down to the Sugar Bowl in New Orleans and I scored the first touchdown of the game and did my Sherman Shake. When I did it, everyone in the crowd just went crazy and the players on the sidelines got more confident that we could win the game. It was a life lesson that you never give up on your ideals and thoughts and hard work pays off,” Williams said.

When his college career ended in 1995, he was selected in the second round by his favorite team, the Dallas Cowboys. Williams was part of a talented team that won it’s fifth Super Bowl in franchise history.

“We had several Hall of Famers that played on that championship team in Deion Sanders, Troy Aikman, Emmitt Smith, Michael Irvin and Charles Haley. Just to be part of an organization that had so much talent and being able to witness it live was a dream come true,” he said.

Williams took pride in representing the University of Alabama in the NFL. Currently, there is a starting player in every position that was a Crimson Tide alum.

“Coach Nick Saban is doing a great job of getting players prepared to get to the next level. I remind people that we were winning championships before I went to the University of Alabama. Alabama is traditionally a football program that has won a national title in every era and not many universities can say that,” he said.

Williams is also an author of a book titled ‘The Crimson Cowboy: The Rise and Fall of a Three-time Champion.’ The book is about his life journey from serving federal prison time to giving back to his community.

“That’s one of the blessings of going through something and having a testimony because if you have a testimony, then you’re able to testify. I feel grateful that I’m able to get out in front of people in all types of environments and use my experience as a tool to be able to help encourage other people who have been in a similar situation but just didn’t know how to express it,” he said.

Williams wants to be remembered as a person who overcame hardships and made a difference in the world.