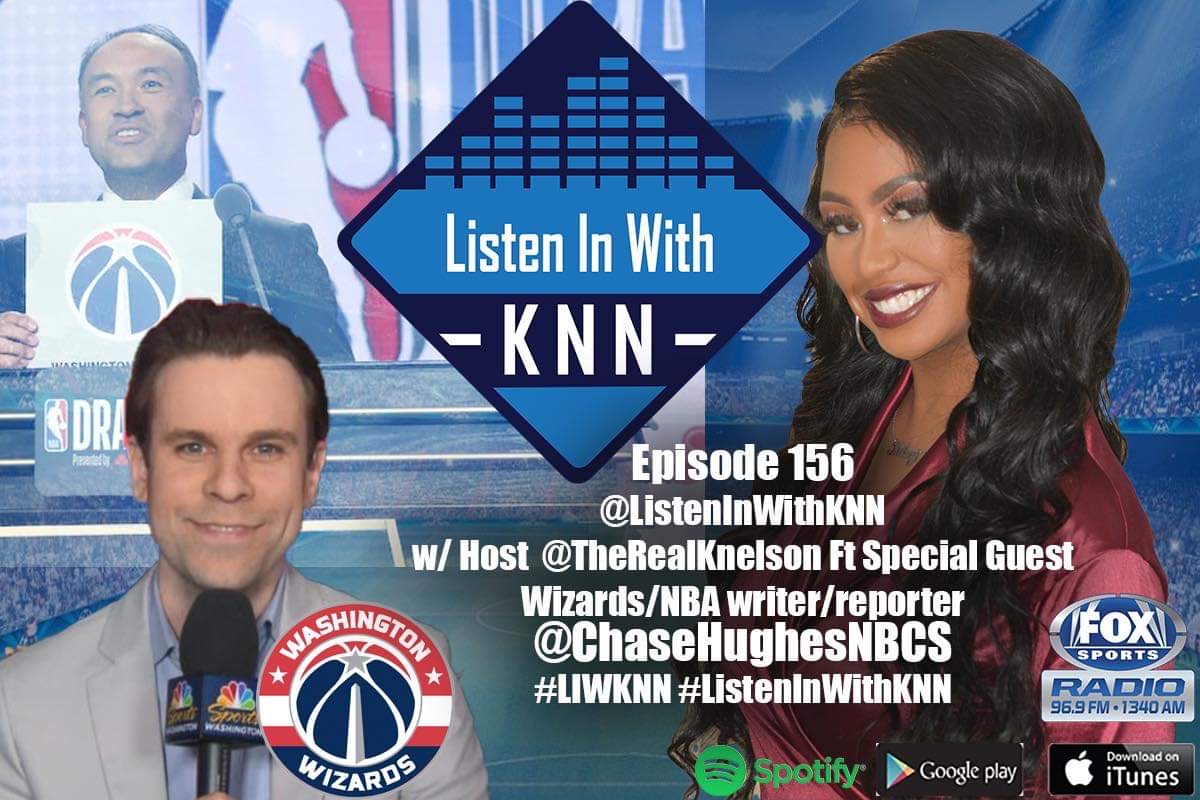 On the 156th episode of Listen In With KNN on Fox Sports 1340AM, host Kelsey Nicole Nelson welcomed Washington Wizards and NBA writer and reporter Chase Hughes to the show to talk about the NBA Draft and the Wizards outlook for the 2020-21 season.

Speaking of the Draft, it was held virtually on November 18th and wasn’t the typical draft where there’s usually a bunch of trades. The first three picks were Anthony Edwards to the Minnesota Timberwolves, James Wiseman to the Golden State Warriors and LaMelo Ball to the Charlotte Hornets.

According to Hughes, Minnesota’s selection of Edwards was about who would fit with their young stars in Karl-Anthony Towns and D’Angelo Russell.

“Edwards is the slasher at the small forward/shooting guard spot. There’s going to be some questions that he’s got to answer about his defensive consistency and admitted to lacking focus on that end. He only shot about 40 percent from the field and in the low 30s percentage from three,” he said. “As long as he can improve his shot, I think he’s going to be an All-Star in the NBA.”

LaMelo Ball was one of the top players in this year’s draft with high upside after spending a year professionally in Australia. He’ll join a Hornets team that has athletic players in Miles Bridges and P. J. Washington.

“With a distributor like LaMelo Ball in there, then everyone all of a sudden is going to look a lot better. They’re one of those League Pass teams that you wanna go check on. Back in the day, they pumped out stars left and right like Baron Davis, Alonzo Mourning and Jamal Mashburn,” Hughes said.

The Wizards selected 19 year old and six foot nine small forward Deni Avdija from Maccabi Tel Aviv despite being projected to go in the top five. He has a high ceiling because of his versatility on both ends of the floor.

“They’re taking the long view because they could’ve gone in and tried to find a player that would have an immediate impact with the urgency that is there with John Wall and Bradley Beal as they want to win now. There is some sense to take the guy who fell to them on the board and you can argue was the best player available. You gotta have some trust in (general manager) Tommy Shepard as he got it right last year with Rui Hachimura,” he said.

John Wall will be coming back to the team after missing the past two years recovering from a ruptured Achilles tendon and an infection from a heel surgery. His backcourt mate, Bradley Beal has ascended to stardom during his absence by taking on a greater share of the offensive responsibilities.

“He (Beal) is a primary ball handler now who can handle the ball, pass, playmake and create his own shot. I think it should be Bradley Beal’s team and you’re hearing Tommy Shepard talk in those terms. Defensively is where I worry about Wall because he’s coming back at the age of 30 from an injury that affects your lateral movement and it’s going to be really tough to stay in front of NBA point guards. I don’t think they’re a playoff team until they shore up the defense,” said Hughes.

The 2020-21 NBA season will begin on December 22nd with a 72 game schedule. Their goal is  to recalibrate the calendar so they can get back to a normal NBA schedule which is from the Fall to Summer.

“They’re trying to get things wrapped up before the Olympics so that some of their guys can go to Tokyo in 2021. The most interesting thing we’re gonna see from that is what happens to these teams that just finished playing like the Lakers and the Heat. 72 games isn’t half of 82 games but it is fewer games, which means they’re gonna mean a little bit more and the playoff race will be a little bit more interesting,” he said.